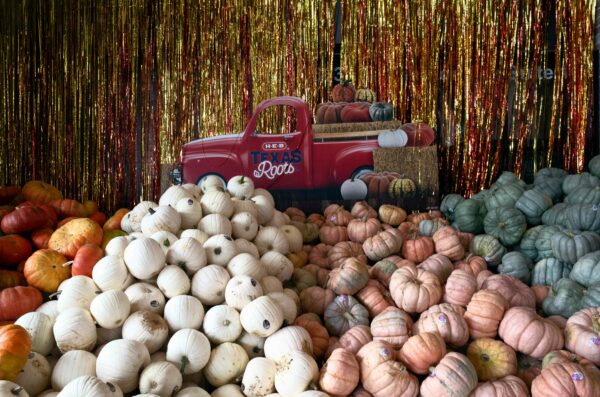 In some climates autumn is abstract, marked primarily by the reemergence of Halloween stuff on shelves and in lawns. Though I write now beneath a canopy of yellowing East Coast leaves, I have lived mostly through hypothetical falls. Ghosts have been vital to my understanding of the calendar. Also, if I think back over everything I have written for Glasstire, I strain to remember an essay where I did not use the word “goblin” at least once. With all that in mind, it is no surprise that this simple story of autumnal loss has danced its way, as if atop a planchette, toward something a bit more spooky.

I last wrote here about two eager cartoon pandas who HEB uses to sell its in-house toilet paper. They are printed on plastic wrapping, and are struggling to carry a Texas Size Mega Roll. As I explained, the pair are more dignified and more confusing than the degenerate Charmin bears from which they were likely derived. While the cartoon bear family in Charmin advertisements is explicitly excited to wipe, the HEB pandas are simply obsessed with the concept of “big.” That last essay received a positive response. A friend in San Antonio sent me images of the pandas doing different activities on the packages for other varieties of HEB TP; if memory serves, the company’s “strong” paper features one of these animals deadlifting two rolls on opposite ends of a barbell. That type of thing. There was clearly more for me to investigate. Luckily, after several months away from Texas, I had plans in Houston. I put HEB at the top of my list.

Brightly lit freezer cases and cubic miles of unscented air welcomed me home after a summer of annoying Brooklyn supermarkets. I smiled near the automatic doors and pocketed a complimentary sticker of HEBuddy, the store’s inexplicably gleeful paper bag mascot who shows up only once in a while. I meandered. I took it all in. I kept a wide breadth from a maskless maniac who had filled his shopping cart with eggs. Then I poked a tortilla. It was bliss. 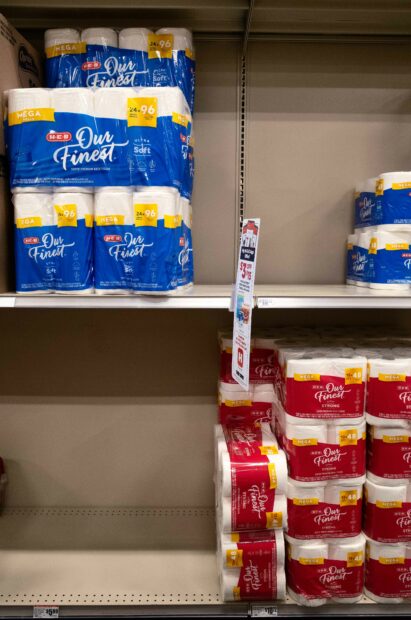 But soon, a problem. There were no Texas Sized Mega Rolls in the store. Large cavities dotted the generic section of the toilet paper aisle. My heart raced, and I paced the shelves in a subdued frenzy long enough for people to notice. Each and every store brand product lacked pandas. Some of the HEB toilet paper packages were labeled “Our Finest,” a clear misnomer in the absence of the very, very fine pandas. I was worried about them. Had they been phased out in my short time away? Had my last essay been an unwitting elegy? The damn Charmin bears, meanwhile, were everywhere. My thoughts spiraled toward an imaginary lawsuit — I convinced myself that those scatological maniacs sued my pandas out of existence for copyright infringement. But of course Charmin, or its parent corporation Proctor & Gamble, cannot have dominion over all marketing bears. The comfortable Sleepytime fellow is firmly in the pocket of Hain Celestial, for instance. No, bears are for everyone. HEB could stand for Here’s Everyone’s Bear, but not on this occasion. I was in a pickle: I had come to HEB to learn more about pandas, and yet I found no pandas. 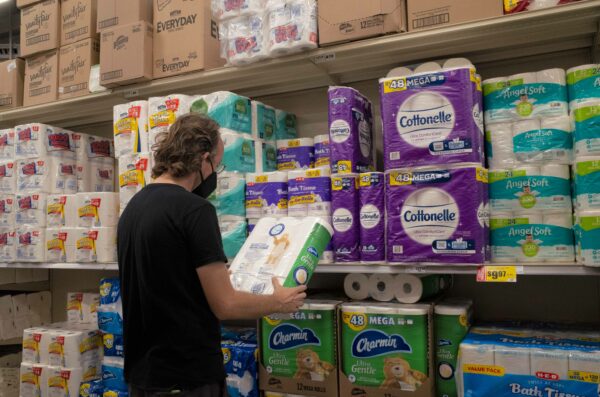 My panic-driven solution was to buy a twelve-pack of Charmin toilet paper and a twelve-pack of the panda-free HEB “Our Finest,” walk them down the street to a cemetery, and ponder my quandary further at the grave of famed eccentric Howard Hughes. On the way, I saw something that reminded me I was in Texas. 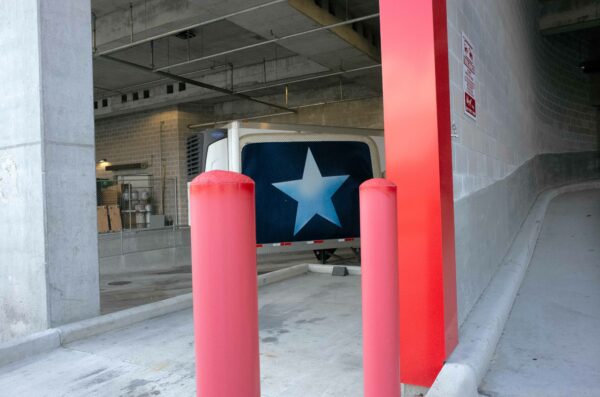 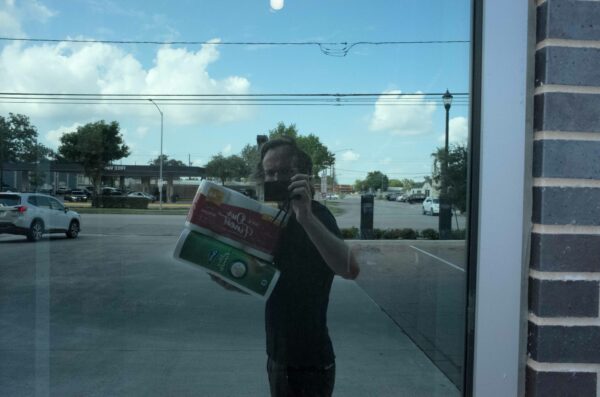 An even smaller number of people schlep twenty-four rolls of toilet paper across town, so I was unsurprised when a security guard yelled at me as I strolled through the cemetery gates with my arms entirely full. He asked what I was doing with all that paper. I told him I had just been to HEB and was stopping by the cemetery to have a look. He said he guessed that was ok, but he seemed very confused. I was afraid to tell him that I was taking the toilet paper to the grave of Howard Hughes to think, but I don’t feel like I was dishonest. I was confused myself, on account of the missing pandas, and the guard and I were both just doing the best we could with the information we had in front of us. Everything would probably be fine. Standing down, he watched me walk deeper into the grounds. Straight toward Howard.

I do not know much about Howard Hughes, save for his characterizations in pop culture as an unhinged recluse, and I am not sure why I was drawn to him on this occasion. Each time I visited his grave in the past I had found it suitable to my understanding of the man. The monument is in some ways ornate, yet relatively anonymous and entirely unapproachable. It never did much for me. This visit was a total Hail Mary. 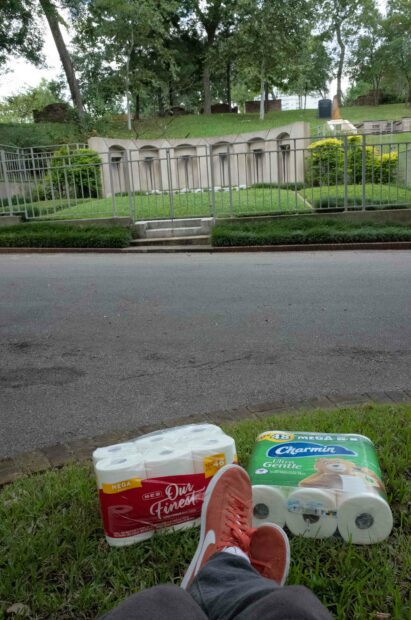 I sat across from the tomb and put the toilet paper on the ground in front of me. For a while, nothing happened. Eventually the ghost of Howard Hughes wafted in, looking neither like Leonardo DiCaprio nor like a man with very long fingernails. In fact, he didn’t look like anything at all, and instead was represented entirely by the empty distance between my two packages of TP. “Mister Hughes,” I began with a shiver, for I assumed this was the appropriate way to address a ghost, “the pandas are gone. What am I supposed to do now?”

“You missed something,” said Howard, sounding very much like the gap between packages of competing brands of toilet paper. (That is, he was entirely silent.)

But he just repeated himself. “You missed something.” Ghosts like riddles. I do not, not always.

“What in the world do you mean, you miserable capitalist spirit?” I was angry and wanted answers. “Be direct! I walked all the way here to see you. I’m scared, because I think I’m never going to see my pandas again. What the hell will I write about for Glasstire now?”

Upon consideration it was clear he was correct, he didn’t exist. I was conflating ghosts — worrying so much over the fate of my pandas, I wound up unloading on a dead industrialist who had nothing to do with anything. It happens, and in this case said industrialist was also imaginary. I sunk into introspection and gathered all the toilet paper up in my arms. Then, stillness. Texas sunshine cast down on me and my tissue, all pretty through the cemetery leaves. I felt a deep warmth, and I knew that the absence of pandas would not break me. Other funny things would appear for me to write about. Through the trees, in the distance, I noticed the security guard watching me from his truck.

That’s when I realized what I had missed. 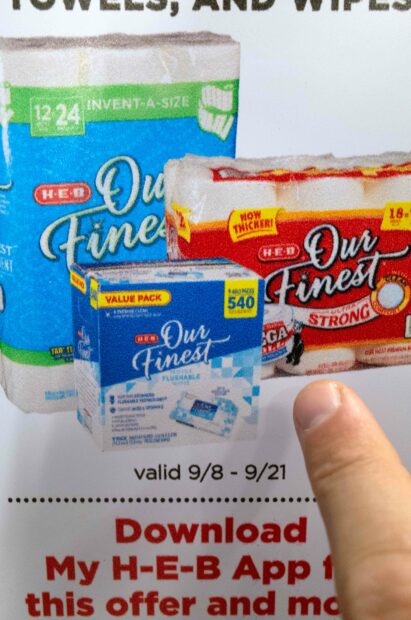 I Think I Miss HEB

Exposure Therapy 1: SPE Was In A Mall