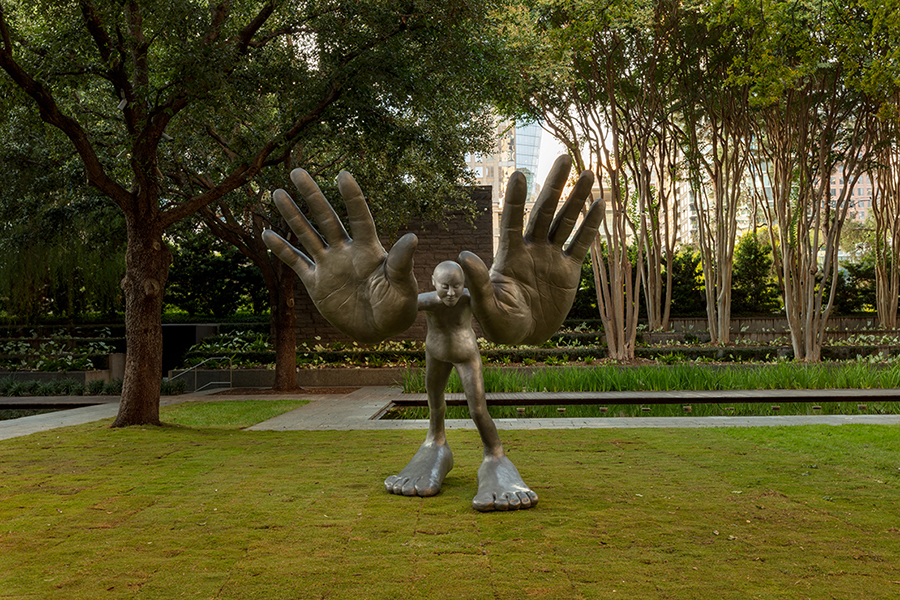 The Nasher Sculpture Center in Dallas has announced the acquisition of Nic Nicosia’s bighands, a new figurative, stainless steel sculpture from the Dallas-based artist.

Nicosia’s bighands, commissioned by the Nasher and currently on view in its sculpture garden, was acquired through support from patrons and admirers of the artist’s work. It is the only large-scale sculpture by the artist in any museum collection.

“It has been tremendous to witness the support for Nic and his ambitious foray into large-scale sculpture by the patrons and friends who came together to help bring this work to fruition,” says Nasher Director Jeremy Strick. “bighands promises to bring delight to our Nasher visitors, while compelling a thoughtful inquiry into the powerful language of bodily gestures.” 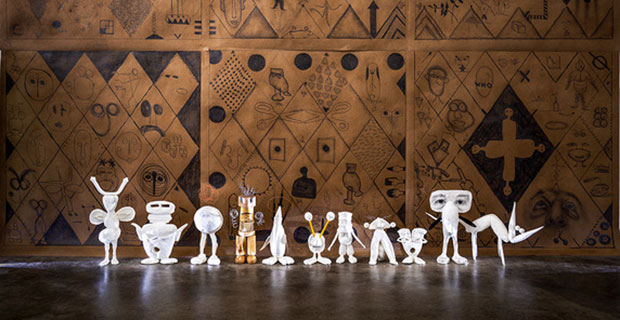 Nicosia’s work, seen in his most recent solo exhibition at Erin Cluley Gallery in Dallas, historically features photography and film, and in recent years, more independent sculptures and constructed sets, as well as drawing and more.

The artist’s early experimental nods to Max Ernst and Alexander Calder, with the use of paper, clay, wire portraits and hydrocal, were made outside of his photographic body of work, but have increasingly crept in to his staged photographs and real domestic interiors.

The Nasher acquisition bighands (2010, and enlarged and cast in 2020) is a foundry-produced work — one of a few pieces Nicosia has cast in his foundry collaborations.

“The figure is bald with no distinguishing facial features, male, but with no genitalia. Over 8 feet tall, the figure’s hands and feet are oversized. These disproportionate features effect a jarring shift in scale that is at once humorous and confrontational. The gesture, enlarged as it is, is nonetheless ambiguous. With one foot slightly in front of the other, the figure could be making an emphatic call to halt, pushing back against something, or simply presenting his hands—the body part that distinguishes humans as a species and individually — as an existential gesture: I am here; this is me. The hands on the model are Nicosia’s, making it an unusual and powerful self-portrait.”

bighands joins the Nasher’s other works from Texas artists including David Bates, Jim Love, James Magee, and David McManaway. The new acquisition is also in conversation with other figurative sculptures in the Nasher’s collection, including figures by Magdalena Abakanowicz, Jonathan Borofsky, and Antony Gormley, as well as with the shifts in scale and existentialist tone in the work of Alberto Giacometti.

For more on the Nasher Sculpture Center, please visit their website here.