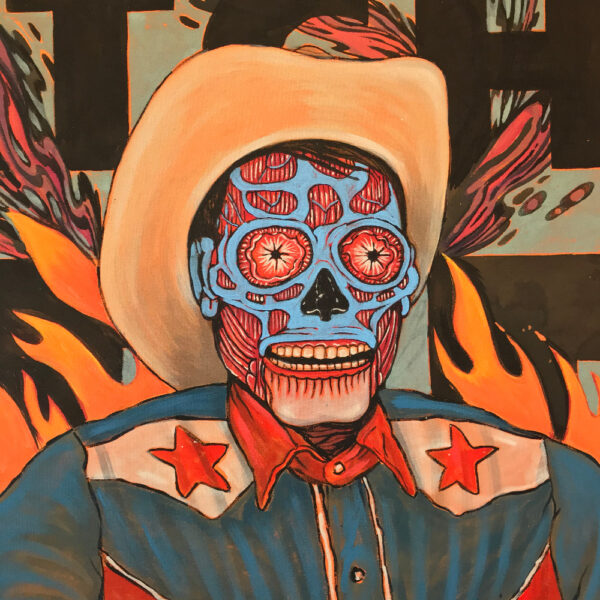 On a recent afternoon, a lovely autumn day in Dallas, as I made my way toward Ro2 Art’s main space in the Cedars, the roar of traffic along I-75 was interrupted by a sluggish calvacade of Trump enthusiasts. From NorthPark Center to the on-ramp for Woodall Rogers Freeway, polyester flags promoted patriotism and urged re-election next month for the sitting President. As they filed patiently toward downtown, I diverged from the traffic and snuck into the edge of South Dallas to view a couple of exhibitions, each with their own depictions of American symbols that strain to be “Great Again.”

The motif of the burning Big Tex has been constant in Brian K. Jones’ oeuvre since the monolithic mascot of the State Fair of Texas very publicly burned down to his wires in 2012. Jones has developed the work from literally dozens of angles; Glasstire readers will be familiar with his paintings and drawings of the cowboy, which stand alone, are offered as a coloring book pages, and are compiled into a seamless animation encircling the tragic effigy. 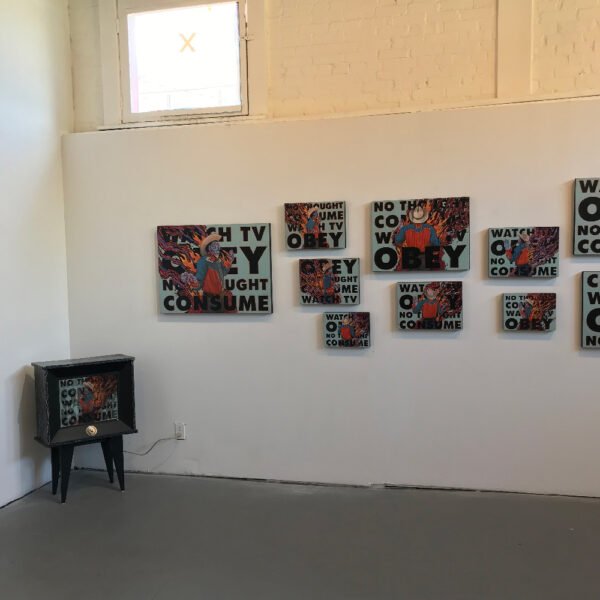 In this exhibition, Big Tex is now one of the alien overlords from John Carpenter’s movie They Live (1988), while the smoke and ash choke out the words “OBEY. NO THOUGHT. CONSUME. WATCH TV” in block letters. If you’re wondering about the significance of this iconography, Slavoj Žižek gives an entertaining explanation at the very beginning of his infamous three-hour performance lecture The Pervert’s Guide to Ideology (2012). Spoilers: They Live is a top-down metaphor for unmitigated agency in a consumer-driven market.

Big Tex is an abstract everyman who somehow manages to be nobody. As a fictional archetype, his presence is always assumed at the next State Fair, beaming and waving for one month of fatty confections and bumper-car fights while the weather cools down. To see his vacant smile and titan-sized Dickies scorched to their frame must have felt like an omen for those who attended the Fair that day. Jones is an expert character designer and illustrative painter; it was inevitable that he would find the fiction in true events that are larger than life. 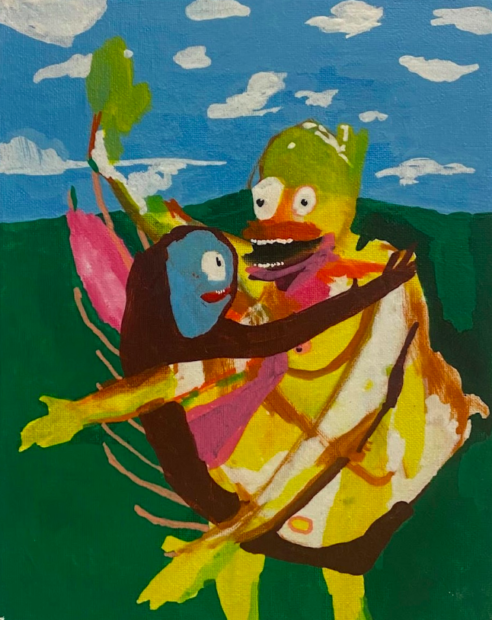 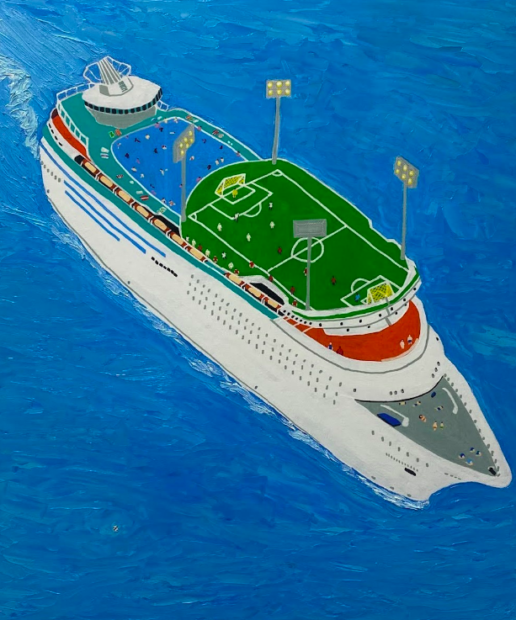 A massive cruise ship can be seen from a birds-eye view. When I see these sky-scraper sights in a film, the diegetic nature of the movie breaks, and I can’t shake myself back into suspended disbelief. We’re supposed to think about what’s being presented to us, not “The helicopter rental for this shot must have been expensive.” This particular cruise ship has a massive soccer field emblazoned by stadium lights, an impractical addition to an already audacious vehicle. I could be wrong — I’ve never set foot onto one of these polluting titans. Maybe I never will. The mall-on-the-sea behemoths aren’t safe from extinction; the majority of cruise attendees are over 50, and the capital-intensive cruise business may not have the agility to adapt to the onslaught of issues the pandemic has thrown onto their decks. Leisure and the pursuit of happiness won’t return to the usual trajectory even after the first vaccine innoculates willing vacationers.

Both exhibitions are on view at Ro2 Art, Dallas (Cedars location), through October 17, 2020.

Cleaving the Void in Jeanne Neal’s “Re-Articulation” at...