Does it feel like technology has moved too fast? In the global Coronavirus pandemic of 2020, the Silicon Valley motto ‘move fast and break things’ has done little more than deliver us a video conferencing service to replace Skype. Regardless, for her solo show titled Likes Charge at Women & Their Work in Austin, Melanie Clemmons presents a digital practice for casting a magic circle for protection and calm — a use of projections and cameras that is less speedy and more soothing.

As a digital artist, Clemmons is suited to show work under the current constraints of the pandemic. The show is installed at Women & Their Work’s Lavaca Street location in Austin, where four video projections, elemental in their presence, map the cardinal directions. The magical alignment is viewable from a rotating camera, which is live-streaming on twitch.

As compared to the video-conference format of Zoom receptions held in previous months, Clemmons’ reception on Gather.town recalled the playable chat rooms of the past, with customizable avatar sprites walking around in a top-down town hall, with spare furnishings painted directly onto the background. The online reception served as a crude rendering of the physical exhibition, with stills from the show placed on the floor in a radial arrangement. Webcam feeds of the participants can be seen and heard when two avatars walk within close range of one another. 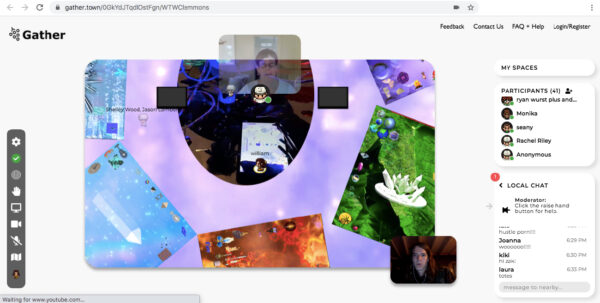 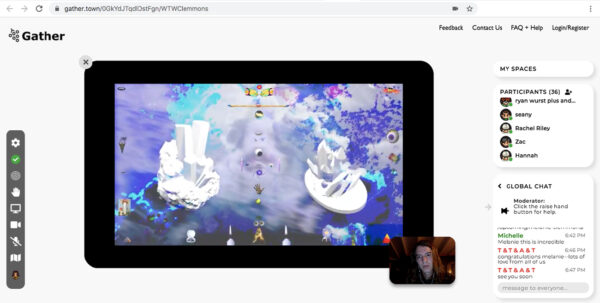 “All throughout this pandemic, I’ve been playing video games,” says curator Ariel R. Jackson during the Zoom opening reception for the Houston artist-run space Moonmist, for the group exhibition Inner Out, now viewable at Moonmist.space. Jackson led the audience, huddled around their laptops with drink in hand, through the virtual rendering of the backyard exhibition space in Houston that, now, can be ‘played’ from the comfort of a web browser.

Jackson says that the works in the show pertain to navigation and subjectivity, and some of the artists reference diasporic lines of movement in their work, as well as lived experience. She mentions that Alex Goss, organizer of Moonmist, approached Jackson with the know-how to construct the virtual space, while Jackson handled the curatorial effort. The necessity of the show’s virtual presentation is twofold: the ongoing pandemic is a major obstacle; but also, Alex Goss now lives in Virginia.

At the center of the digital back yard stands a large tree, with dozens of plastic containers dangling at the end of its branches. The artist Jeffrey Meris cites plastic as a material that is experienced differently depending on one’s class position. He offers that his own relationship to plastic, seeing it as a single-use material, changed after he relocated to New York.

“I think of waste as being an architectural issue. Waste is just as architectural as buildings,” Meris stated during the virtual opening. Our relationship to plastic objects, first as containers and later as pieces of rigid skin floating directionlessly in the ocean, is something the artist demonstrates as an increasingly literal diagram of our future under current global trends. 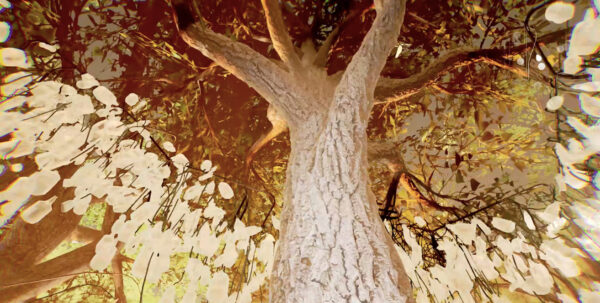 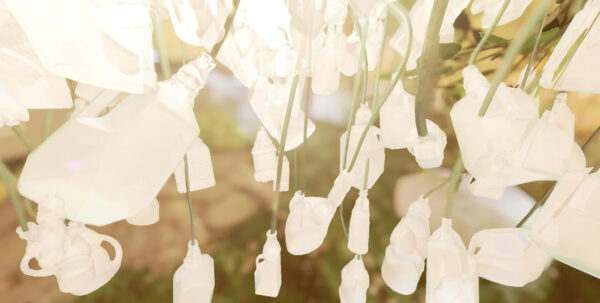