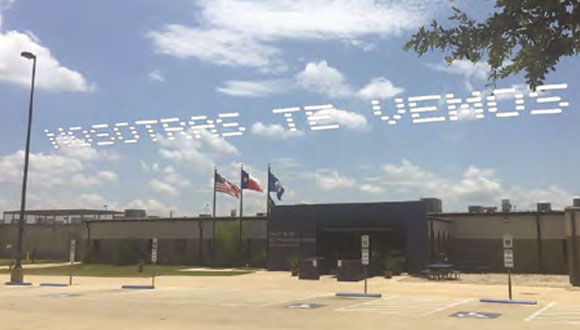 A  public art intervention performance organized by the El Paso Equal Voice Network (EVN) will happen today, July 4, across the United States. The performance incorporates “sky typing” or “sky writing” — airplanes make the water vapor condensation trails or ‘contrails’ to spell out words to relay messages — in this case designed by artists to be written in the skies near migrants detention centers across the country.

The initiative, In Plain Sight, is led by artists Cassils and Rafa Esparza, and one of the locations is the El Paso/Ciudad Juarez area. Described as “a highly orchestrated media spectacle and poetic act,” In Plain Sight is a collaboration of 80 artists creating “an artwork to abolish migrant detention and the culture of incarceration.” The sites, 80 in all, include detention facilities, immigration courts, borders, sites of former internment camps, and other historically significant landmarks. 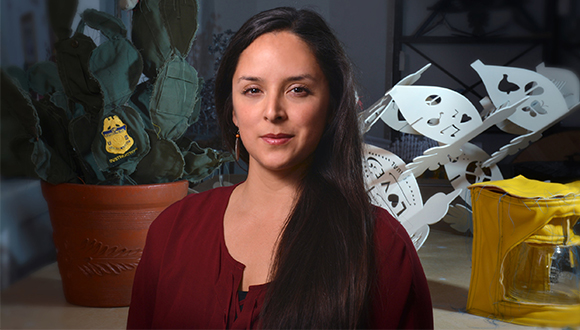 Each artist’s message will end in the hashtag #XMAP, which leads to In Plain Sight’s website and interactive map. The website uses geolocation technologies to locate ICE detention facilities within the  message display areas. The goal of this sky typing performance is to make visible what is too often unseen and unspoken on the ground: the appalling and profoundly immoral imprisonment of immigrants.

The El Paso message, which reads “UPLIFT: NI UNX MAS,” will be written in the sky over U.S. Customs and Border Protection at the Bridge of the Americas (El Paso CBOA) Port of Entry, located at 3600 E Paisano Dr, El Paso.

According to the El Paso Equal Voice Network, the message “is meant to inspire awareness in our binational  community and a call to action for all to stand against Immigrant Detention Centers, and systematic racial violence impacting our immigrant and indigenous communities on both sides of the US/MX  border region.”

NI UNX MAS is inspired by the 1995 phrase by Mexican poet and activist Susana Chávez, “Ni una muerta más” (Spanish for “Not one more [woman] dead”), in protest to the female homicides in Ciudad Juárez. Susana Chávez herself was assassinated in 2011, a moment in which the phrase became a “symbol of struggle”. The inclusion of the “X” by the artists refers to the call of action against killing of all females and males, indigenous, LGBQT, people of color, and all immigrants incarcerated — victims of systematic violence in our border region.

Researched In Plain Sight website then came across glasstire.com – thanks for the artists cartoons re how people are handling the virus
Oorooo
Elfie