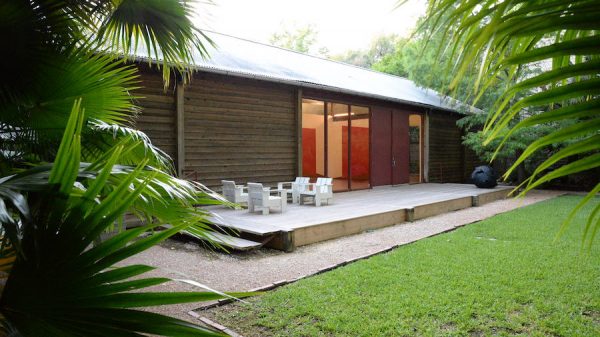 Creative individuals will continue to make marvelous things during lockdown, yet for the first eight weeks the visible results too often felt sad and dispiriting. Art fairs and galleries deluged art lovers’ email in-boxes with online viewing rooms. For every notable one — Carol Bove building a huge sculpture posted by Zwirner, Mary Weatherford’s Japan drawings, Josh Smith’s hanging what should have been his new show on the roof of his studio building — there have been dozens of “special” presentations that made me wonder if the definition of the word “special” had been downgraded to meaning “unsold inventory.”

Beloved cultural institutions tried the already hackneyed audience-engagement technique of giving artists their Instagram passwords to “take over” the account. Even when the artist was a potentially provocative choice, the results were rarely anything but snooze-worthy. It’s not like anyone needs an excuse to stare at Instagram more. Wading through famous artists portraits of their studio cats and smiling fabricators was more than I could stand even as I fully sympathized with the institutions addictions to “likes” in a hopeless attempt to keep their traumatized public entertained.

Then a new variety of post-COVID art experience was offered, the drive-by exhibition — artists designing shows to be seen through gallery windows, best experienced in evening hours. The first iterations I saw came from Los Angeles, and even as a timid driver I was drawn into the idea. Many of my favorite celebrity Angelenos participated, like Vanessa Prager, Scott Benzel, Andrew Holmquist, Katja Farin, Thomas Lawson, Jason Meadows, Dave Muller, Kori Newkirk, Jennifer West, Jackie Rines, Charles Arnoldi, Todd Gray, Evan Holloway, Kenny Scharf, and Jason Yates. Los Angeles traffic be damned, I would happily crank the Lizzo and tour congested Los Angeles for this.

This seemed a very good idea for Houston too, but the question arises: Why is viewing art through glass windows better than on a screen? And since plane travel still seems an unnecessary risk, I admired the Los Angeles project on my own Apple screens, while being grateful that in theory it would get me away from my computer screen. I wanted this experience, but thinking of the Houston galleries I pay closest attention to, none had the right configuration for safe “staying in the car” viewing. What was to be done? 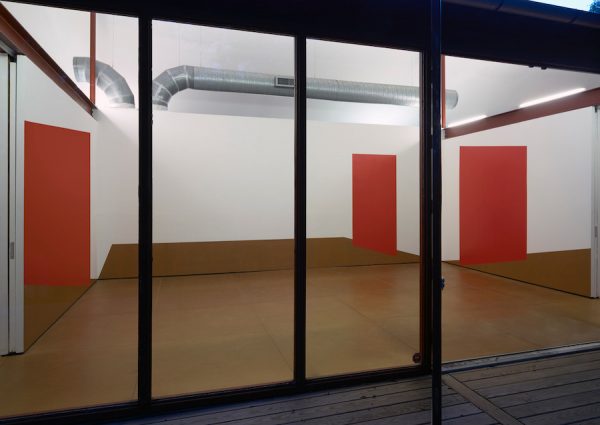 Then the folks at Hiram Butler gallery came to the rescue, making a modified version of a drive-by exhibition. The brilliantly playful formalist painter Kate Shepherd, rather than rescheduling her planned show at the gallery, took advantage of gallery director and artist Josh Pazda’s willingness to make magic with her. She designed a show for Butler’s elegant space that would take advantage of its copious windows and seductive sight lines. Most Houston art lovers cherish the garden area of Hiram Butler’s gallery as a wonderful respite from the urban sprawl of Washington Avenue. Back in the days when shows had openings, one of the best cultural hangout locations in the city was Butler’s morning opening soirées.

Windows have a tortured, fickle relationship to ideal gallery viewing conditions. Even without considering the deleterious effects of damaging sunlight on fragile art, windows are often perceived as useless interruptions smack dab in the middle of walls that reduce precious hanging area. Many a gallery has built floating walls in front of their windows, no matter how nice the views had been. Airless art bunkers are the norm, not the exception. 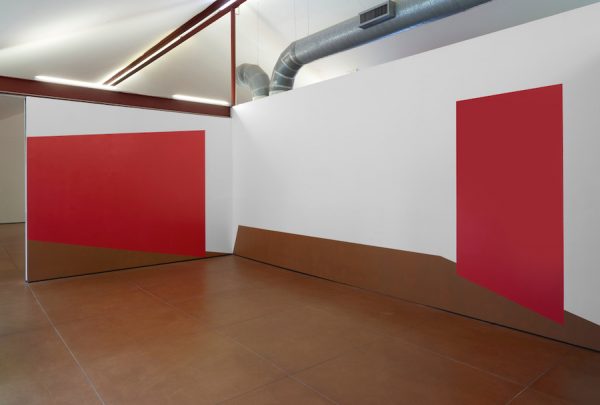 Yet windows can make a show look so much more beautiful, and galleries in Houston like Jonathan Hopson here, are known for the beauty of their windows. One reason shows at Hiram Butler are so seductive is the effect of natural light on our senses and souls when enjoying the glorious unnaturalness that typifies visual art. And the inclusion of actual nature in the garden area one crosses between the parking and the art is special to this venue. 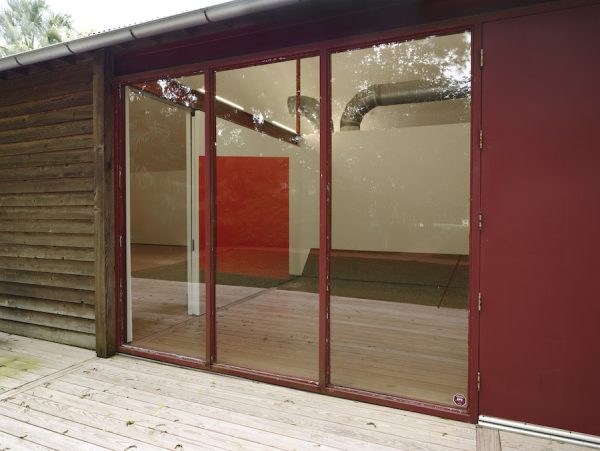 Shepherd’s video introduction to the show, viewable on the gallery’s Vimeo page, explains her thinking about this version of showing her work to a public without objects or her physical presence in the city. The shows’s lengthy title is April, May, June, etc., etc., Upended Floor (Mud, Blood). Its triple references are pure poetry. “April, May, June” notes the anxious-making fact that no one knows how long the health crisis will keep us away from each other. The second clause, “upended floor” contextualizes the piece within her investigations of architectures and the aesthetics of architectural renderings. 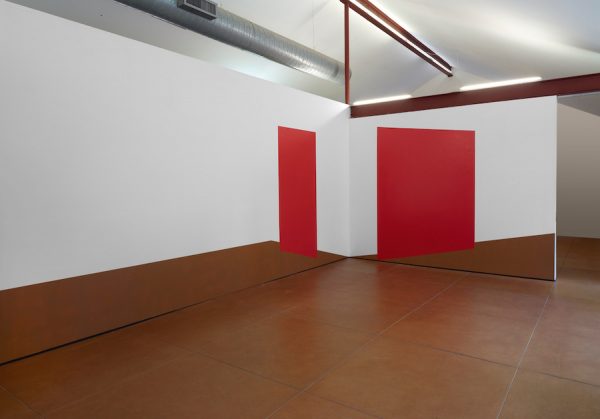 The title’s final clause, “Mud Blood,” takes the artist’s playful relationship to color and deepens its metaphoric intensity, to the most elemental of realities — we bleed and our corpses return to earth; think Whitman meets Beckett. Visual pleasure in Shepherd’s work is often a way of opening our hearts and minds. Shepherd is well-known as one of the most effective colorists of her generation, and her subtle hues usually read like a poem, but for this show she went primal. The video even lists the Benjamin Moore color codes. (1120 and 1315 if you want to bring these colors into your own living room.)

The gallery’s insistently brown floor, under the artist’s direction, starts riding up the walls in a fabulous stage-set like illusion. Shepherd “hangs” some bright red shapes that could be the types of paintings she is most celebrated for but that also seem like magical stage doors with characters hidden behind, ready to make a stage entrance. The artist’s icily perfect technique with enamel paint has led recently to her exploring the reflectivity of her surfaces, and events like windows on nearby walls, or other viewers’ shadowy outlines, will create transient painterly events within monochrome fields.

Her New York show at Lelong opened the first day of lockdown, and the video document demonstrates her dialog with changing light and visitors bodies frozen in time as the gallery, by necessity, locked its doors for the run of the project. Titled Surveillance, the topic on her mind in 2020 is how we see and are seen, and controlling the visitors’ view points was seen as a plus, not a minus.

Still, Shepherd needed to reconsider her preferred materials for the Hiram Butler project. The enamel paint she uses on her gallery objects must be painted flat on a table or the floor, since enamel would drip into a gooey mess when applied as a vertical wall painting. The “inside view” is radically more matte than most of Shepherd’s works. Arriving during gallery hours (appointment required) to get the inside view allows you to see a vitrine of marvelous unframed “drawings” for the piece. Made before, during, and after the design of the wall work, you can witness the way she dreamt of the overall forms it resembles when seen through the window, and the meta shapes the brown mass creates. 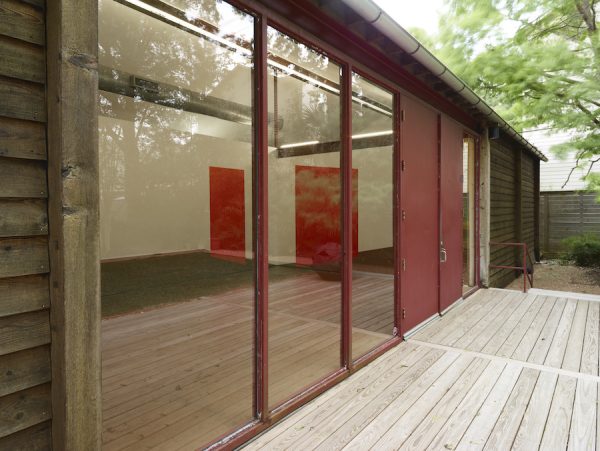 While most visitors come at dusk, as an early riser I opted for the sunrise experience. After I adapted to the unusual feeling of entering a gallery courtyard five hours before anyone else would arrive, I soon loved standing outside with a coffee in hand. The drama of gazing into the bright interior mellowed quickly as the sun rose above the trees. Given the timescale of a sunrise, I entered a semi-meditative head space, finally sitting in the dawn chill of a Texas garden, staying much longer than I would for a normal exhibition visit during more normal times. Each aspect the work was revealed as pure visual poetry. Unanticipated by the artist but dreamily perfect was the way Houston humidity caused an overabundance of condensation to distort Shepherd’s strict geometries, making an already magical moment scene more woozily dreamy.

When I touched base with the artist about her project the world had changed again, as the possibility of making progress against white supremacy and racism through protest and political action became as crucial a reality as surviving the pandemic. We recalled a discussion we had had a decade ago about the Bauhausian ideal that training the senses through considering form and color was intrinsic to training the heart and mind to make better ethical choices. She texted me this observation later on the day I started before her glorious windows:

“Can you believe that a life-threatening virus has been ‘trumped’ by a more longstanding tragic reality. We are double fisted now— not with two whiskeys but with fear and rage. The colors embrace fundamental aspects and causes of where we are now. Blood: we are human, all of us, we share this on the inside. We all have to protest together. The color brown, where we are from: the earth — ideally what we share, and yet was stolen from those who originally owned it. The ground is where we come from, our shared foundation.” 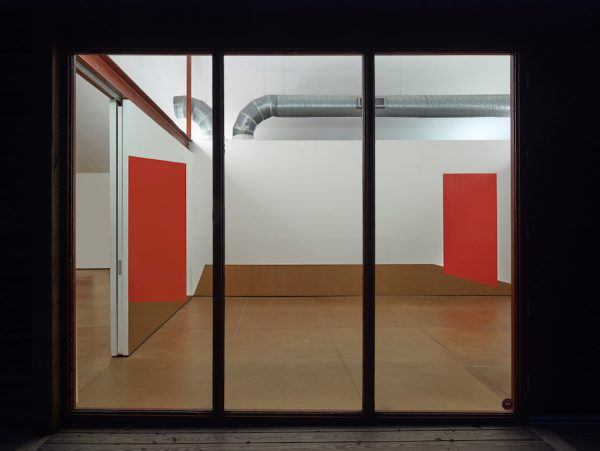 Art as overwhelmingly luscious and well-conceived as Shepherd’s April, May, June, etc., etc., Upended Floor (Mud, Blood), embracing the fleetingness and finiteness of life, gives a perspectival gift to any willing viewer — especially needed during times of crisis, change and renewed hopefulness.

On view through the windows (and by appointment) at Hiram Butler Gallery, Houston. Recommended viewing time: 8 p.m., Tuesday – Saturday.