Read All About It: Art Guys and Menil Given a UK-Style Thrashing in HuffPost, UK Way Back in 2011! 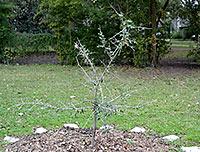 In case you missed it, (as I did!) a piece titled “Homophobia and the Arts” co-written by blogger James Payne and artist Michael Petry appeared in the Huffington Post, UK in late December, 2011. In the strongly-worded piece, Payne and Petry mention misleading signage downplaying Rauschenberg’s same-sex relationships at several exhibitions as an example of “practices within the art world that keep openness at bay,” but the bulk of their ire is aimed at “The Art Guys Marry a Plant” and the Menil’s acceptance of the piece, which was removed last weekend from the site it has occupied since 2011.

Check out my comments on that article and see if you think Rainey’s and others’ characterizations of my criticism of The Art Guys and the tree piece as “homophobic and anti-gay marriage.” Here’s a typical example:

I agree with your basic point, James, and no one’s been a more public critic of The Art Guys’ piece and the Menil Collection’s acceptance of it than I. As an artist and critic myself, though, nothing trumps artistic freedom for me (and no scare quotes are needed). The Art Guys’ piece fails on the merits, not because it’s anti-gay — in fact, I would have had more respect for an honestly homophobic work that had something real going for it than their piece — but by the standards of social sculpture, their chosen medium. You can’t make a successful social sculpture that’s willfully oblivious to the social context in which it occurs, and you can’t claim to blur the boundary between art and life while doing the opposite (The Art Guys remained married to their wives and ultimately outsourced the tree’s “care” to the Menil, which ignored warnings that vandalism was easily possible and likely).

It’s worth distinguishing between heterosexism and homophobia; pointing out the former without accusing its practitioners of the latter may help them realize that merely voting the right way on a given issue isn’t enough. Of course, that requires their being willing to truly listen and engage in open, honest dialogue, something The Art Guys — and certainly not the Menil — haven’t done so far. Now that you’re giving this international attention, maybe the Menil will.

Such shocking, uncivil discourse! Elsewhere in the comments, I criticized the author for not contacting the Art Guys and the Menil for comment.

OK.
Enough with the self-aggrandizing meta-talk about a piece that has nothing to do with you.

Ordinarily, I’d never personally address a commenter, but since your name appears as the “latest comments” on now both of the posts dedicated to this fiasco I feel compelled to put a stick in your spokes.
You’ve made this your personal cross to bear, and for what? Do you have stakes in the Menil’s collection or something?
Got it out for Rainey or The Art Guys? You have made this singular piece of artwork your axe to grind–and for what?

Whatever your reasoning, your verbal diarrhea is based on nothing rational, aesthetic, critically engaging or theoretically pertinent. Nothing you say contributes to a thoughtful dialogue on the subject. You jump in, say “I said, I said, I said” and fail to convince me-as a reader-to consider your opinion as valid on this specific topic.

Here, you suggest I “check out your comments on the article” and I find that you’ve amended your original to this post. You site yourself while betting that one won’t see the additions you’ve made now to OLD comments on an OLD article. Obviously, you found your point lacking and felt compelled to freshen it up.

Either you’ve got balls or you’re just ignorant. You ridicule a reactionary piece of performance on the grounds of it’s “social context” based on your standards of “social sculpture”–whatever the fuck that is–and find it lacking. Have you taken a course on 20th century art? Have you read a book? Why am I wasting my time asking these questions?

An artist’s work is shaped by the society in which it is created. Very rarely does a work of art immediately shape the society for which it was created. This is such the case. The society you are fighting is not represented in a single act, a single piece of performance art or it’s residue. Now you are dragging everyone by the nose through your path to a truth everyone knows exists beyond a stupid tree at a fucking museum.

Having researched you before posting this flaming diatribe, I know that nothing you’ve done artistically or critically has meaningfully contributed to art history’s discourse one shit.

I don’t know you Devon Britt-Darby, and I hope to never meet you. Until you have something of substance to contribute keep your own small-minded, bad writing, ugly high-school-mirror-self-shots and sham weddings to yourself. You’re a joke.

So much bile for someone you don’t know, so little to back it up. But it’s telling — and typical of the factphobic Art Guys apologists here on Glassbubble — that in a post chock full of insults your only factual assertion is demonstrably false.

I did not make any additions to “OLD comments on an OLD article.” I copied and pasted one of the comments verbatim — the one dated “13:15 on 21/12/2011.” Didn’t add a single word. I did remove a link to one of my blog posts, which actually made the post you’re complaining about less meta. There’s no pleasing some people.

To answer your questions, my stake in the Menil is that I want it to live up to its standards and its legacy, not cheapen them by trying to sneak badly conceived artworks into a collection that rightly turned them down less than two years earlier. And when it makes controversial accessions, whether I agree with them or not, I want it to sponsor public discussions about them, not try to ride out the controversy or sweep it under the rug.

And no, I don’t have it out for Rainey or The Art Guys, but I have a huge problem with a nonprofit art journalism website using its resources to smear another non profit, which is what they’re doing to the Menil by accusing it of deaccessioning.

I’m just a guy whose comments you don’t have to read; you should be asking Rainey what HER axe to grind is. The whole reason we’ve been having this debate all week is because of the false reports on her website that she still won’t correct.