Mimi Swartz of Texas Monthly has been busy since Friday, when Glasstire published the Art Guys’ announcement that their controversial piece, The Art Guys Marry a Plant, was to be removed from the Menil Collection’s lawn, where it has been planted since 2011.

On Friday, Swartz was CC’d  a scathing email from artist James Surls to Menil board member Marilyn Oshman, which Swartz reprinted, after confirming it was intended for public consumption:

I write this to you because you are only board member of the Menil I know personally. I have to say I am amazed at the sheer “Gutlessness” of the Museum World, the only way I can look at this is as follows: Hiram Butler has won, he has simply beat the Menil to a whimpering  pulp. Hiram Butler – 1, the Menil and all artists – 0. This is sad on so many levels that I can not even begin to state them all, but even if the piece of art was really bad, who the shit is Hiram Butler to say what will or will not be in the collection of any given museum.

I am truly ashamed of the Menil for letting a small-minded unintellectual, and yes even evil, art dealer “Lord over” one of what was one of the great museums. Ms. Menil would just die all over again if she knew of this Gutless Act by her beloved museum.  History will not be kind to this moment of coward-ness on the part of your director. Even if the board said yes to this, he should resign before letting an art dealer rule a museum’s actions. I am truly ashamed for a place that I always had the greatest respect for.

Like any art museum, the Menil Collection reserves the right to relocate works on display or to remove works from display.  After damage occurred to the part of the work that is a living tree, the Menil felt it necessary to move The Art Guys Marry a Plant and discussed this proposal with the artists, who stated that they would instead prefer for the work to be put into their possession. The Menil has honored this request.

The Menil seeks to engage in a vigorous conversation about contemporary works of art and their subjects.  We exhibit sometimes controversial works and organize public discussions of the issues they raise, including same-sex love and gender identity. In this regard, we are proud to be presenting the current exhibition The Progress of Love and the forthcoming exhibition Forrest Bess.” 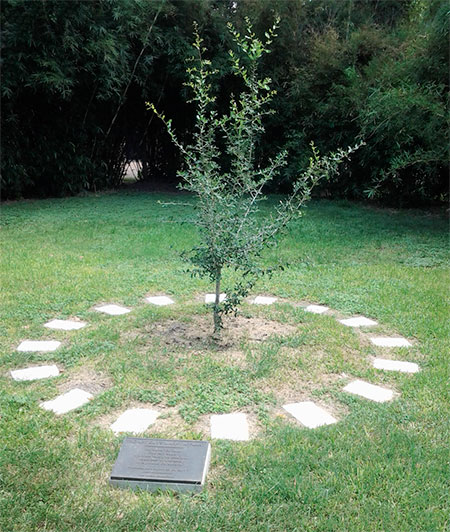 Does this mean we all jumped the gun?

Don’t feel bad. You only jumped the gun because The Art Guys and Rainey lied, claiming the tree had been removed from the collection when it had only been removed from the Menil campus. What better way to provoke a backlash against the museum that would last several days? Rainey still hasn’t corrected the first paragraph of her “On Institutional Cowardice” article. She owes her readers and donors an apology.

I stand behind the spirit and the letter of my article.

Of course you stand by the spirit, which was that of a scorched-earth campaign by a couple of artists who can’t stand the thought of their work not being on permanent display. The Menil thinks displaying the tree was causing fundraising problems? You’ll give them fundraising problems!

But the only way you can stand by the letter is to dispute Josef Helfenstein’s claim that the Menil still owns the artwork. Even Molly Glentzer’s fawning profile in the Chronicle notes that the piece wasn’t deaccessioned. Moving an artwork off-site is not the same thing as removing it from the collection, and you know it.

You raise money every year from people who give in good faith because they want honest art journalism in Texas. Either you’re taking their money and using it to spread misinformation, or Josef is lying when he says the Menil didn’t deaccession. Which is it?

Although there have been artists in the past whos artwork has been provocative and disruptive to the public, and their artwork still stands at the menil museum walls, …This particular artwork, the tree specifically seems to be provocative and disruptive to the menil institution. The tree affects the museum, their grounds are being disturbed, and their mission is being compromised because of that. Why should the museum have to deal with such a situation? They are correct in removing the tree. After all, they are the owners of the work and they can burn it if they want to… Removing it from display is the least they could do. I read that they are returning it to the art guys…..(That is because it does not have any $$$ value.)

On a personal note, I feel as though this artwork is of inferior quality to other “provocative” work and perhaps it does not belong in the museum setting.

On a further note, It is just a tree that has been blessed by a small group of goofballs. Why does that classify it as artwork. The artguys mentioned in a video of the event that the artwork was in the marriage… in the notion of artguys marrying a tree. Not in the tree itself. If the artguys marry a puppy, is the puppy going to be placed in the museum collection? I don’t think so.