by Neil Fauerso May 9, 2020
FacebookTwitterEmail

The Ransom Center at the University of Texas in Austin is a remarkable resource, housing the collections of luminary writers such as Harold Pinter and David Foster Wallace. Scholars, researchers, and lay people can view diaries, papers, and marginalia by appointment, and the main floor hosts rotating exhibits and the monumental sight of a Gutenberg Bible.

Installation view of the Márquez exhibition at the Harry Ransom Center, UT Austin

The current exhibit chronicling the life of Colombian Nobel Prize-winning author Gabriel García Márquez is far more than  a mere collection of his papers, notebooks, and photographs. It is an attempt at a holographic evocation of a man whose life and works are so spectacular that he became an archetype — a genre unto himself. 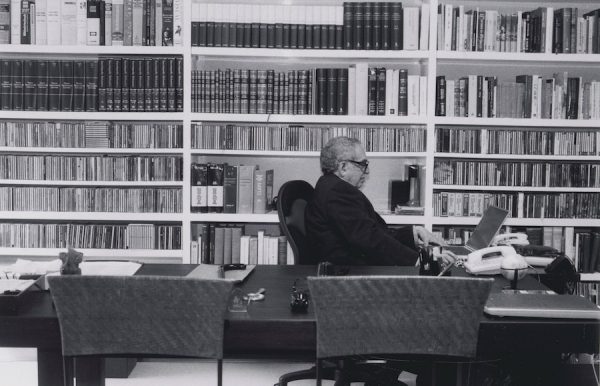 Márquez is perhaps the most famous practitioner of Latin American Magical Realism — an intoxicating mélange of bittersweet nostalgia, romance, surrealism, and social history. It has become a bit clichéd and watered down with an endless litany of cheap (often Americanized) imitations, but the real thing — including Márquez’s best works, 100 Years of Solitude and Love in the Time of Cholera — are enormously affecting, dream-like jewels of the human condition.

Márquez’s life has the glow of one of his own novels. He was raised by his grandparents (who would be a major inspiration for his works) in Aracataca, in the Caribbean region of Colombia, and the exhibit includes a sketch by Márquez of his childhood home. His grandmother told him tales of superstition, ghosts, and hauntings. Márquez’s imagination bloomed from an early age in this idyllic Caribbean setting. 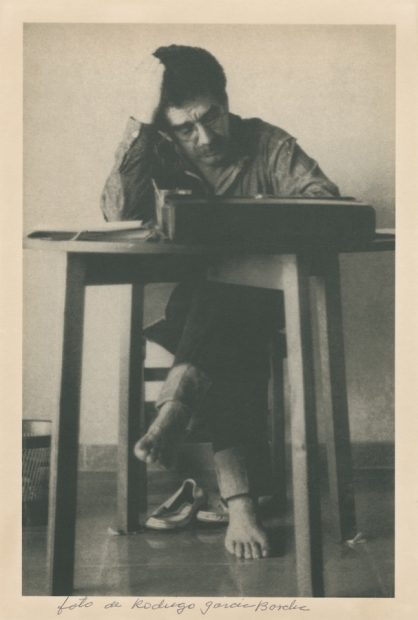 In the exhibition, Márquez’s early adult life, when he worked as a journalist and struggled to complete 100 Years of Solitude, is vividly narrated. With a leftist perspective, he did stints in Caracas and Mexico City reporting on the tumult of post-WWII Latin America. This part of the Ransom Center show is a fascinating addendum or corollary to a show around the corner at UT’s Blanton Museum of Art: The Avant-garde Networks of Amauta: Argentina, Mexico, and Peru in the 1920s chronicles a seminal Peruvian avant-garde art publication AMAUTA and the dazzling array of artists across Latin America incorporating surrealism, cubism, futurism, and other movements into their radically social, egalitarian, and thrilling creativity. This crackle coursed through the humidity of Márquez’s youth, and the imagery throughout the show — stridently politic, magical, tragic, and ineffably beautiful — are like the drifting spirits of Marquez’s novels decades before they were cast in print.

Installation view of the Márquez exhibition at the Harry Ransom Center, UT Austin. This was the opening of the show in February.

A large portion of the Ransom exhibit is devoted to 100 Years of Solitude, which is justified. Few artists create a work that is, in and of itself, a world-making epoch. 100 Years of Solitude’s epic story of a fictional Colombian city founded after a dream of a city of mirrors was immediately successful and became one of the most beloved novels of the 20th century. Many directors have sought to adapt it into a film without success. It defies a concrete visualization; its imagination unfurls endlessly like the current of the river on which the novel’s city of Macondo is founded. It is therefore fascinating to see the skeleton of such an awe-inspiring work in the form of drafts, notes, and marginalia. 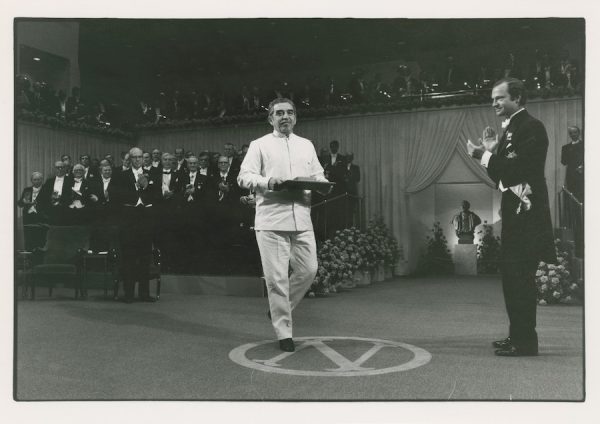 After the 100 Years of Solitude section, the exhibit flows into a reverie of global success. There are many excellent photos of Márquez socializing with other artists and world leaders in his characteristically casual swag. One delightful detail is a map of the world with pins in all the cities and countries from which he received telegrams of congratulations after winning the Nobel Prize for Literature in 1982. The exhibition does a holistic job of mapping the icon of Márquez, his ascent, celebrity, and ultimate reach.

Installation view of the Márquez exhibition at the Harry Ransom Center, UT Austin

There are unexpected touches throughout the show that elevate it beyond a didactic biography. One segment includes video of the great travel writer Paul Theroux discussing the influence of Márquez followed by clips of the underrated Peter Weir film The Mosquito Coast that Theroux wrote and for which he was indebted to Márquez. In the film, Harrison Ford plays a genius disgusted by modern life in America who moves his family to the Amazon and tries to build an ice factory — a noble, tragicomic, doomed endeavor. What crystalizes here is that Márquez’s life and work tapped into a universal vision of the human experience. It is on the same wavelength as Cervantes’ Don Quixote, the Alexander Girard Collection in the International Folk Art Museum, the films of Werner Herzog. It is the folly of the quest, the utopic vision, walking into the city of mirrors and seeing yourself reflected throughout eternity.

‘Gabriel García Márquez: The Making of a Global Writer’ at the Harry Ransom Center, UT Austin. Exhibition dates: Feb 1-Aug 30, 2020. The galleries are closed due to the Coronavirus outbreak, but you can visit online a sampling of the exhibition and the García Márquez digital archive.