FUTURAMA: “Visions of the Future” at the Ransom Center 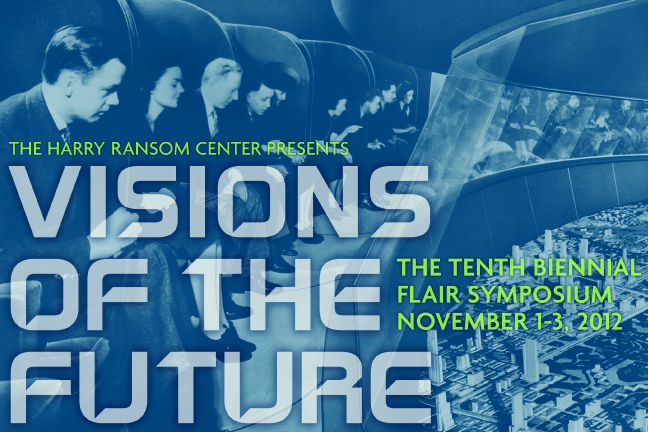 ATTENTION FUTURISTS:  Report to Austin, Texas on Thursday November 1 by 7:30 p.m. for author/futurist/design visionary Bruce Sterling‘s kick-off speech at this year’s Harry Ransom Center’s Flair Symposium, “Visions of the Future”.  This event is free and open to the public at Jessen Auditorium, across the plaza from the Ransom Center at 300 West 21st Street on the University of Texas campus.  Or catch it via webcast (Central Standard Time) at www.hrc.utexas.edu/webcast.

On Friday and Saturday November 2 and 3, acclaimed designers, architects, historians, curators, and visionaries from across the country will convene to “explore the ways the future has been imagined over time”.  The registration fee for these two days is $100, with a limited number of student tickets available for $35.  Don’t bank on walking up on the day of to buy a ticket–go to http://www.hrc.utexas.edu/flair/ for all the details.

Heavy hitter panelists include architect Greg Lynn, named by Time magazine as one of the 100 most innovative people in the world and who is, according to Forbes magazine, one of the ten most influential living architects; architect and historian Alan “Googie” Hess who has published 18 books on architecture and the planning of suburbia; Wendy Kaplan, Department Head and Curator of Decorative Arts and Design at the Los Angeles County Museum of Art who most recently co-organized the museum’s exhibition California Design, 1930–1965: “Living in a Modern Way” and edited and contributed to the exhibition catalog; and author John Crowley, a three-time winner of the World Fantasy Award and recipient of the Award for Literature of the American Academy and Institute of Arts and Letters.

Now in its 20th year, the Flair Symposium is held biennially and is named after the landmark magazine produced in 1950 for just twelve issues by the legendary Fleur Cowles.  Her groundbreaking magazine remains a benchmark in publishing for its lavish and vanguard design and its innovative and provocative mix of writers and artists.

The Ransom is the repository for Fleur Cowles’ personal archives that includes her work as a painter, writer and publisher.  She died in 2009 at the age of 101.  The Ransom is also the home of the Bruce Sterling archives.

Concurrent with this year’s symposium is the exhibition “I Have Seen the Future: Norman Bel Geddes Designs America” which draws heavily from the Bel Geddes archives housed at the Ransom.  (The Ransom holdings are nothing short of mind-boggling.) Donald Albrecht, curator of the exhibition, will moderate a panel at the symposium, “Marketing the Future”.  His companion book to the exhibition, published by Abrams, will be released November 1.  For more on this influential American designer and futurist go to http://www.hrc.utexas.edu/press/releases/2012/belgeddes.html.