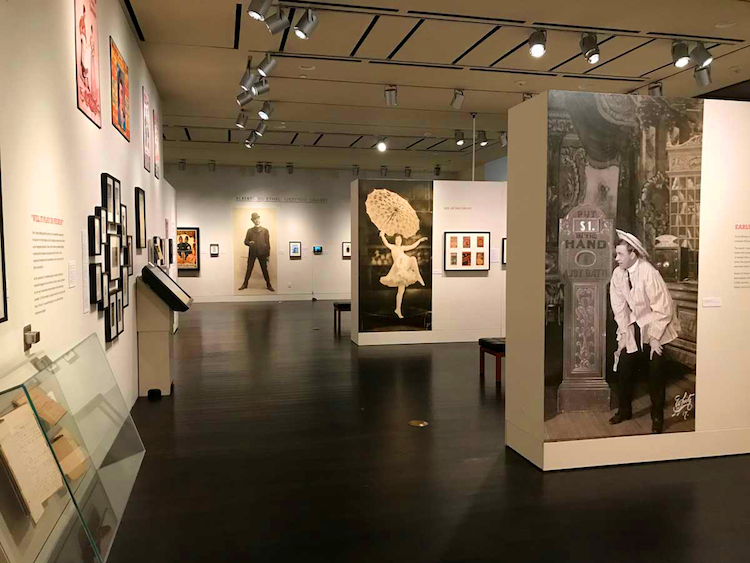 The ad in a 1911 issue of Billboard caught the eye of 14-year-old Vander Clyde* in Williamson County, Texas. Placed by the Alfaretta Sisters, “World Famous Aerial Queens,” the notice said the sisters were auditioning trapeze and high-wire performers in San Antonio. Inspired by attending circus performances, young Vander had been developing aerial skills on the family clothesline. Hired by the Alfarettas, he was costumed as a girl for dramatic appeal.

A dozen years later, performing as “Barbette,” the Texan had become a Parisian sensation. Reviewing Vander Clyde’s performance in Nouvelle Revue Française, Jean Cocteau found his illusory allure “extraordinary,” and in 1930 Barbette appeared in Cocteau’s first film, Le Sang d’un Poete (Blood of a Poet). A portrait of Barbette in watercolor and pencil by Cocteau is included in the richly textured exhibition Vaudeville! at the Harry Ransom Center at the University of Texas at Austin. 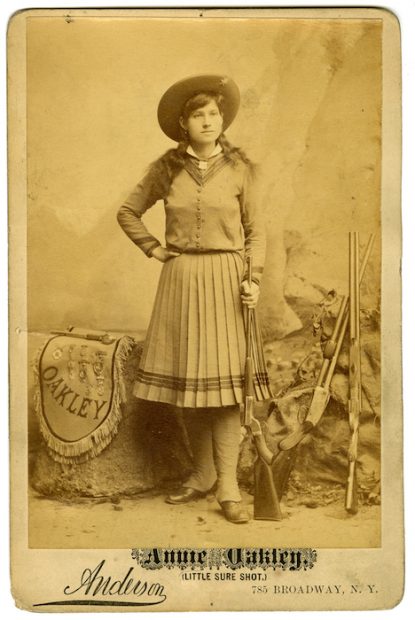 Some 200 vintage photographs, artifacts, and recordings from the Center’s expansive theater history collections bring into focus the amorphous, sprawling mega-genre of American entertainment called vaudeville. In addition to acrobatic and gender-bending acts like Barbette, the performance smorgasbord included comic bits and sketches, music, dancing, animal acts, ventriloquism, magic, early forms of moving pictures, and a crazy-quilt grab-bag of eccentric novelty acts. Will Rogers, represented in Vaudeville! by an image from his Ziegfeld Follies days, became a star by doing rope tricks and jawing about the news. Annie Oakley trick-shot her way from vaudeville stages to Buffalo Bill’s Wild West.

As noted in multiple sources, vaudeville’s beginnings are pegged at various times throughout the 19th century, and the all-inclusive medium continued into the 1930s. Vaudeville! explores the genre’s emergence from minstrelry, Punch and Judy, and other showbiz traditions. An 1846 broadside advertising the George C. Howard Family Company of thespians, kicked out of Providence, Rhode Island for opening a theater, recalls early America’s puritan streak that shunned the “professional liars” of performing arts. A facsimile of the 1822 oil painting, The Artist in His Museum, by the multi-tasking Charles Willson Peale, references the twin development of the theatrical arts and museums. 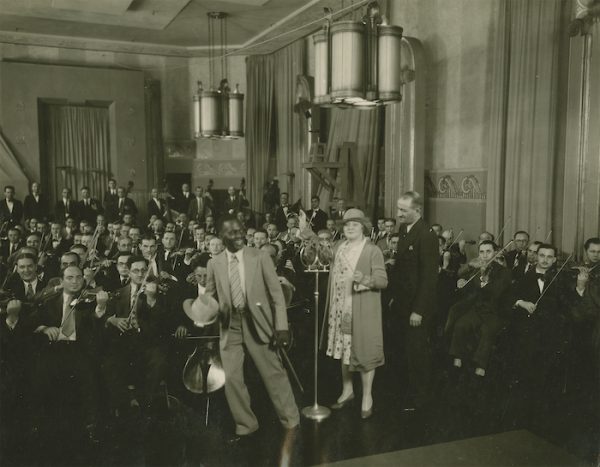 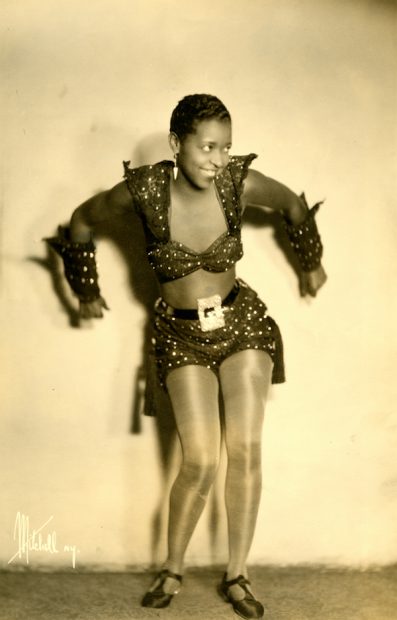 The always-complicated issue of race in America is no less complicated through the lens of vaudeville, where the default mechanism for dealing with otherness was caricature. The troubling history of blackface performance is starkly illustrated in Vaudeville! by a 1910 tin of Stein’s burnt cork make-up and an 1899 set of instructions on how to “black up.” An 1850 ink and gouache on paper shows the set-up for The Original Christy’s Minstrels, and an 1833 reproduction of Kentucky actor T. D. Rice’s Jim Crow performance illustrates the popularity of racist parody. Though audiences were segregated, performers often were not, evidenced in Vaudeville! by a 1923 gelatin silver print of Bill “Bojangles” Robinson and Sophie Tucker. Photographs and a film clip of Bert Williams, sometimes called America’s first black star, hint at the reason fellow vaudevillian W. C. Fields called him “the funniest man I ever saw, and the saddest man I ever knew.” 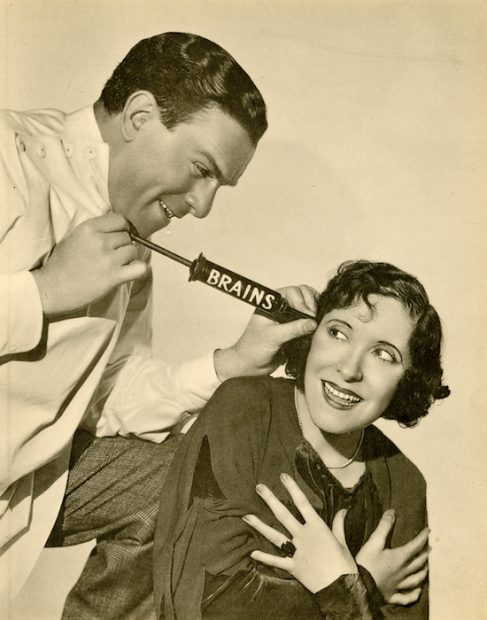 Germans, Irish, and other European and ethnic immigrants were also caricatured, often in skits in which confusion caused by dialects and accents formed the basis for humor. The comedy duo Weber and Fields became one of the most successful acts in this niche. They also represent the tradition of partner acts in vaudeville, which included such teams as Abbott and Costello and Burns and Allen. Looking at Weber and Fields photographs in Vaudeville! I couldn’t help thinking of Gilbert and George. And indeed, a dinky bob of research on the artworld G-men confirmed that the analogy is noted often. Another obvious parallel between vaudeville and performance art, in addition to the aesthetic hallmark of anything-goes-as-long-as-the-viewers-can-stand-it-and-sometimes-even-when-they-can’t, is the tableau vivant or living sculpture work of Luigi Ontani and other contemporary artists, represented in Vaudeville! by the 1923 gelatin silver print The Four Nightons and their Statuary Act. 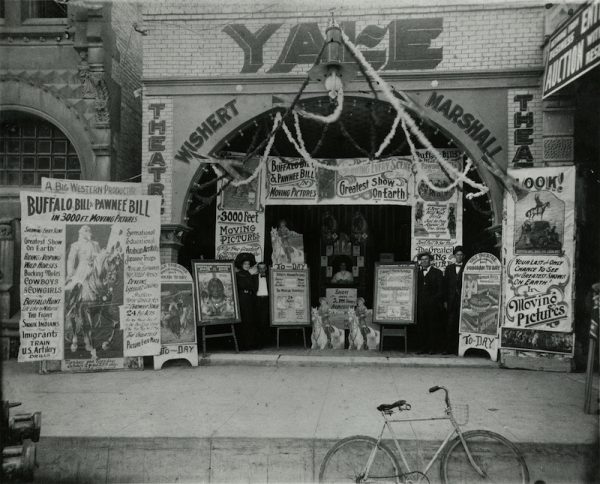 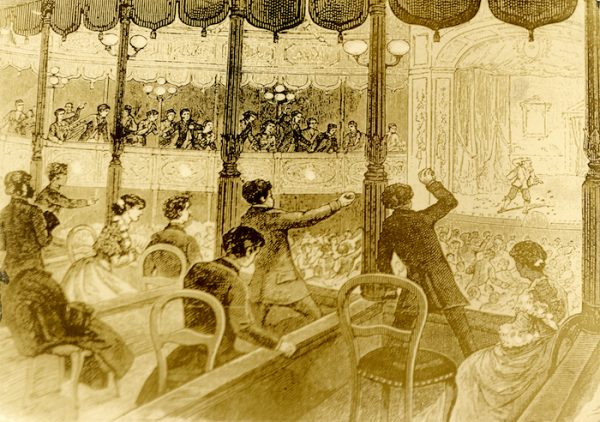 A section in the exhibition titled “Will It Play in Peoria?” tours the vaudeville circuits that covered the U.S. in the late 1800s and early 1900s. Chronicling the various moguls of the business and how they sanitized variety saloon fare (such as the shows presented at the Vaudeville, a saloon on San Antonio’s Main Plaza that hosted the famous killings of outlaws-turned-lawmen King Fisher and Ben Thompson in 1884) to appeal to the more civilized masses, Vaudeville! includes a 1925 gelatin silver print of the Majestic Theatre, a vaudeville house built in downtown Austin in 1915. The grand palace of entertainment survives today as the Paramount Theatre. A 1911 gelatin silver of Austin’s long-gone Yale Theatre, advertising a movie of the Buffalo Bill and Pawnee Bill western extravaganzas, represents the popular nickelodeons that presented short films that often featured vaudeville stars. Contracts, original letters, a list of performers behind on their agents’ payments, and other documents note the hard lives of many touring vaudeville artists. An 1885 illustration of the audience throwing food at performers in San Francisco indicates that theatergoers were not shy about critiquing a performance. 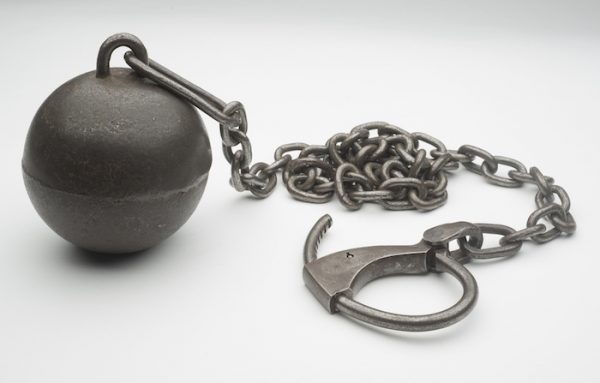 A nifty array of items from the Center’s extensive Harry Houdini Papers documents the famous magician’s vaudeville act. SEE the death-defying Houdini escaping from a straightjacket while hanging from a crane in Pittsburgh circa 1916! SEE the actual heavy ball and chain Houdini shed in miraculous escape feat after feat! SEE Houdini practicing his extraordinary and spectacular Water Torture Cell performance of 1914! Large color posters of his Vanishing Elephant Act and his Milk Can Escape Act hint at this unique performer’s appeal to the public. 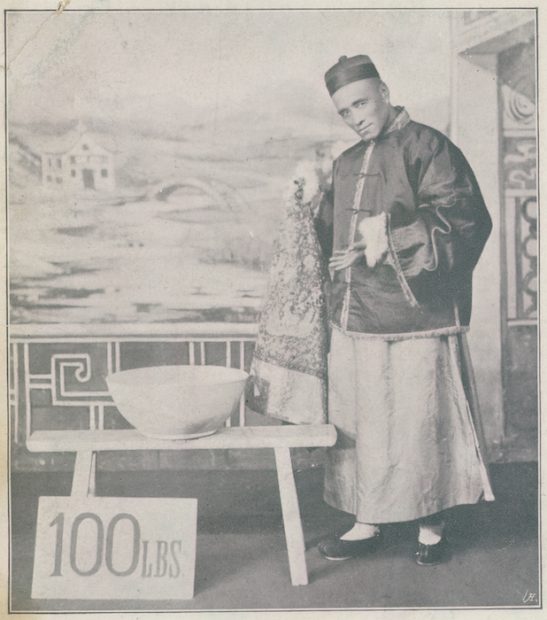 Though he was not nearly so well-known, I found the 1905 halftone print of magician Ching Ling Foo even more interesting. Born Zhu Liankui in Beijing, he studied magic in China before heading for the States in 1898, where he became a hit on the vaudeville circuit. In one of his best-known feats, he produced a large bowl of water from a cloth, then reached into the bowl and pulled out one of his children. The American magician W. E. Robinson copied his act as Chung Ling Soo until one of his tricks failed and he was shot dead onstage. 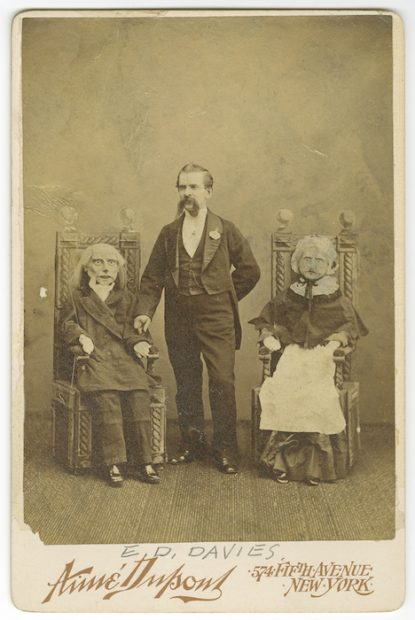 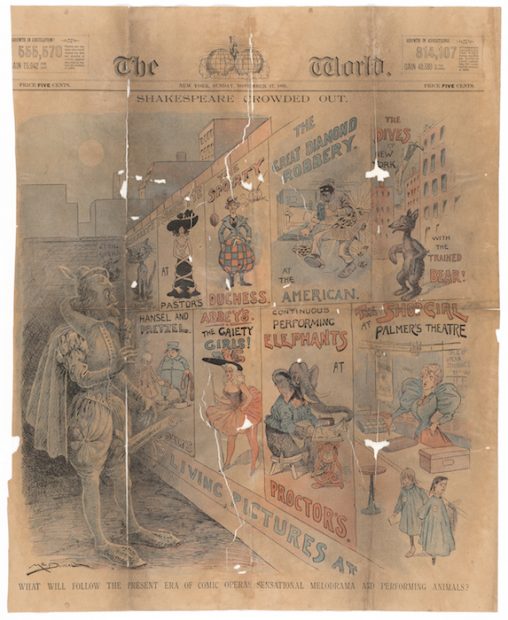 I’m a goner for cool vintage graphics and images, and Vaudeville! delivers such visualrifica in spades. A 1921 gelatin silver print of five or six year-old future jazz drummer great Buddy Rich as “Traps, the Drum Wonder” looks almost otherworldly. An 1874 albumen print of ventriloquist E. D. Davies with two of his large puppets looks even more so. And 1915 gelatin silver prints of vaudevillian Roy Arthur as a bizarrely clad Arabian dancer and as the vagrant clown Bunky Doodle indicate the versatility of many vaudeville performers. A facsimile enlargement of an 1895 editorial cartoon from the New York World lamented that Shakespeare had been “crowded out” in “the present era of comic opera, sensational melodrama, and performing animals.”

A 1928 gelatin silver print, The Marx Brothers as the Four Muskateers, reminds me of an oft-told tale about an important moment in the Bros’ vaudeville history that is said to have happened in Nacogdoches. Versions of the story set it in the 1900s or the 1910s. Touring as a noncomical musical ensemble called the Four Nightingales, the Marx Brothers played the local opera house. In the middle of the performance, audience members heard someone hollering in the street about a runaway mule. The audience streamed out of the theater to witness the rampage. When the audience members returned, an insulted Groucho began berating everyone present. Instead of taking offense, the Nacogdoches crowd roared with laughter. The comedy empire of the Marx Brothers was born, and Groucho was often heard to reprise one line from that memorable performance: “Nacogdoches is full of roaches.” 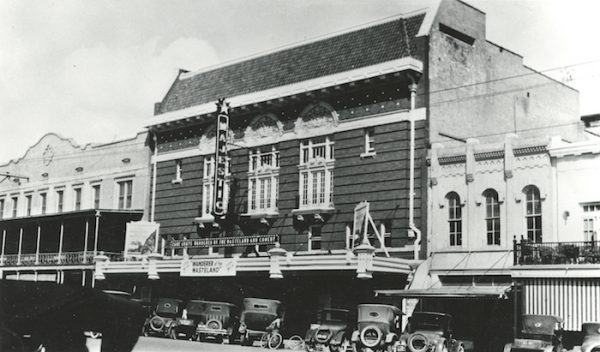 Though the Center holds several outstanding photographs of him, one of my favorite vaudevillians is not included in Vaudeville! Bee Ho Gray had one of the most unique acts of all. As recounted in the lively 2014 biography The Legendary Life of Bee Ho Gray by a descendant, Wimberley-based writer Clark Gray, Bee Ho was awarded his unique moniker by the Comanche chief Quanah Parker. A friend of Will Rogers, Bee Ho enjoyed a long career in vaudeville and Wild West shows as a trick roper and rider, knife thrower, whip artist, banjoist, actor, and comedian. But the best story of all was how Bee Ho teamed up with a crooning, yodeling coyote in 1934 when he was down on his luck in Comanche County, Oklahoma. Soon, Bee Ho and his coyote sidekick were appearing on nationwide radio with the likes of Bing Crosby and stealing the show onstage. “Yodeling Coyote Tops Tabor Bill,” effused a 1937 headline about a performance at Denver’s Tabor Grand Opera House. When the crowd wouldn’t stop cheering, a sheepish Bee Ho ambled back out and drawled, “Well folks, it’s been so long since I was called back that I’ve plumb forgot my encore number!”

*Some sources have Vander Clyde’s full name as Vander Clyde Broadway. There are also discrepancies in his date of birth and the various stories of how he started performing dressed as a woman.