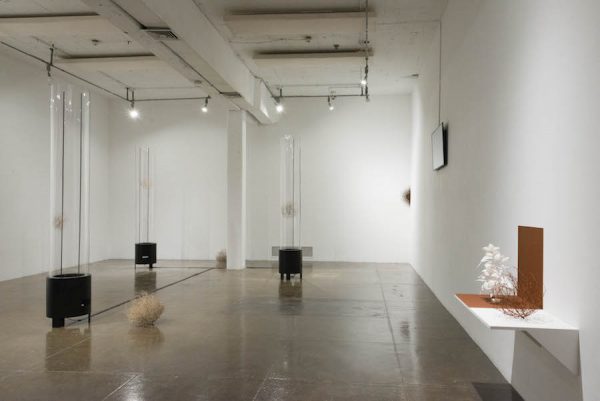 All three current Artpace resident exhibitions in San Antonio address freedom and constriction of the individual, nature, and culture. The shows — one by a Texas-based artist, one by a national artist, and one by an international artist — range from a serene installation to video work to pornographic collage, but all are engaged in processing avenues of release and the systems of control. 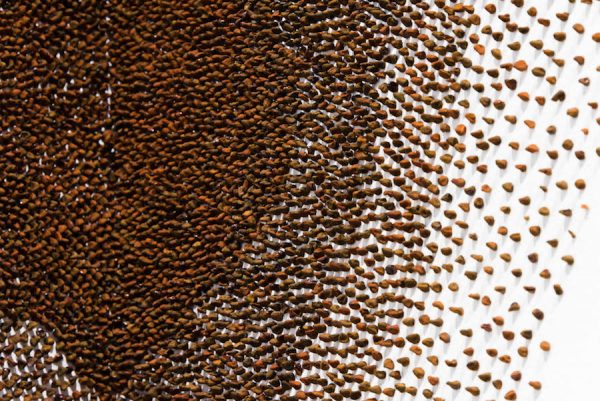 Juana Córdova, an Ecuadorian artist, centers her show Chronicles of Uprooting on two plants: achiote and the tumbleweed. Achiote, since the pre-Colombian era, has been made into a spice, as well as a textile and a cosmetic dye. Achiote seeds resemble small red corn kernels or pebbles, and Córdova assembles them into an arresting concentric mandala, titled Exodus, at the southwest corner of the gallery. The piece has an amorphous natural design and order to it; it is not a rigid grid, but more the murmuration of birds, denoting the organic flow of migration (be it seeds or a population). Exodus is split across two planes, suggesting the actual structural difficulties of passage and the triumph of remaining connected to a culture, lineage, and history. 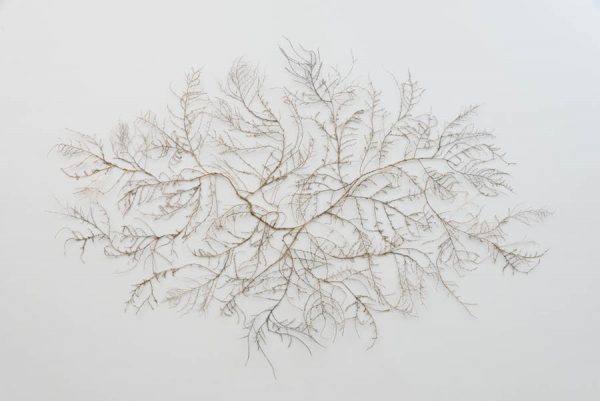 Tumbleweeds arrived in the America’s in a flaxseed shipment from Russia and are now one of the ultimate symbols of the American west, connoting distance, loneliness, and freedom in their airy roll. Córdova places tumbleweeds in enclosed glass tubes with fans running to make them billow and float in perpetuity. Like Exodus, with this work Córdova plays the plane, switching tumbleweeds from their horizontal trajectory to the vertical as if they were part of some cosmic pneumatic tube delivery system. Córdova, in the gallery statement, writes: “I see tumbleweeds as a symbol of freedom, a plant that travels through deserts with the help of the wind. It is a species that detaches from the land and scatters its seeds aimlessly.” On one of the walls, Córdova flattens a tumbleweed into a latticework resembling arteries or a root system. The dichotomy between this piece and the floating tumbleweeds is piquant; in some lost stasis of ennui, the tumbleweeds drift through a tube but never go anywhere, and as can be the case in life and migration, they hold a record of the past — one’s network and history. 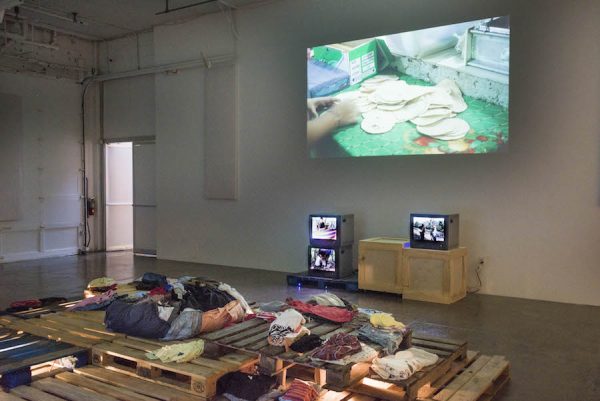 The Texas-based Francis Almendárez‘s show rhythm and (p)leisure concerns the countries of Honduras and El Salvador, where his parents and grandparents migrated from, respectively. These two countries are the homes of many migrants making the perilous journey through Mexico towards the U.S.A. — which is, not coincidentally, a major cause of their dire circumstances. The U.S. supported the military dictatorship’s death squads in El Salvador in the 1980s, during the country’s civil war. Elliot Abrahams, who was tasked with explaining away the El Mozote Massacre, is still in the halls of power, now advising the Trump administration and angling towards an invasion of Venezuela. In Honduras, the U.S. under President Obama and Secretary of State Hillary Clinton supported a military coup that ousted leftist president Manuel Zelaya and turned the country into a neoliberal free-for all where environmental activists were assassinated, multinational companies rapaciously pillaged the resources, and crime bloomed. 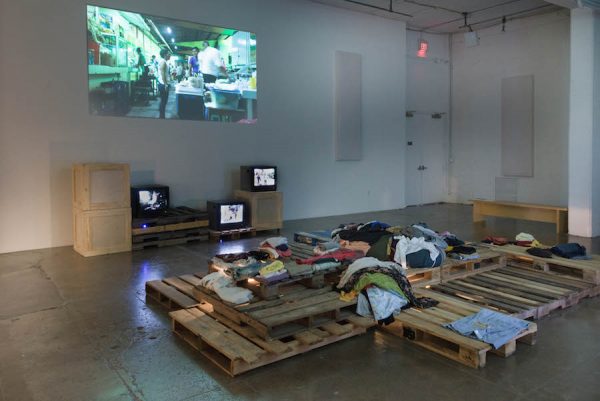 Almendárez does not focus on or highlight the histories of these countries and the US’ involvement with them, but that history lays ambiently in the background, like the sound of wind and insects in his video pieces, and coiled in the piles of clothes placed throughout the exhibition. Almendárez shot a variety of videos in Honduras and the mountains of El Salvador of people working, cooking, and doing a variety of menial labor, and he juxtaposes those with videos of leisure — street music, soccer, dancing. Throughout the gallery, there are piles of clothes made from materials such as achiote dye and sewn in factories throughout the global south, worn, and eventually discarded and put into landfills (often back in the global south). The clothes piles, which can be used as lounges to watch the videos, are charged with a global fatalism. These piles in conjunction with the videos (with their overlapping, beautiful sound design of field recordings) create an exhibition with a haunting and mournful hypnotic effect. Almendárez quietly articulates the monstrosity of the global chain and its ruthless machinations while highlighting the humanity of the people caught in the thresher. 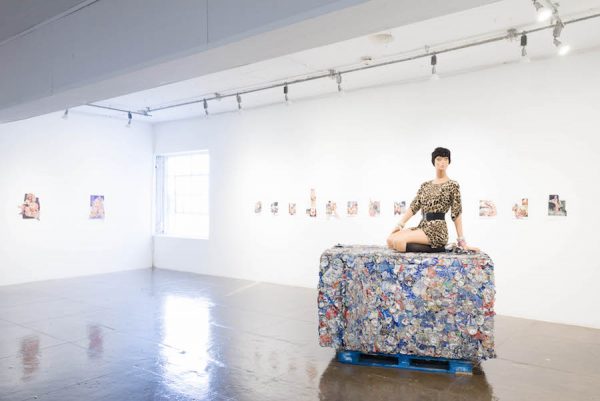 The third show, titled Wimmin, is by Narcissister, a provocative, masked, merkin-clad artist from New York. The show at first seems strikingly different in tone and aesthetics from the subtle and pastoral works of Almendárez and Córdova, but there are overlapping themes of power, control, and freedom. Narcissister’s show with laser focus skewers the male dominance and the ponderous history of contemporary art (minimalism, abstract expressionism, etc.), and points to the lurid, grotesque, and often absurd misogyny and objectification of women. 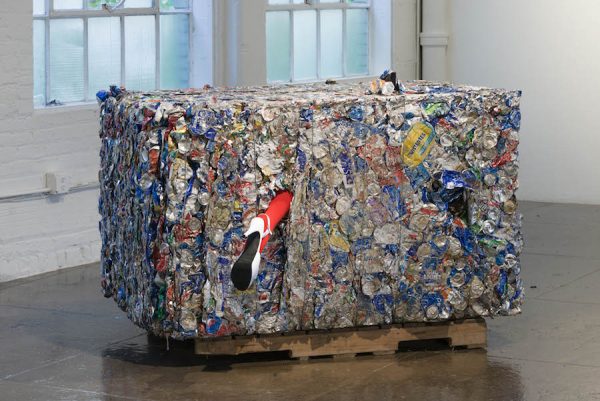 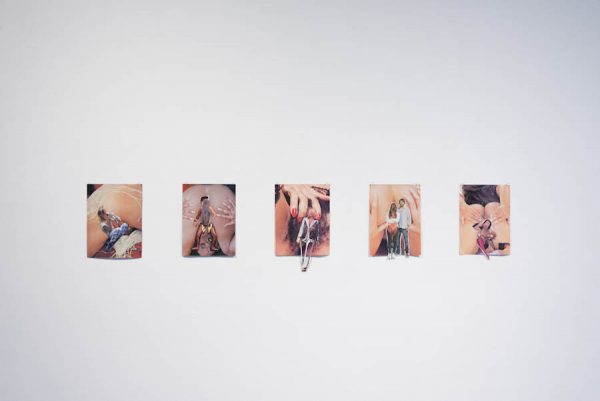 Narcissister creates blocks of aluminum cans — an obvious nod to Donald Judd — but the blocks are interrupted by the protruding high-heel clad leg of a woman. These sculptures cannily work on two levels, like a mask slipping on and off. The blocks speak to the erasure of women in male-dominated schools of art, and also serve as a reclamation of forbidden space. The Face is a large, pointedly absurd kinetic sculpture that throughout the exhibition is activated and controlled by the artist, like a twisted Wizard of Oz, and it plays on the hyper-male, “alpha” work of Richard Serra and John Chamberlain. Narcissister’s paper works layer cutouts from pornography over pages from home and garden and interior design magazines. The genitalia cut from the pornography are layered to become abstracted, and again there’s a double message — the male gaze essentially disintegrates into abstraction in its fugue of horniness, and the artist asserts ownership of collage and abstraction through depictions of the body. 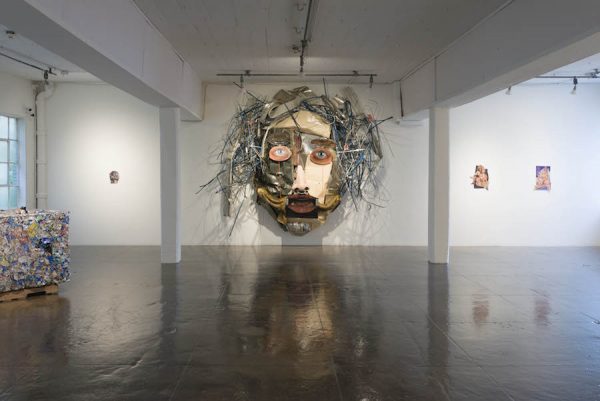 On Saturday, September 7 at 1 p.m., Narcissister will be present to activate The Face for the last time, and several of the crushed aluminum blocks will be activated by “extra Narcisissters.” Don’t miss it.

A Greeting Across the Seas: Fall Exhibitions at...