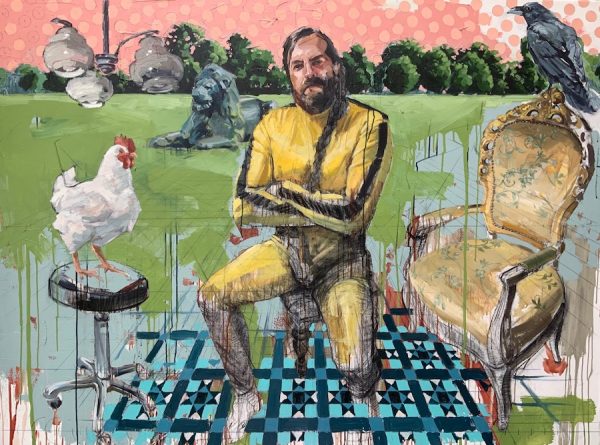 The following is a rundown of three shows to catch in San Antonio in the last weeks of our Texas summer.

The London-based Portuguese artist Emmanuel De Sousa creates detailed, technically impressive acrylic and charcoal works that bleed and run as if the growing heat of the world caused the composition to unsettle and drip like an egg yolk. Bruce Lee Shoes references the iconic martial arts legend and his yellow jump suit (replicated by Tarantino in the Kill Bill movies) in a surreal dream tableaux of pelicans, balloons, and luxury furniture. De Sousa throws in a lot of charged symbolism: American flags, bathyspheres, etc., which all seem secondary to his technique. He employs a vaporous glide to all of it, as if the reel was being sped up or rewound.

The show consists of several works of the Bruce Lee jumpsuit, depicted as worn by the artist and his friends in classicist portraits that are simultaneously regal and wry. The jumpsuit is an armor of sorts, the way that one’s pop cultural affinities provide a cloak against the world. (The Wing Luke Museum in Seattle has an exhibit about Bruce Lee, with a section where people can post notes around a shrine of sorts. Unsurprisingly, it is filled with post-its in often tiny, neat handwriting about how Bruce saved their life, got them in shape, helped with grief, etc.) It’s easy to allow our pop-culture icons to fade into the aisles of grocery stores like doo-wop hits, but these are, in a sense, our true monarchs, and they do have a claim to a throne.

The best sequence of the show is a grouping of small portraits of people. They are placed in the hallway, to replicate a subway tunnel. Some are famous, for both good and bad reasons. As you pass walk through and pass them by, in fact, you realize that some may even be legends.

At Cinnabar through August 21 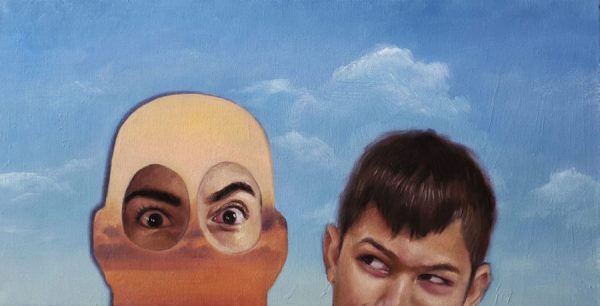 Presa House continues to be the prime gallery in San Antonio for showcasing a daring and original array of Latinx artists. Treviño is an artist who is emblematic of the renaissance of a generation of young artists who were raised in the Rio Grande Valley and studied at UTRGV, developing a lush, dreamy portraiture style. Treviño’s works are thematically simple, depicting himself or his friends, but imbued with a jolting frisson of fractured perspective. The title, Behind Our Walls, speaks to the partitioned existence of immigrants and minorities and how such partition is both objectively real and deeply internalized. 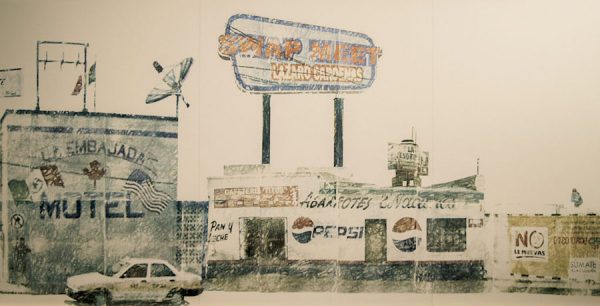 Serna’s Casa de Cambio is described by the artist as: “…where you go to exchange currencies either from dollars to pesos or pesos to dollars. Growing up my home, was like a Casa de Cambio, a place of transition, negotiation, and exchange.”

Serna’s washed-out prints of South Texas and border landscapes and icons, in particular the ephemera of lavanderias and bodegas, are deeply haunting, melancholic, and beautiful. Serna finds a transient mystery in the hieroglyphics of a specific place. He subtly explicates the absurdity of borders and boundaries; there is a trail of brands, billboards, tickets, and IDs — replicating themselves, becoming fainter and faded from water and the sun — but still a record of existence, of a people, and a land.

At Presa House through August 31 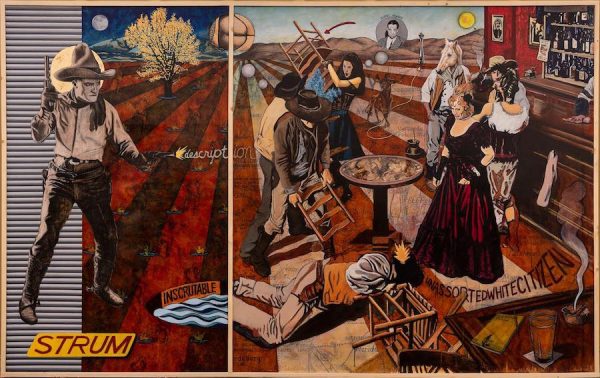 The Wheeler brothers’ intricate collages and painting warp geography: Bryan’s works are deeply Western, referencing Ed Dorn’s “anti-epic,” comic-Western poem Gunslinger, while Jeff’s collages reference his recent residency in Croatia. Bryan’s large works are staggering depictions of the myth of the west, both witty and devastating in their stark summation of the dangers of magical thinking. 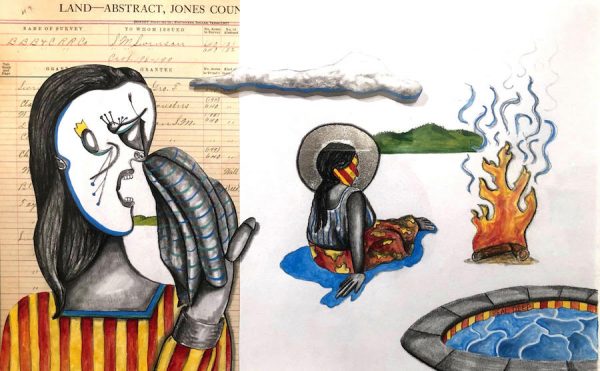 Jeff’s pieces on ledger paper depict figures that are grotesque and absurd. Jeff has a gorgeous and light technique, and the works resemble the luminous ledger paintings of Plains Indians. His collages have a fluid dream logic, the way associations seem to gravitate to a magnetic pole in a sequence that is somehow both random and ordered. In the both of the brothers’ works, there is a chaos that is planned: something has been coming for you all this time.

At Fl!ght Gallery through August 31

It’s important to note that Jesus Treviño began studying classical approaches to painting at Texas Southmost College in Brownsville, TX. He then transferred to the University of Texas at Brownsville that soon later became UTRGV. He was mostly on the Brownsville campus. This is where he began to mix his classical technique with more experimental approaches. He is now a UT Austin MFA candidate. I’m incredibly proud of what he’s been able to do in such little time.