by Barbara Koerble May 24, 2019
FacebookTwitterEmail 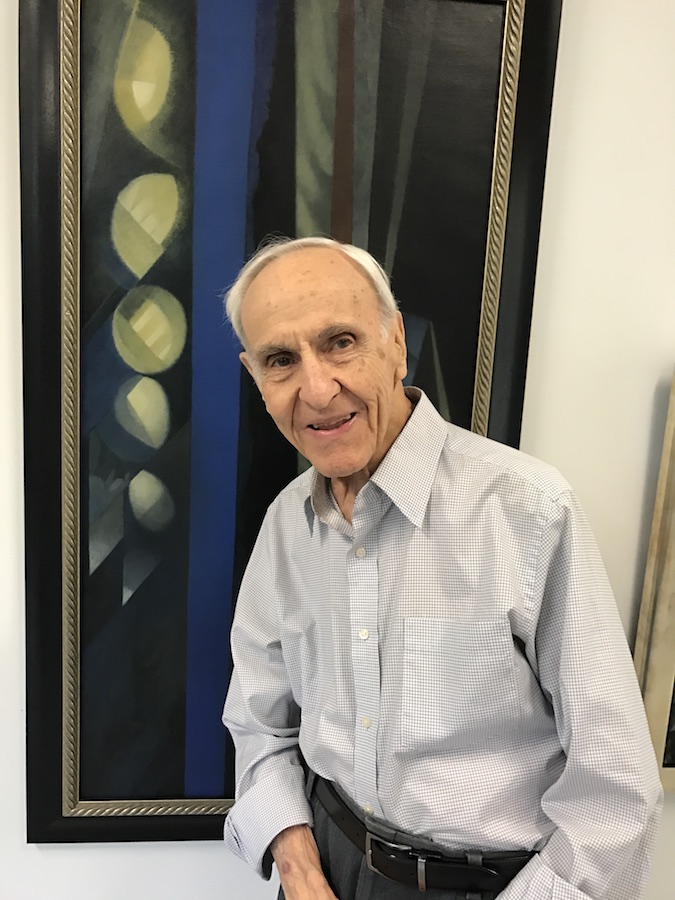 The passing on May 20 of George Grammer, aged 90, in a New York City hospital was mourned by Texans as the loss of a friend and a Fort Worth native son. Even though he had lived in New York City for decades, he maintained close ties with many friends and collectors in Fort Worth and Dallas over the years through his periodic local exhibitions. Two recent retrospective exhibitions honored his artistic legacy — George Grammer: Full Circle held in 2017 at Texas Wesleyan University in Fort Worth co-curated by BB Moncrief and Carter Bowden, and Texas Moderns: George Grammer, co-curated by Patrick Kelly and Scott Barker for The Old Jail Art Center in Albany in 2015.

These exhibitions showed the wide variety of subject matter he painted, from his Texas-inspired images of oil derricks to Manhattan skylines, country landscapes to still lifes. His media primarily consisted of oil, casein, watercolor and lithography, and he later took up acrylics. Scott Grant Barker and Jane Myers included Grammer’s work in the exhibition Intimate Modernism: Fort Worth Circle Artists in the 1940s at the Amon Carter Museum of American Art in 2008. The artist was invited to be the Honorary Chairman of the 2018 Preservation is the Art of the City annual exhibition hosted by Historic Fort Worth Inc. — another indication of the high regard in which he was held locally.

Born on October 2, 1928 in Fort Worth, Grammer showed his early promise in art at Paschal High School in Fort Worth, graduating in 1945 after benefitting from the tutelage of Creola Searcy, and he received national awards for painting and printmaking in student competitions. He received a full scholarship to then-Texas Wesleyan College, where he was strongly influenced by his professor Kelly Fearing, a prominent member of the Fort Worth Circle of artists. Fearing became his mentor and provided the younger artist with an introduction to this notable group of older artists, who recognized his talent and welcomed him. Grammer worked with Evaline Sellors, another important figure in his early development, on costume designs for the Reeder Children’s School of Theater and Design. 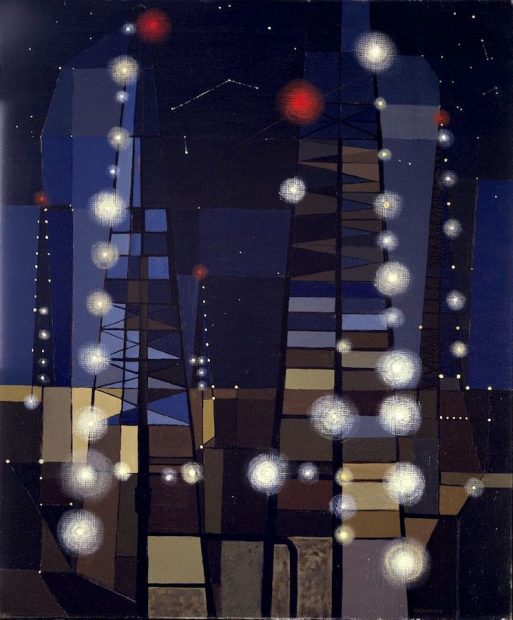 George Grammer, Oil Derricks at Night, 1952. Collection of the Dallas Museum of Art. Via the DMA: “The geometric language of cubism is adapted to a familiar sight around Texas in this work by Fort Worth School artist George Grammer, who won the E. M. Dealey Purchase Prize for this work in 1952 as an example of the best emerging art in the state.”

Barker notes in an essay for Intimate Modernism that Grammer’s career was launched in 1946 when he entered the Local Artists Show held annually at the Fort Worth Arts Center: “Although he was inexperienced, Grammer possessed a rich imagination and exercised meticulous execution in his work. He would become known for complex, abstracted images of cityscapes and night scenes.” In 1950, Grammer first exhibited one of his iconic abstract images of oil derricks, Derricks by Night. These nighttime industrial landscapes featured abstracted vertical elements and cubist reflections of halos of light emanating from the derricks. Grammer received another early boost in 1951 from the support of Betty McLean as one of several Fort Worth Circle artists shown at her Dallas gallery. She also helped support his artistic development when he received a year’s scholarship to Instituto Allende, in San Miguel, Mexico. In the same year, Grammer was one of four Texans to have his work selected by Edith Halpert for a debut in New York City in A New Generation at her Downtown Gallery. 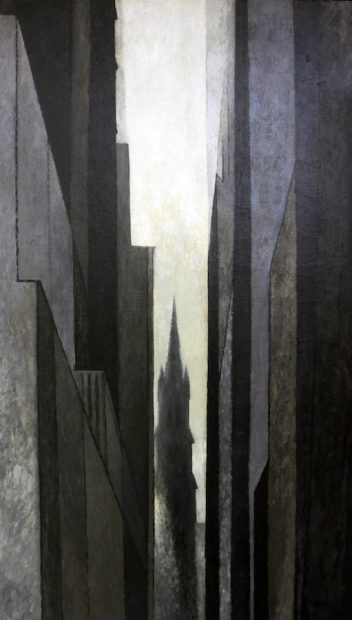 Fort Worth newspapers continued to chart Grammer’s successes as “local boy makes good” (Nedra Jenkins, Star-Telegram, 1956) after he and his wife moved to New York City in 1954. In New York, he attended the Art Students League and the New School. He subsequently exhibited at the Downtown Gallery, Wildenstein, Knoedler, Ward Eggleston, the Green Mountain Gallery, Tiffany & Company, the Architectural League and the National Academy of Design in New York City. Even with his New York successes, he regularly exhibited in Texas — at Fort Worth’s Fifth Avenue Gallery, the Gallery in the Square and the Fort Worth Gallery, and the Fairmount Gallery and David Dike Fine Art in Dallas. 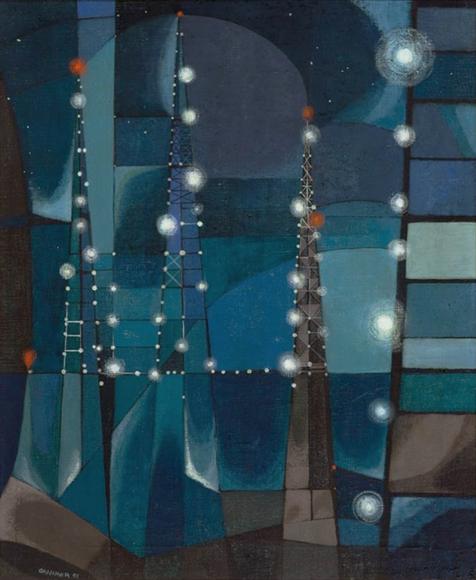 He and his wife, the former June Amos, returned to Fort Worth often to visit family and friends. Morris Matson, a Fort Worth art collector, recalls his years of friendship with Grammer: “I traveled with him extensively, driving to museums and collections. He was always patient and kind to all. In Fort Worth wherever we appeared, he was gracious to all his friends and acquaintances and never appeared to be uninterested or too busy to talk.”

His artwork is preserved in the collections of the Amon Carter Museum of American Art, the Dallas Museum of Art, the Modern Art Museum of Fort Worth, the Old Jail Center, the Texas Fine Arts Association, the Texas Watercolor Society, the Witte Museum, the Art Institute of Chicago’s Block Collection, and D.D. Feldman Collection of Contemporary Texas Art and numerous private and corporate collections.

Oh, thank you. This was nice. I met him once at the Amon Carter. More like saw him, but I was glad for even that. Thanks for sharing. Maybe the Amon Carter will find something special as a remembrance when they open back up.

As architect for a building called TOWER EAST in NYC I commissioned George to paint a large view of the NYC . This was 1960. I am the proud owner of two of the sketches he painted and I cherish my time working with George. The Grammer’s became close friends and I also own a number of pencil drawings of models we drew together.
Gerge and June were great very talented artists and human beings. RIP George.

Uncle George was my mother’s younger brother there’s also a younger sister and all of them were talented artists. My mother Dorothy is now deceased but my Aunt Dolores is still living. In the past few years I’ve had an opportunity to be closer to George. He came almost every year and sometimes more often to visit Fort Worth. It was my pleasure to be chauffeur when he was visiting. We spend our time discussing Broadway musicals and lovely plays that we both appreciate it. This was a lovely article and I appreciate the acknowledgement of his immense Talent.