Koons Sets Record at $91 Million: Most Expensive Work by a Living Artist 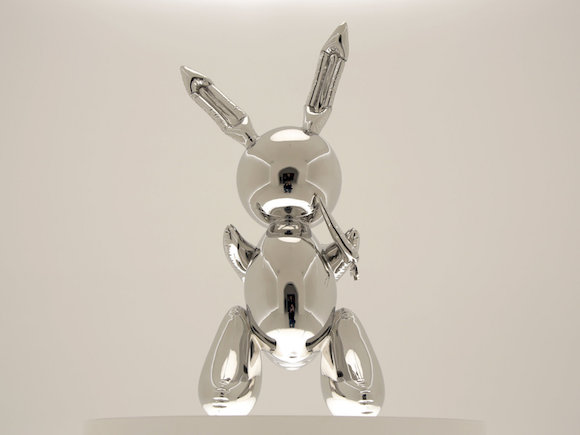 At Christie’s in New York on Wednesday night, Jeff Koons’ iconic stainless steel Rabbit (1986) sold for $91 million to an unnamed collector. (Bidding on behalf of the client was dealer Robert Mnuchin, the U.S. Treasury Secretary’s dad.) The lot was one of 11 works on offer (via NPR) “from the collection of magazine publisher S.I. Newhouse, the longtime chairman of Condé Nast who died in 2017.”

This isn’t the first time Koons has been the most expensive living artist on auction record. In 2013, Koons’ Balloon Dog sold for $58.4 million, setting a record. Then David Hockney’s 1972 painting Portrait of an Artist (Pool with Two Figures) sold at auction last year for $90.3 million, unseating Koons. Now, the rabbit.

Rabbit, in addition to being from the collection of S.I. Newhouse, was indeed desirable. Via NPR: “The sculpture was cast in 1986 in an edition of just three, plus an artist’s proof. The one sold Wednesday was the last one in private hands, with the others in the collections of The Broad Art Foundation in Los Angeles, the Museum of Contemporary Art in Chicago, and the National Museum of Qatar.”

Some other records were set at the same evening sale. Robert Rauschenberg’s Buffalo II (1964) sold for more than $88 million, a new high for Rauschenberg’s work, and a work by Roy Lichtenstein, Kiss (1962), sold for $31 million, also a new record for the artist. Also of note, via Christie’s, “…Spider  by Louise Bourgeois, a monumental creation that dwarfs the viewer under its graceful curves, sold for $32,055,000. Conceived in 1996 and cast in 1997, the spider — an autobiographical leitmotif in Bourgeois’s work — established a new world auction record for the French-American artist, and a new record for a contemporary sculpture by a female artist.”