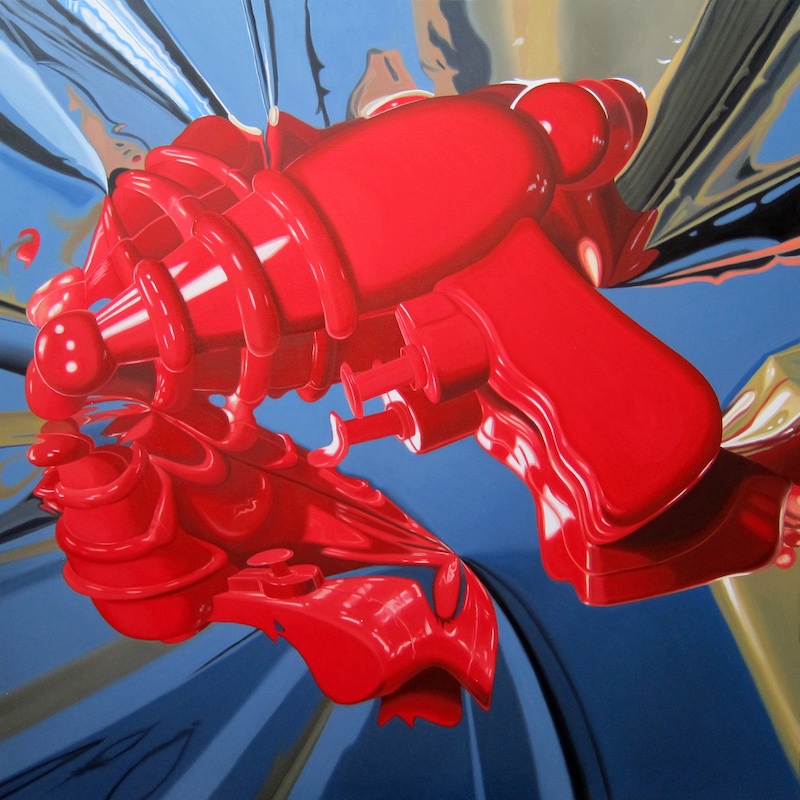 Artist Shannon Cannings was raised in Pittsburgh, PA, received her BFA from Tyler School of Art in Philadelphia, and her MFA in painting from Syracuse University. For the past 19 years, she has lived and worked in Lubbock, Texas where she teaches foundation drawing and design at Texas Tech.

For the past decade, her large, colorful, hyperreal paintings allude to guns and gun culture with an emphasis on toy gun marketing and packaging. At this political moment— with the heightened rhetoric surrounding gun control and regulation, as well as the increase in school shootings — her work feels particularly salient. Her solo exhibition Triggered opens at Cris Worley Fine Arts in Dallas on Saturday, Feb. 16.

Colette Copeland: When I first saw your work, I immediately thought of Sacha Baron Cohen’s docu-satire show Who Is America? — specifically the episode where he duped conservative politicians into endorsing  a toddler/kindergarten gun-training program.

Like your paintings of toy guns, Baron Cohen’s real guns employed bright colors and packaging to appeal to a young consumer. His use of language in branding these kid guns intentionally undermined the deadliness of the weapon, similar to the names of toy gun products mentioned in your artist statement. How do you see your work in relation to Baron Cohen’s satire?

Shannon Cannings: I had not seen that video! I think the video functions differently than my paintings, but there is some definite overlap in content.  His work is intentionally shocking and dividing. I am intentionally subtler in my approach and hoping for a wider, more contemplative audience with more dialogue surrounding the issue.

CC: Toy guns have been your primary subject since 2010. The work originated with a realistic pop style, using exaggerated drop shadows with a plain or bright color background. With the exception of a softer, more impressionistic approach in 2013-4, the work has continued to evolve, with more hyperrealism, more flair, color and emphasis on the packaging. In some of the current paintings, I see a reference to anime. How has the work evolved and how does the shift in style reference a shift in cultural/political issues surrounding gun control?

SC:  There is a definite style change. When I first started working with the toy guns, I had no idea where I was going with it. I never imagined it would become such a focus.

The first paintings were formal, quieter, simpler. They were designed to be big, shiny, pretty eye candy to draw the viewer in and then hopefully have them ask questions about their relationship to toy guns and gun culture, or to question mine.

As I started to formulate a more complex understanding of gun culture, my work started to change as well. I began thinking about the packaging — sometimes the wording, color, typeface, and/or the shiny plastic wrappings. All of this ephemera is designed to grab kids’ attention and make them want this thing, quite apart from what the thing actually does. The packaging [may as well] be for bubblegum or construction toys, or cereal. But [here it’s] in the case of the things I paint: fake weapons. They want them before they even know why they want them. 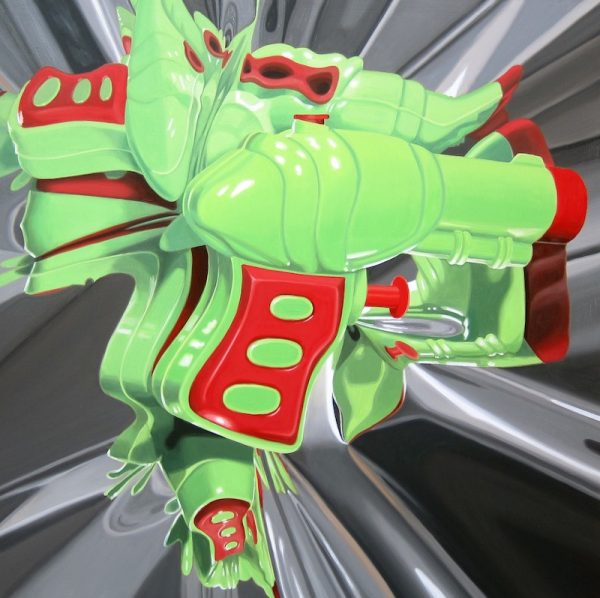 As I have been painting these, the gun culture noise has certainly ramped up. I was painting guns when the Sandy Hook school shooting occurred, and I had to stop to pick up my first-grader from elementary school. I was painting guns when the Pulse, Las Vegas, and Parkland shootings happened. The noise of the media and politicians is loud — cacophonous and confusing. The paintings with the Mylar backgrounds started to happen when the noise of gun culture became louder than common sense. The Mylar reflects, distorts, and echoes the plastic gun nestled into its folds, making the image harder to understand. I had not thought of anime with this work. But I can see a similarity in the distortion, visual noise, and appeal to a younger audience. 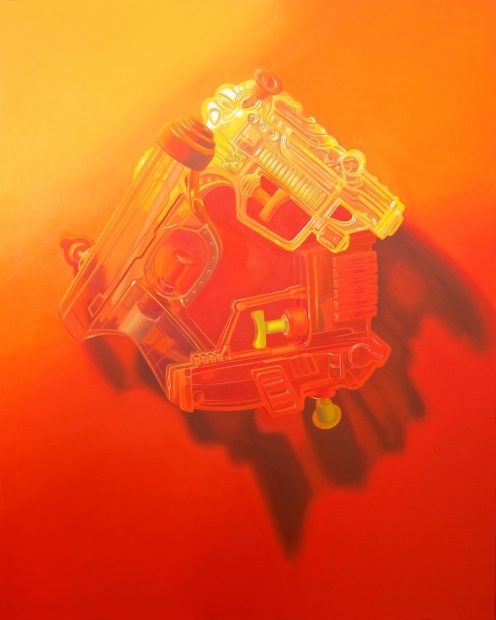 CC: We have a few things in common. We both grew up in Pittsburgh, both lived in Philadelphia, and both received our MFAs from Syracuse University. You’ve lived and worked in Texas for 19 years now. I’m still a relative newbie here, at 6.5 years. What was your initial reaction to gun culture when you moved to Texas, and most recently, when the concealed carry law was passed for Texas public university campuses?

SC: Where I grew up in the suburbs of Pittsburgh, you could probably throw a rock and hit a deer hunter. There are plenty of guns. But Texas… Texas has branded its own gun culture. Only Texas can make an environmental clean-up campaign (Don’t Mess with Texas) sound like a threat. One of my neighbors proudly flies a “Come and Take It” flag over a perfectly manicured lawn, and my students wear shirts with that slogan. Sometimes I get the sense that they are really itching for you to try to take it and give them the excuse to use their toys.

I have taught at Texas Tech as an adjunct professor in the School of Art for 19 years. I mainly teach the freshman classes, so I see, firsthand, their transition to college and adulthood. For many, this is the time of discovery and I love to watch them become themselves. But for some, this is really hard. They are away from home for the first time. They have to set their own schedule, decide study habits, sleep, food, relationships. They don’t always make great choices, and college should be a safe place for them to work it out. As the person grading their class performance, I am sometimes at the receiving end of angry emails and occasional breakdowns. I feel a lot less safe because of the new law. I never meet students in my office or in private places. All issues are dealt with in the hall or in email. And I always have the thought that an impulsive, angry student may have access to a weapon on campus. 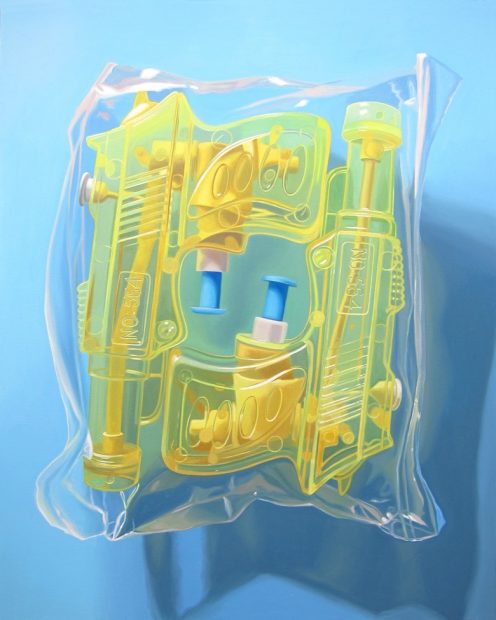 CC: I haven’t met too many people who aren’t gun owners in Texas. I wonder about your Texas collectors, and if the subversive element in the work is lost on them.

SC:  I know that the owners of my paintings are all over the political spectrum. And I know some are gun owners, and some are not. I don’t think the subversion is lost on them. I have never tried to be preachy or push someone to think like I do. I have had people yell in my face or think that I feel exactly like they do. But those are rare. Mostly they tell me stories about toys they grew up with or tell me their views of gun culture.

I would say I am less anti-gun and more anti-gun culture than when I started this body of work. I also think that if we initiate conversation about this rather than scream our opinion, people listen more. People are less likely to shut down and move on if they feel there is room for them in the conversation. Most people agree on common-sense measures to promote gun safety, but the noise of fear and misinformation clouds our judgment. As long as people profit from this culture, it will continue to grow. Hate is a lucrative business. 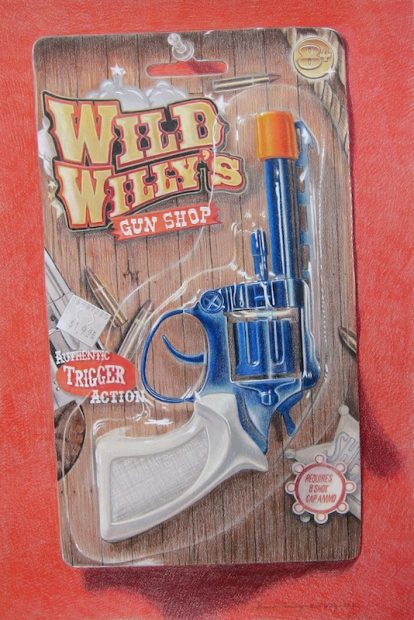 CC: Your exhibition title, Triggered, references the firing mechanism in a gun, but also means to initiate or precipitate a chain of events or reactions. What do you hope the work will trigger in your viewers?

SC: I want it to spark conversation. Yelling into the void of the internet does no one any good. Parenting and teaching have prepared me to have stressful conversations with someone with whom you adamantly disagree, and come out with a smarter argument, a strengthened resolve, and an understanding of a different point of view. If people can have meaningful discussions with others, rather than drawing lines and fighting, then I am glad that the work can be a catalyst.

An opening reception takes place on Saturday, February 16, from 5 to 8 p.m.

Double Trouble: An Interview with Shannon and William...