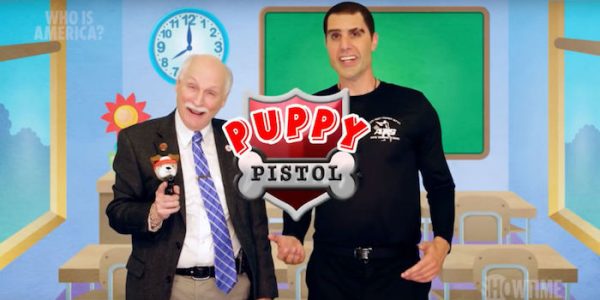 A specific resignation and dread settles over me when I’m watching Sacha Baron Cohen’s new show Who is America? The British comedic performer who gave us Ali G and Bruno and Borat has spent the better part of his career getting unwitting people to reveal something (often unsettling or otherwise hidden) about themselves when faced with an outsized character played by Baron Cohen. In Who is America? (on Showtime) he plays four new characters, all conceived to stump and provoke and incite reactions from Americans who are famous and not-famous, conservative and progressive.

Last week, when the show debuted and the early reviews came out, my internet (maybe not yours) exploded about a certain segment in the show’s first episode in which Baron Cohen, in character as an Isreali anti-terror expert who has a plan to teach children as young as three to use guns, gets some well-known American gun-policy wonks and politicians to enthusiastically agree with him on camera. The segment is so out there that, no matter your politics, I dare you to watch it without involuntarily gripping your face.

In the wake of its airing, liberals wanted to believe that this revelation of prominent Republicans’ support of kindergarten kids’ gun rights could be The Moment That Makes Everyone See Just How Crazy Things Have Gotten. But what Baron Cohen is really showing us is that prominent Republicans have jettisoned basic morality in service to whatever the day’s agenda is. This isn’t news anymore, and we don’t need an audacious British comedian to show us this. These days, no one trolls liberal America better or harder than Republicans do.

The torpor that grips so many Americans — the mix of dismay, resignation, amusement, and confusion — is one that allowed Trump’s ascent in the first place and kept a lot people at home on election day, and it’s been a long time in the making. Alarm bells go off about a piece of really bad news (mass extinctions, cruel immigration policies, Citizens United, etc) and we temporarily freak out, but an overall, sucking torpor has been shaping a path of least resistance for a long time. (Please vote in November, people.)

I write this because one thing I keep thinking about when watching Who is America? is a certain segment that aired on a show called the Jamie Kennedy Experiment, which ran on the TV network The WB from 2002-2004. For that show, the American comedian Jamie Kennedy employed similar tactics to Baron Cohen’s in order to punk unwitting participants, and while Kennedy ventured into some queasy territory with some of his stunts, his show generally played like an updated but still benign Candid Camera: participants generally weren’t targeted for all-out character assassination. I was never more than a casual viewer, but one segment jumped out at me and haunted me for years. I still bring it up at dinner parties, with that same kind of hand-wringing shock people have displayed over Baron Cohen’s kids-and-guns segment.

The Kennedy segment was called Child Island, and for it Kennedy played a (convincing) porn director who has called an exploratory meeting with parents, in a boardroom setting, to see if they’ll sign their kids up for a new reality show in which a handful of ten-year-olds are dropped on an island in the middle of the ocean with no supplies and left to thrash out their own survival, Lord of the Flies style. Kennedy’s sleazy character shows the parents a mock trailer for his new show, which depicts elementary school kids fighting wild boars, vomiting, falling off cliffs, and eventually attacking or killing one another. Among some of the gems Kennedy and his stooge deliver to the stunned parents: “We’re not gonna push your kid off a cliff. But you know, if it happens, we’ll shoot it,” and, “Great shows are not born every day, but kids are.” At the end of it all, after a painful Q&A, two of the four sets of parents at the meeting decide to pass. “It’s just too dangerous.” But two sets of parents agree to let their kids go to Child Island, in the hopes of their kid getting famous and winning the $100K cash prize.

Back in 2003, I thought this Jamie Kennedy segment would somehow blow up the national conversation about greed and celebrity and financial desperation, because it revealed to me how voracious, base, and exploitative the celebrity machine had become. I was sure the segment would launch not just a thousand think pieces, but an actual movement amongst Americans to be far more thoughtful and circumspect about the entertainment they were consuming. I guess I don’t have to tell you that the segment didn’t do any of that at all.

We all talk about the pendulum swing, and how these kinds of extremes right themselves, and that “the arc of the moral universe bends toward justice.” I don’t believe this anymore. But at least I’m learning to spot why. On Baron Cohen’s show, even in light of the more immediately damning segments, the moment that sticks with me is the one that most subtly hints at the depth of conservative guile, as steered by one of its recent master architects. Baron Cohen’s Isreali anti-terror expert, Colonel Morad, is fan-boy interviewing Dick Cheney about Cheney’s war and torture legacy. Cheney is arrogant enough to gently skate over his interviewer’s goofier questions in the service of getting to talk about his contributions in that realm, but about two-thirds of the way through, you can see Cheney shift from self-serious to something more cunning. He decides to just enjoy playing the straight man to this weirdo. As far as Cheney is concerned, there’s nothing that can happen in that interview — nothing — that will undermine the nation’s rightward drift. After all, our collective torpor has been his weapon and his tool all along. 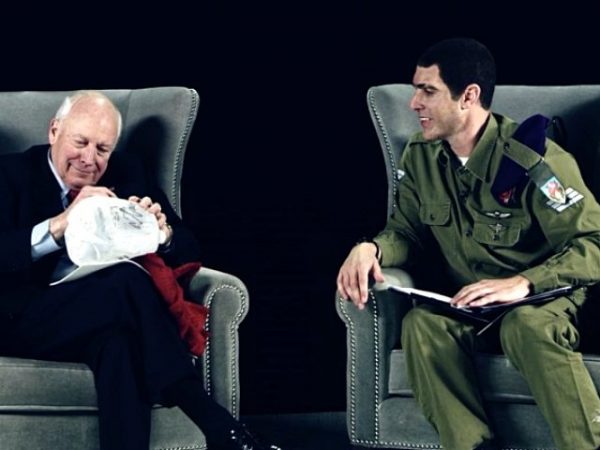 At the end of the segment, when Morad asks Cheney to sign an empty gallon jug that Morad claims is part of a water-boarding kit he’s personally used on people (incuding his own wife), Cheney smiles to himself — a look of such  understated self-amusement I will never forget it — and takes the jug and the Sharpie and signs away.

When I read the Slate.com article and watched the video segment about guns for pre-schoolers, I found it difficult to believe that he really duped all of the politicians. Cohen’s character was such a caricature that it didn’t seem plausible that there would be legit buy-in, much less an agreement to allow filming and subsequent broadcasting of the interviews. I keep thinking/hoping (naively???) that the Republican politicians knew it was a satire and went along with it in the spirit of an SNL skit–lampooning for the sake of entertainment. According to news media, there’s been little-no backlash from anyone after the segments aired. Writer Matt Miller in an Esquire article sums it up, “Cohen isn’t going to change any Republican minds with this. If they watch this show at all, they’ll only see a liberal Hollywood elite taking advantage of honest Americans. What, if anything, is Cohen trying to change? That’s up to people horrified by what they’re seeing.”

Thanks for introducing the word, torpor, to my vocabulary. If we all get busy with getting people to the polls, perhaps we can annihilate this pervasive torpor….

As Harry Overstreet wrote, “Giving people the facts as a strategy of influence [has been] an enterprise fraught with a surprising amount of disappointment.” The “infowar” is really a p.r. war, and Cheney knows his side is winning.

We need to take what lessons we can from Cohen’s and Kennedy’s sallies. I wish I understood better what those are.