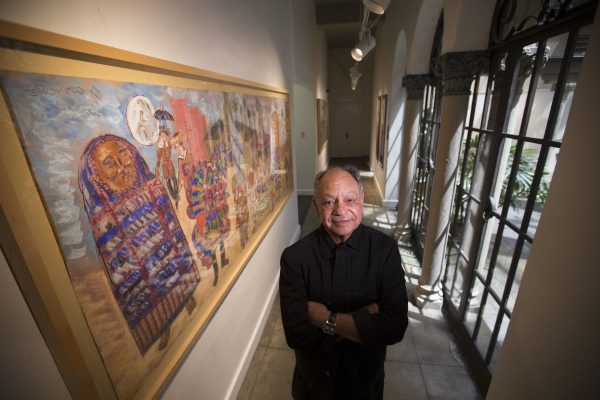 Recently Cheech Marin received a $9.7 million grant from the state of California to go towards completing a museum building to house the actor and comedian’s collection of Chicano art. Named “The Cheech Marin Center” (and colloquially called “The Cheech”), the center is a partnership between Marin, the City of Riverside, and the Riverside Art Museum, to which Marin has gifted his collection.

Marin’s $9.7 million grant from California comes as part of the state’s $139-billion 2018-2019 budget, which was signed into law by Governor Jerry Brown this past June. Up to this point, Marin and the Riverside Art Museum had raised about $3 for the project, which will be housed in a 61,420 square-foot mid-century building that was opened as the Riverside Public Library in 1964. Conversion of the building into The Cheech will be overseen by the architecture firm Page & Turnbull and is estimated to cost between $5 million and $7 million, which includes a new HVAC system, elevator upgrades, and a new roof, all while maintaining the building’s vintage aspects. Ultimately, the building will have a museum store, a cafe, 15,000 square feet of permanent exhibition space for Marin’s collection, 8,000 square feet of temporary exhibition space, areas for lectures and education initiatives, staff offices, and on-site rooms for collection storage.

The Riverside Art Museum’s partnership with Marin has been in the works since the actor and collector loaned the institution more than 60 of his artworks for the 2017 show Papel Chicano Dos: Works on Paper From the Collection of Cheech Marin. From there, Marin and the museum worked with Riverside’s City Council to develop the project and raise funds.

Marin has collected art since he became famous in the 1970s. His collection regularly tours across the U.S. and has made frequent stops in Texas, including recent shows at the El Paso Museum of Art (2018), the Art Museum of South Texas (2018 and 2016), and Texas Tech University’s Landmark Arts Gallery (2014). Marin also served as the Grand Marshal for the 2017 Art Car Parade in Houston.

You can learn more about The Cheech by visiting the museum’s website.

Get Your Fanny Perpendicular And Go See Cheech...