The Rambling Boy: On the Occasion of the 50th Anniversary of HemisFair 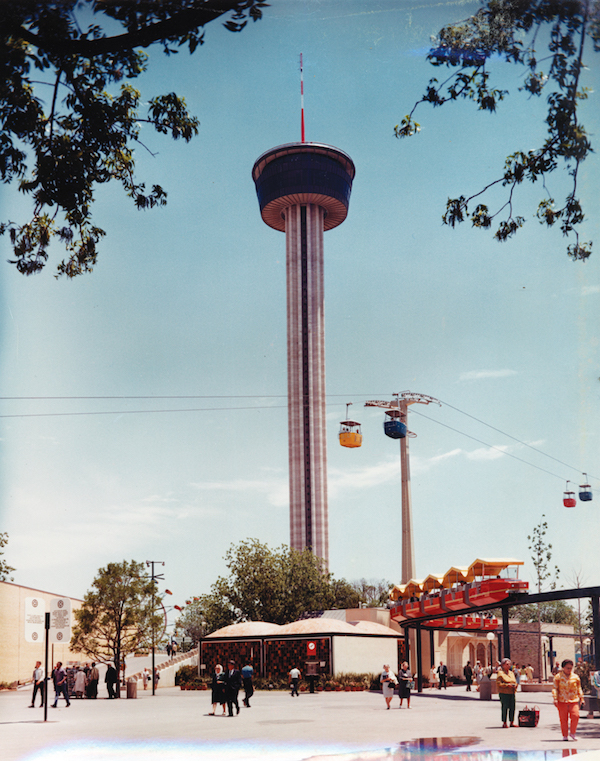 This year is the 50th anniversary of HemisFair, the world’s fair that lit up downtown San Antonio from April 6 through October 6, 1968. I worked for the fair from the summer of 1966 to the summer of 1968. I had a great deal of fun and I also discovered my life’s profession.

In 1966 I was a 26-year old graduate school drop-out, trying to scrape together a living as a free-lance writer in Austin. My friend Sherry Wagner called me one day from San Antonio and said, “Lonn, they are organizing a world’s fair in San Antonio and they are paying writers $10,000 a year. Get down here!” I got down there and was told to submit a sample of my writing to the head of the fair’s architecture and design department, Allison Peery. I stayed up all night in my hotel room and used a borrowed typewriter to write a 20-page description of an exhibit pavilion that would take the visitor inside the mind of Christopher Columbus. It included a huge reconstruction of the Ptolemaic system of the universe and an explanation of why Columbus had miscalculated the circumference of the earth. I was pretty proud of it. I took it to Peery’s office the next morning. He read it and said, “That’s pretty good but you need to learn how to spell “pavilion.” I had spelled it with two l’s all the way through the document. Peery hired me anyway, and I have never again written anything without a dictionary at my side.

My first job at the fair was to write proposals for commercial exhibits that would address the theme of the fair. A world’s fair is basically a real estate operation: the fair’s sales department is trying to sell exhibit space to commercial exhibitors. But there is a catch. All world’s fairs have a theme assigned by the Bureau of International Expositions, the international organization in Geneva that licenses world’s fairs, and all of the exhibits in a world’s fair must address that theme. The theme of HemisFair was the Confluence of Cultures in the Americas. It worked like this: the sales department would decide to make a pitch to Goodyear Tires. They would come to me and say that they wanted a ten-page proposal for a Goodyear Tire exhibit that would address the theme of the fair. I would drum up an essay about how the Mayas invented rubber and how the Aztecs had used it in their ball games, and how rubber was the most important gift of the New World to the Old. The sales department would take the proposal to Goodyear and Goodyear would say, “Fellows, we’re not selling Mayans or Aztecs and we’re not giving gifts to anybody. We are selling tires and we want an exhibit with tires in it.” The sales department would bring the proposal back to me and say, “Put some tires in it,” and I would write in a Mayan pyramid made of Goodyear tires. It was interesting work.

Eventually all of the commercial exhibit space was sold except for a 30,000 square-foot hall in the new convention center on the fairgrounds that no one wanted to attempt to fill. The fair management decided to install a “theme exhibit” in it, to be paid for by the fair, and assigned me to write the script for it. If I had possessed an ounce of common sense or ten minutes’ worth of experience in doing exhibits I would have declined because 30,000 square feet is a huge amount of space — even at the Smithsonian most exhibits are 4,000 or 5,000 square feet. But I was in my 20s and thought I could do anything. I sat down and wrote a script about how both Europeans and the native peoples of the Americas had made use of the heavens. I worked with an exhibit designer from New York who was one of the most remarkable people I have ever known. His name was Frazier Dougherty. He was twice my age, a big man with an imposing head covered with blond curls turning grey. He looked like a Greek god that had enjoyed too many good dinners. He had started his design career in the 1930s in Raymond Loewy’s office and had designed the interior of the spaceship in Stanley Kubrick’s film 2001. He was married to a New York heiress whose fortune permitted him to do pretty much what he wanted to do. He was totally uninhibited and had been written up in Esquire for paying a fine of $10,000 for several hundred parking tickets and at the same time submitting a list of 25 ways that the Borough of Manhattan could improve parking.

Frazier taught me how to put an exhibit together. We divided the 30,000 square feet up into sections by hanging black canvas from the ceiling, placing a striking image or object at the end of each section to lead visitors toward it. We had a lot of overhead screens with images projected on them and about 60 slide projectors placed on catwalks below the ceiling. The projectors got clogged with dust and their bulbs burned out regularly and we had to hire a full-time audio-visual specialist, a totally irreverent fellow from California, to keep them running for the six months that the exhibit was up. The climax of the exhibit was an 18-foot white cube that contained a theater where visitors sat on a carpeted floor and watched a 6-minute film about the benefits of space exploration. Our audio-visual specialist made two sound tracks for the film, one narrated by a NASA scientist and one that he narrated himself in the persona of a mad scientist with a heavy German accent who got increasingly excited as the film progressed. Of course when we previewed the film for HemisFair officials it was the mad scientist sound track that they heard. We had to call them back for a re-run. I have never known whether that was an accident or not.

Working with Frazier I discovered that I had a talent for working with designers to create three-dimensional learning experiences in museums, and that is what I have done the rest of my life. So thank you, HemisFair and thank you, Frazier Dougherty, for showing me what my life’s calling was.

Lonn Taylor is a writer and historian who lives in Fort Davis. Taylor reads his Rambling Boy column on KRTS Marfa Public Radio every Friday at 11am and every Monday at 7pm.