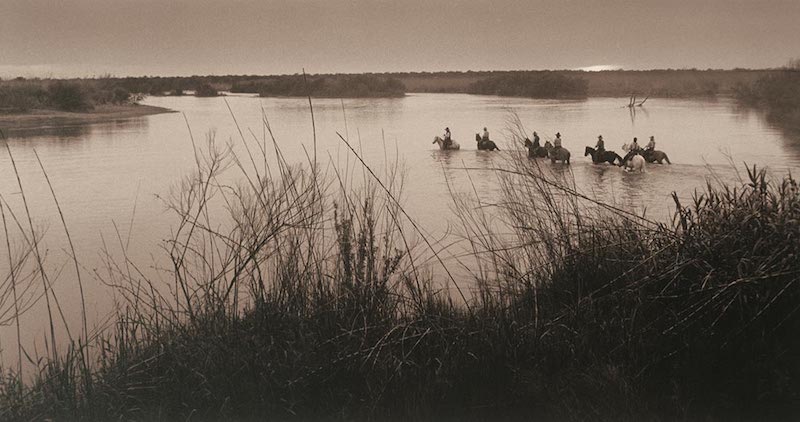 I have been musing recently about a long-lasting Texas phenomenon: the continuing popularity of Larry McMurtry’s 1985 novel Lonesome Dove. My musings were occasioned by a fine photographic exhibit that has been on display at the Jeff Davis County Library for the past month, 55 photographs taken by screenwriter and executive producer Bill Wittliff during the 1988 filming of the television mini-series derived from the novel. It is a fine exhibit and the photographs have a haunting, timeless quality about them. They could have been taken in the 1880s by Charles Kirkland or Andrew A. Forbes or any of the other photographers who recorded the great cattle drives north from Texas in those years. In fact they were taken 30 years ago and are from a book by Wittliff entitled A Book of Photographs from the Making of Lonesome Dove, published by the University of Texas Press in 2007. That is a very long shelf life for something as ephemeral as a television program.

Since 1985, 2 and a half million copies of the novel have been  printed, and 30 years after it was made you can still order the DVD of the miniseries from Amazon. Lonesome Dove made a huge impression on the Texas psyche. People name dogs and cats and horses and even children after its heroes, Gus McCrae and Woodrow Call. John Spong, who wrote about the phenomenon in Texas Monthly in July 2010, claimed that he knew of someone who named a daughter Gus after McCrae. There was a fellow in Fort Davis a few years ago who drove around in a pickup with the words Hat Creek Cattle Company, the name of McCrae’s and Call’s fictional ranch, painted on the doors, and another fellow who had a short-lived restaurant here called the Dry Bean Café. There is a hamburger chain in central Texas called the Hat Creek Cattle Company. People in the Hill Country hang signs reading “We Don’t Rent Pigs” on their ranch gates. Spong says this is because Texans “turn to Lonesome Dove for definition, for heroes who look and talk like them, who address life in a way they wish they could… It’s our Gone With the Wind. It’s the way we want to see ourselves.”

The novel has a strange history. In 1971, after director Peter Bogdanovich and McMurtry had finished shooting The Last Picture Show, Bogdanovich suggested to McMurtry that they collaborate on a western with John Wayne, Jimmy Stewart, and Henry Fonda playing the lead parts. McMurtry wrote a screenplay about aging cowboys and the end of the Old West which he called “Streets of Laredo” (he later used that title for a novel) and Bogdanovich took it to Columbia Pictures, where it was favorably received, but John Wayne hated it, so it languished on the shelf at Columbia for 12 years. McMurtry eventually bought the rights back from Columbia for $35,000 and spent a year or so turning into a novel, which he called Lonesome Dove. He got the title from a bus with the words Lonesome Dove Baptist Church painted on the sides that he saw while he was having dinner at a steak house in the little town of Ponder in Denton County. He sent the manuscript to his publishers in the fall of 1984 and the book was published the next year.

The truly odd thing is that in October 1981 McMurtry published an essay entitled “Ever a Bridegroom: Reflections on the Failure of Texas Literature” in the Texas Observer, excoriating his fellow Texas authors for writing about rural life, cowboys, and small towns when the majority of people in Texas were now urban dwellers. McMurtry started by blasting away at J. Frank Dobie and Katherine Anne Porter and went on to machine-gun most of his contemporaries for writing what he called “an endless stream of . . . Country and Western literature.” He was particularly hard on the folks he grouped together as “the journalists,” Edwin “Bud” Shrake, Dan Jenkins, and Gary Cartwright, of whom he said that the techniques of sports writing had ruined their novelistic styles. He praised a few of his contemporaries, especially Terry Southern, Max Crawford, James Crumley, John Irsfeld, and poet Vassar Miller, and he closed by saying “Until Texas writers are willing to work harder, inform themselves more broadly, and stop looking backwards, we won’t have a literature of any interest.” Then he went on to write Lonesome Dove, and followed that with two sequels and a “prequel” to Lonesome Dove, all set in the 19th-century West and none as good as Lonesome Dove.

McMurtry had little to do with the filming of the miniseries, which featured Robert Duvall and Tommy Lee Jones as McCrae and Call — in fact McMurtry is on record as saying he has never watched it all the way through. The miniseries was the brainchild of a television producer named Suzanne de Passe, who met McMurtry at a Tucson restaurant in 1985, read the galley proofs of the novel, and paid McMurtry $50,000 to purchase the film rights for her production company, Motown. She hired Bill Wittliff, an Austin publisher, photographer, and screen writer to turn the novel into a film script and secured $16 million in financial backing from CBS.

Wittliff became co-executive producer with de Passe and they both held various CBS executives’ hands while the film was shot.

Wittliff likes to tell about a meeting in which the CBS people told them that the cattle were going to cost too much money and that they would have to rewrite the script to eliminate the cattle drive. But one of the CBS men had an idea: “What if they start the drive and right away there’s this storm and the cattle get scattered, and you have Call say, ‘Let’s just keep  going,’ and you have all those guys going to Montana, doing all that stuff, but you don’t have to pay for the cattle.”  Wittliff countered, “Why don’t we just forget the cattle and get a herd of Angora goats? They can be the first guys to drive a herd of Angora goats to Montana.” One of the CBS men snapped his fingers and said, “Yeah! Goats!” and Witliff said, “No, that’s a joke.” Fortunately the cattle stayed in, the miniseries got made, and it became the best-selling Western DVD of all time.

Lonn Taylor is a writer and historian who lives in Fort Davis. Taylor reads his Rambling Boy column on KRTS Marfa Public Radio every Friday at 11am and every Monday at 7pm.