The Rambling Boy: The Unluckiest Sculptor in the History of Texas? 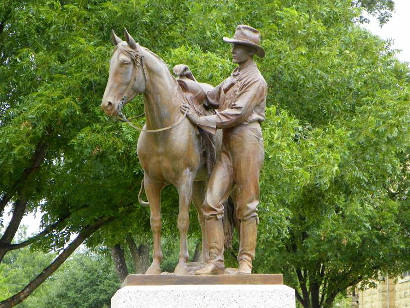 Coppini’s “Spirit of the Cowboy” in Ballinger, courtesy of Barclay Gibson.

Pompeo Coppini may be the unluckiest sculptor in the history of Texas. The Italian-born artist, a graduate of the Academia dell’Arte in Florence, first came to Texas in 1901 and worked here until his death in San Antonio in 1957. His heroic bronze figures are scattered all over the state, from his Terry’s Texas Rangers monument on the Capitol grounds in Austin to his John H. Reagan memorial in Palestine to his Spirit of the Texas Cowboy in Ballinger. His statue of Senator James Paul Clark of Arkansas is in the U.S. Capitol and his bust of General William Rufus (“Pecos Bill”) Shafter graces the main street of Galesburg, Michigan.

But Coppini saw one of his early works, a statue of George Washington commissioned by the North American community of Mexico City in 1910, toppled from its pedestal and dragged through the streets of Mexico City by an anti-American mob in 1914. His largest and most visible work, the Littlefield Fountain at the University of Texas at Austin, was first curtailed by the university’s Board of Regents, who removed two large obelisks from the design, and then dismembered by the university’s architect, Paul Cret, who distributed six statues intended for the fountain along the campus’s South Mall, turning them, Coppini complained, into “mere decorations.” The university has subsequently removed all six statues, consigning five of them to storage and moving the sixth, portraying Jefferson Davis, to the Briscoe Center for American History.

Coppini’s design for his other major work, the Alamo Cenotaph, was mucked about with in a similar fashion. Coppini envisioned a granite monument with a 60-foot high shaft rising from a 40-foot long base, which would support two of the symbolic female bronze figures that he specialized in, the Spirit of Sacrifice and the Spirit of Texas, as well as bronze figures of Travis, Bowie, Crockett, and Bonham, with the other defenders sculpted in bas-relief behind them. The committee that commissioned the monument decided that both the monument and the figures should be marble, a material that Coppini felt would not hold up well in the climate. It has not, and the City of San Antonio is proposing to dismantle the monument for conservation and relocate it to another site.

Not everyone liked Coppini’s work. When he received the commission for the Terry’s Texas Ranger statue in 1905, the German-born Austin sculptor Elisabet Ney, who had assumed that the commission would come to her, wrote to the Austin Statesman, “Alas! It seems that the word Italian stands by most people here in Texas for art. It is a great pity that Texas can again be duped.” J. Frank Dobie was Coppini’s severest critic. He hated the Littlefield Fountain and during World War II suggested that the University of Texas should contribute it to the national scrap metal drive. When the Alamo Cenotaph was dedicated, Dobie wrote that it looked like a grain elevator and that Coppini had sculpted Travis, Crockett, Bowie, and Bonham in poses that made them look “as though they had come to the Alamo to have their pictures taken.”

After the 1900 Galveston storm, in which 6,000 people died, the city fathers of Galveston commissioned Coppini to create a monument to the victims. Coppini showed them a 10-foot high plaster cast of his proposed monument, depicting a grieving mother in the midst of the storm pressing an infant to her breast while a small child clings to her skirt. The committee thought that it was too heart-wrenching and rejected it. It was never cast in bronze. Coppini attempted to exhibit the plaster cast at the 1904 St. Louis World’s Fair , but somehow the crate that it was shipped to St. Louis in was misdirected and and the cast never made it into the main statuary exhibition hall.

In 1914 Coppini, hoping that his patron, Austin banker George W. Littlefield, a regent of the University of Texas, could persuade the university to create an art department and name Coppini as its head, donated the cast of the proposed Galveston monument to the university along with 23 other plaster casts of his work. Not only did the university not create the department for Coppini, they managed to lose all 24 plaster casts, which were in 20 crates. The collection was briefly exhibited in 1919 and no one has seen it since. During his lifetime Coppini frequently questioned the university about it and never received a satisfactory answer.

Two years ago Austin businessman John Bernardoni, whose great-grandfather died in the Galveston flood, set out to find the missing casts. His mission is to have the Galveston monument cast in bronze and erected in Galveston. He retained my friend Ralph Elder, a retired research librarian from the university’s Briscoe Center for American History, to search the university’s records to try to determine what happened to them. Elder came up with five possibilities: they could have been consumed in a fire that destroyed the Chemistry Building in 1927; they could have been sent to some other institution; they could have been turned over to a private individual; they could have simply deteriorated from mishandling and been disposed of; or they could still be in their crates somewhere in one of UT’s buildings. Bernardoni has seized on Elder’s last proposition and is currently engaged on a building-by-building search of the university’s off-campus J.J. Pickle Research Center, which comprises more than 100 buildings.

Coppini was unlucky even when he was lucky. One of his most moving and poignant works is his Spirit of the Cowboy on the courthouse square in Ballinger, which depicts a young cowboy standing affectionately by his horse. The cowboy is Charles Noyes, the only son of a wealthy local rancher, who was killed in a fall from his favorite horse. The statue was commissioned by Noyes’s grieving parents.  The commission came in 1919, a low point in Coppini’s career and in his finances. He intended to ask the Noyeses $25,000 for his work, but when he travelled to Ballinger to meet with them he was so moved by their grief and their modest style of living that he told Mr. Noyes that he would do it for $18,000. “I was prepared to pay twice that,” Noyes told him.

Texas novelist Stephen Harrigan was so intrigued by the Ballinger statue and the story behind it that he used it as the plot of a fine novel, Remember Ben Clayton.That novel may be Coppini’s greatest legacy to Texas.

Another important Coppini piece that you can see is “Queen of the Sea,” a bas-relief sculpture/fountain, that is 7′ tall by 13 1/2′ wide on the Bluff Balustrade in Corpus Christi. It was begun in 1914 and completed in 1918 as a part of the “City Beautiful Movement.”