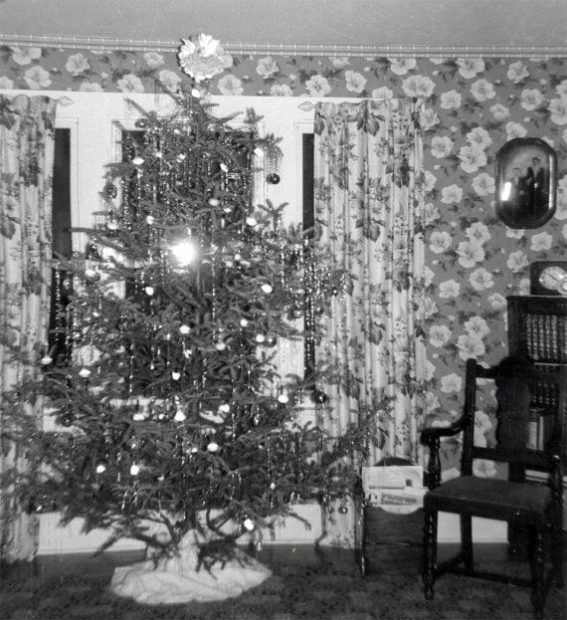 Our neighbors in Fort Davis think that we are unbelievers or worse because we do not cover our house with Christmas lights every year. One fellow down the street from us strings enough white lights on his house the day after Thanksgiving to make it resemble a beached cruise ship at night, and other houses bloom out in red and green and even blue luminescence as December 25 draws near. Our sole decoration is our Christmas tree, a Fraser fir which we order from a Christmas tree farm in North Carolina and set up in our living room picture window about December 20. We decorate it with lights and ornaments on Christmas Eve, and leave it up until Epiphany, January 6, so that for those 12 days any neighbors who glance into that window — and it is a very large window — will be reassured that we do indeed celebrate Christmas.

Scholars have traced the origin of the Christmas tree to the trees decorated with sweets, nuts, apples, and dates to be enjoyed by apprentices that were placed in guildhalls in Northern Germany and the Baltic countries at Christmas in the late 1400s. These in turn probably had their origin in some pre-Christian custom involving evergreen trees. The Christmas tree custom had become rooted in Germany by the 1700s, and the first Christmas trees in America are all associated with Germans. Firsts are always dangerous, and wise historians avoid them like the plague, but I will record that Windsor Locks, Connecticut, claims that a Hessian soldier put one up in 1777 while he was a prisoner in the Noden-Reed House there, and their annual Christmas celebration includes a First Tree ceremony. Easton, Pennsylvania, discounts this story as a myth and claims that German settlers there erected the First Tree in 1816. Lancaster, Pennsylvania, about 80 miles down the road from Easton, disputes this claim as undocumented and puts forth an 1821 diary entry by Lancaster resident Matthew Zahm describing a Christmas tree to support their First Tree claim.

The first tree that I can remember was the one my family had at Christmas of 1942, shortly before my third birthday. That was the last year that my parents decorated the tree with metallic icicles, little strips of glittering metal that they drooped over the branches after hanging the ornaments. The next year, 1943, whatever material those icicles were made from was devoted to the war effort, and my mother whipped up some very realistic snow from soap flakes which she ladled onto the branches from a saucepan.  Our ornaments were a few pre-war glass spheres, which my mother referred to as sugar plums. We made strings of popcorn to supplement the snow. I have a photograph of our 1943 tree, which looks a little sparse despite the popcorn. The next year we added chains made of rings of colored construction paper, and that filled things out a little.

Our trees during the years that we lived in the Philippines were always pines sent to us by friends in Baguio, in the pine-covered mountains of northern Luzon. Most people in the Philippines did not have Christmas trees, but the American and European colonies in Manila provided a market for Baguio pines, as they were called. The standard Christmas decorations in most Filipino homes were beautiful star-shaped bamboo-and-paper lanterns called paroles, from the Spanish word for lantern, farol, and we had several of those hanging from our rafters each Christmas, too.

Since all of our Christmas decorations had been left behind when we moved to Manila, our Baguio pines were decorated with locally available materials. In 1947 our tree was festooned with strips of the metallic tape pilots tossed out of airplane cockpits to foil enemy radar. The army had stockpiled hundreds of thousands of coils of these in Manila in anticipation of the invasion of Japan, and they were sold in every market. Another year our ornaments were candy canes, always popular in Manila grocery stores.

When I lived in Round Top in the 1970s, some of my Texas-German neighbors had traditional German trees, lit by candles in little metal holders which clipped to the branches. The candles were only lit on Christmas Eve, when the family opened their presents, but I thought it was a dangerous practice and never attempted it.

The first year that my future wife, Dedie, and I were together, we decided to go to Santa Fe for Christmas. We discussed whether or not to have a Christmas tree in the apartment we had just started sharing in Washington, D.C. I said that there was no point in having one, since we would not be there for Christmas, and I thought that Dedie had agreed with me. I came home from work a few days before we were to leave to find a magnificent fully-decorated, six-foot high spruce in the living room. Dedie had bought it in a lot and dragged it five blocks home by herself. That was when I learned that when Dedie is determined to do something she doesn’t argue about it, she just does it.

We had a wonderful time that Christmas. Our hotel had a beautiful Christmas tree decorated with lights shaped like red chiles in the lobby. On Christmas Eve we went to midnight mass at St. Francis Cathedral, where mass has been celebrated every Christmas Eve since 1610, and walked back to our hotel through falling snow. On Christmas Day we went to a turtle dance at San Juan Pueblo and then had a margarita-laced Christmas dinner with some Santa Fe artist friends, who had a metal Christmas tree.

When we finally got back to Washington the first thing we saw when the taxi pulled up to our apartment building was a charred Christmas tree lying in the flower bed at the base of the building and a broken window in the first-floor apartment directly above it. We knew exactly what had happened. That apartment belonged to a Swedish couple who, before we left, had invited us to a traditional Swedish Christmas Eve party, with a tree lit by candles and plenty of glog, Swedish punch. We had missed the party, the fire, and all of the excitement. We went upstairs to our apartment and were welcomed by our own beautiful tree, covered with ornaments and aglow with tiny lights. I was so glad that Dedie had disagreed with me about a tree. Nothing makes a house feel like Christmas more than a Christmas tree.

YuleTube: Ghosts of Christmas TV Past

Great story – brought back lots of good memories (I am 80).

Beautiful story like only Lonn could tell. Miss that man, but thanks Glasstire for posting this!! Merry Christmas!