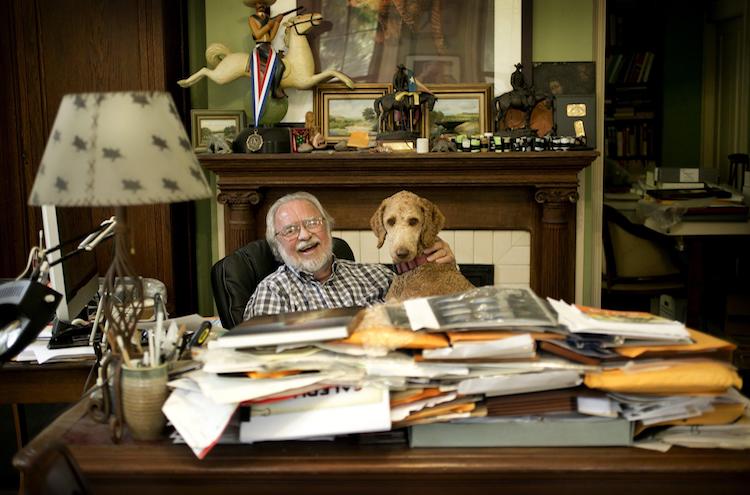 Bill Wittliff in his study.

Bill Wittliff was one of the most talented and creative people I have ever known. For starters, he was the only person I have ever met who got through the University of Texas School of Journalism without taking a typing course. Whenever he entered the Journalism Building he wore his arm in a sling. When he died of a heart attack in Austin on June 9 he still did not know how to use a typewriter. The man who wrote three novels and innumerable screenplays, including Lonesome Dove, wrote everything in what his wife, Sally, described as “illegible longhand.”

When I first met Bill and Sally in Austin in 1964, Bill had just quit his job at S.M.U. Press and he and Sally had started a small publishing company of their own, Encino Press. Bill had considerable talent as a book designer and in the 18 years of its existence Encino Press published some of the most beautiful books ever produced in Texas. My favorite is The Narrative of Robert Hancock Hunter, a slim (34 pages) volume bound in tan boards, with Wittliff’s full-face, pen-and-ink portrait of Hunter, an Austin colonist and soldier in the Texas Revolution, on the front cover.

Wittliff appreciated Hancock’s narrative because it was a good story and Wittliff was a master storyteller. During World War II, Wittliff regaled his kindergarten classmates with tales of his father’s adventures as a Flying Tiger pilot, even though his father never left Texas. When he was in high school in Blanco he submitted a Most Unforgettable Character I’ve Ever Known piece to the Reader’s Digest. It was rejected, which was fortunate, because it was about Lyndon Johnson, whom Wittliff had never met, much less known. He made it all up.

Wittliff started writing film screenplays in the 1970s. His first success was a TV movie, Thaddeus Rose and Eddie (1978), starring Johnny Cash and his wife, June Carter. He followed this in 1979 with The Black Stallion, based on Walter Farley’s 1941 novel, and a long string of other hits, including not only Lonesome Dove but Honeysuckle Rose, Raggedy Man (based on his mother’s reminiscences of working as a telephone operator in Edna, Texas), and The Perfect Storm. He became a mentor to dozens of young Texas screenwriters and always had time to visit with them when they dropped by his office in an old house on Austin’s Baylor Street, an office that Austin writer Skip Hollandsworth once described as looking like “a combination museum and rent-by-the-month storage unit.” The last time I visited Wittliff there, much of the space was taken up by a life-sized wooden horse, complete with charro saddle, that had been used by a Mexican street photographer.

Photography was one of Wittliff’s passions. In 1972 he was invited to visit a ranch in northern Mexico where vaqueros still worked cattle on horseback. The photographs that he made on that trip were published by the Institute of Texan Cultures in a book called Vaquero: The Genesis of the Texas Cowboy. This was followed by several other books of photographs, the most eccentric of which is Boystown: La Zona de Tolerencia, published in 2000, photographs of prostitutes and their clients in a border town bawdy house. The photographs were not taken by Wittliff but by Mexican photographers who made them as souvenirs for the clients. Wittliff bought about 7,000 negatives from the photographers and spent years cleaning and printing them. “Every time I looked at those photos,” he said, “I saw stories that needed to be told and that needed to be preserved.”

The preservation of stories was the overriding theme of Wittliff’s life.

In 1985 he received a telephone call from J. Frank Dobie’s former secretary. Dobie’s estate was being sold and she wanted to know if Wittliff wanted to buy Dobie’s desk. He did, and when he drove to the Dobie house to get it he noticed about 30 cardboard boxes full of papers. He bought those, too. They turned out to be Dobie’s papers that had not gone to the University of Texas after his death. They included a great deal of correspondence and a diary he had kept as a graduate student at Columbia University that Dobie himself thought had been destroyed. Wittliff and his wife, Sally, gave these papers to Texas State University, and they became the foundation of the Wittliff Southwestern Writers Collection, which now occupies the entire seventh floor of the Albert B. Alkek Library Building.

Wittliff was a compulsive archivist himself. When he was 15 he and two high school buddies drove to San Antonio to hear an Elvis Presley concert. As Sarah Bird tells the story, the hall was sold out, and they decided to sneak in. Wittliff climbed a tree behind the building and jumped to a window ledge that opened into Elvis’s dressing room. He explained to a surprised Elvis that he and two friends had driven from Blanco to hear him but could not get into the hall. Elvis tore a paper towel from the dispenser over the washbasin and wrote on it, “To the doorkeeper. Let these 3 fellows in. I know them. Thanks. Elvis Presley.” That paper towel is now in the Wittliff Collection.

My fondest memory of Bill is of sitting in the lobby of the Gage Hotel in Marathon with him on the afternoon before some Lonesome Dove event that J.P. Bryan was producing. He was telling stories about the difficulties of filmmaking. I told him that I had seen The Black Stallion when it came out, and that I loved the shipwreck scene, where the boy and the horse swim through the surf to safety. Bill said, “You know, we ran through six horses shooting that scene. The black stallion we started with proved to be totally unmanageable, so the film company sent us six other older horses, but they were all different colors, so they dyed them all black.

“When they got in the water the dye started coming off. We were on our sixth horse when the director decided he had the shot he wanted.” I mentioned that I remembered a lot of underwater shots from that scene and Bill said, “That’s because the director and the cameraman hated each other. The director was always yelling at the cameraman. The cameraman was a scuba diver, and he figured that if he was underwater he couldn’t hear the director. So he tried to stay underwater as much as possible.”

I know that Bill wrote those stories down and that they are in the Wittliff Archives. There was nothing ephemeral about Bill Wittliff.