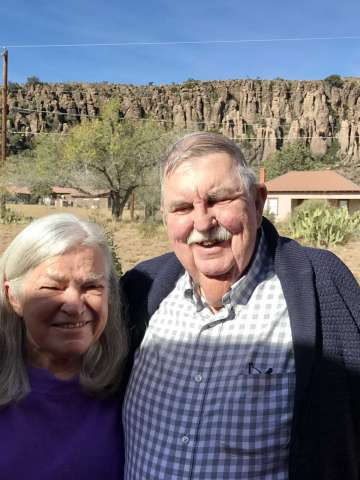 Lonn Taylor — a prolific writer and also a historian and curator for the Smithsonian’s National Museum of American History who retired with his wife  Dedie to Fort Davis in 2002 — died last night at home. He worked for the Smithsonian for 20 years, and authored a number of books (most recently, in 2018, Marfa for the Perplexed). He had a weekly column and podcast called “The Rambling Boy” with the newspaper The Big Bend Sentinel and Marfa Public Radio, in which he covered all manner of esoteric Texan-Americana and history. Glasstire occasionally republished these columns with the blessing of Taylor and the Sentinel (most recently, on June 19, Taylor’s column which paid tribute to his friend, the great Bill Wittliff).

In March, Taylor penned a powerful argument and plea to head off a proposed giant music festival, the C3 Festival, which was planned to launch just outside of Marfa next year:

“Marfa is facing a David-and-Goliath battle of unprecedented importance to the entire Big Bend … it seems to me that C3’s proposal is a crass attempt by a group of Austin promoters who have achieved a toehold in Marfa to exploit the town’s name and its popularity for their own profit, killing the goose that laid the golden egg in the process. Any sensible person knows that you cannot put 6,000 people in a pasture for three days, give them alcohol, and expect them to behave responsibly. Any sensible person knows that Marfa’s fragile public safety infrastructure cannot support a gathering that is more than twice the size of Marfa’s total population.”

Taylor was born in South Carolina, and came to Texas in 1962 from New York City to attend a summer class in Austin. According to an interview he gave to Texas Highways last year, Taylor “happened to move into a garage apartment next door to the legendary rock singer [Janis Joplin], whose late-night jam sessions with her ‘seven or eight’ musician roommates proved more compelling than Taylor’s coursework. ‘About the second week, I quit going to class,’ he confesses. ‘I never went back to New York. I never got a Ph.D.'”

Taylor spent the majority of his career in Washington, D.C., but retired to Fort Davis when he came back to Texas for a visit. In the Texas Highways interview, he says: “I attended a conference at Sul Ross in Alpine. It was an absolutely beautiful spring day. I was driving back to the airport in Midland when I stopped in the Fort Davis Drugstore to have breakfast. They still had payphones then, so I called Dedie and said, ‘Dedie, quit your job. Sell the apartment. Get down here! This is the place.'”

In a recent Letter from the Editor, Glasstire’s Christina Rees wrote: “Lonn Taylor is a state treasure, if not a national one … We adore both Lonn and his writing.”

Note: Marfa Public Radio, which you can livestream, will have more on the life of Lonn Taylor on Friday, June 28 at 11 a.m.

Here is the link to Taylor’s “Rambling Boy” columns reprinted by Glasstire.

Great tribute to Lonn Taylor. I only knew for 2 years but we had wonderful email conversations about Texas art, culture, and history. I will miss his Rambling Boy.

Beautiful obituary, thank you! It’s only today I hear of Lonn Taylor’s death. I never met him, but his characteristic voice accompanied me on the local radio “of a wide range” when vagabondizing in the Far West Texas, be on motorcycle, be in a car. I bought one of his books in Marfa’s marvelous bookstore, never got to read his “Rambling Boy” – today I do. Lorenz, Zurich, Switzerland.