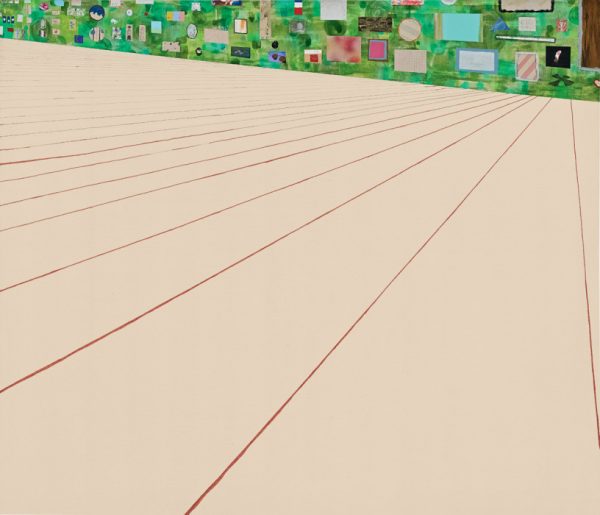 In March I saw Artemisia Gentileschi’s Self-Portrait as the Allegory of Painting at the Royal Academy in London, a painting that is often included in art history surveys as one of the few great 17th-century paintings made by a woman. While this may seem to reduce Gentileschi to a token, she is not. She rejected the kind of static self-portrait that meets the viewer’s gaze, and instead painted herself in the act of painting, arranging the composition of her body to turn a diagonal into a curve that draws the viewer into her space. This use of space reminded me of Laura Owens’ 2016 show at Sadie Coles HQ in London. Owens often uses cartoonish imagery, text, reproduced gestures imported from Corel Painter, trompe-l’oeil drop shadows, impasto brushwork, and collaged three-dimensional objects to draw her viewer into manipulated, ambiguous depths. Like Gentileschi, Owens bends her pictorial spaces, but she takes it further by controlling the actual physical space of the gallery. Some walls of Coles’ gallery were densely hung with both large and small works; some paintings were hung on temporary walls in the middle of the room, and some walls were empty or sparsely hung with no apparent concern for the viewers’ eye level. 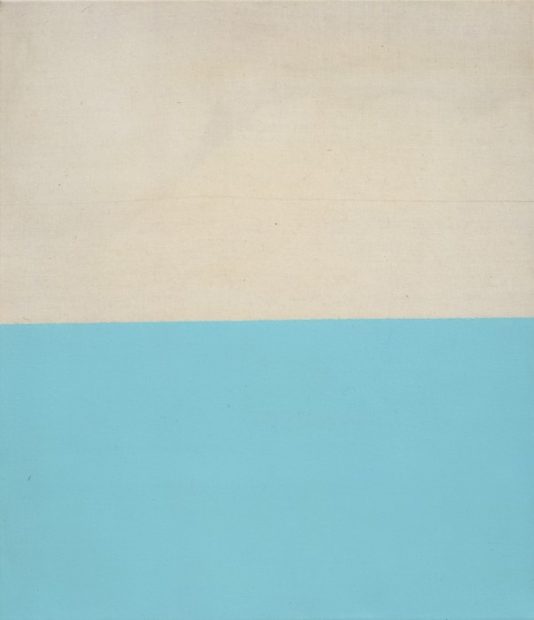 Recently, I saw Laura Owens’ mid-career retrospective at the Dallas Museum of Art. The exhibition is a partial recreation of her recent show at the Whitney Museum of Art, and it highlights some but not all aspects of Owens’ abiding concern with spatial manipulation. The show starts in the Hoffman galleries with Untitled (1994).The work is an early painting that initially evokes minimalism, with one half of the canvas painted blue and the other left raw. According to Owens: “The orientation of this painting is determined by whoever installs it. What looks like a non-objective composition is revealed through this anecdote to also be representational. Its meaning is determined subjectively by the viewer/installer. The blue can go on the bottom or on the top, making it a seascape or desertscape”. The piece blurs the lines between flatness and depth, surface and referential illusion.

I would not have been aware of the various installation possibilities of Untitled (1994) had I not read the show’s catalog. But I had: If one is so inclined, one can sit on one of Owens’ custom-made benches strewn with catalogs and placed throughout the galleries, and find many interesting tidbits. For instance, I read an email from Owens’ assistant to the staff at Sadie Coles HQ wherein she asked the gallery “to build three non-adjoining walls” whose dimensions had to follow (specific) guidelines (a feature I particularly remembered from that show). These instructions indicate that Owens consciously manipulates her spaces, yet the installation in Dallas is relatively traditional, with most the work in the show installed at eye level. 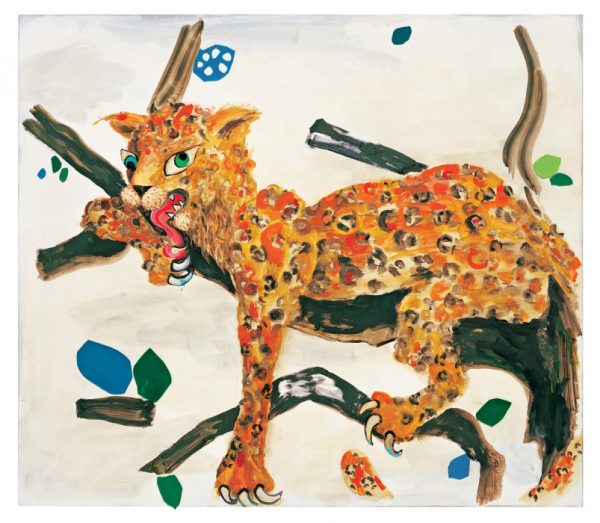 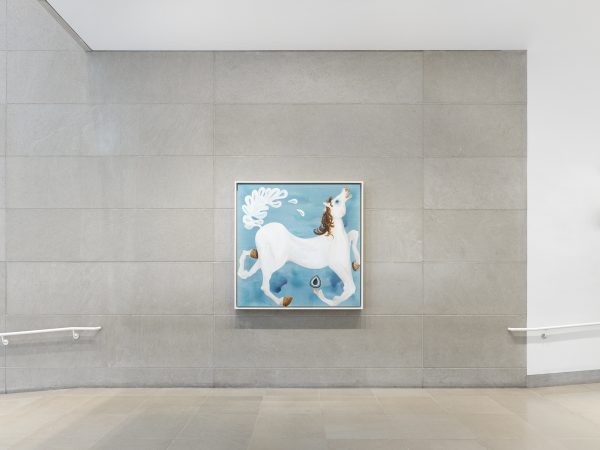 Installation shot at the DMA

The DMA show occupies all of the Hoffman Galleries, which are divided into seven spaces. Some pieces spill out into the central hallway, and a portion of the show occupies one of the quadrant galleries in the central part of the museum. This disparate presentation of Owens’ work seems to negate her manipulation of architectural space that was so notable in the 2016 show. There are several groupings that do play on the physical space of individual rooms, the most successful being the recreation of the installation of two diptychs from a 1999 exhibition. According to the wall label, the works’ success derives from Owens forcing “viewers to encounter its parts in succession, heightening one’s sense of time and space as essential to the experience of art.” But this element seems to be missing from the rest of the show in Dallas.

I also noticed the absence of the handmade books that Owens often includes in her exhibitions. The catalogs and benches partially satisfied that longing; every “copy” of the catalog is unique, as each one has a different, individually printed cover. The catalog is a wunderkammer of printed matter, filled with letters, photographs, interviews, handwritten notes, and other ephemera. Reproductions of Owens’ works in the show are often relegated to background imagery, or mere copies of low-quality photographs. The catalog is the collaborative brainchild of Owens, designer Tiffany Malatooki, and researcher Asha Schechter. Scott Rothkopf, curator of the Whitney exhibition and editor of the catalog, explains his desire to expose the “woman behind the curtain,” rather produce a traditional catalog of plates and text. 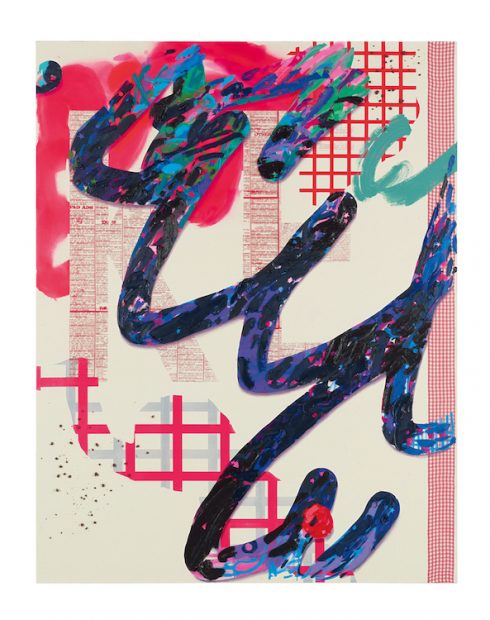 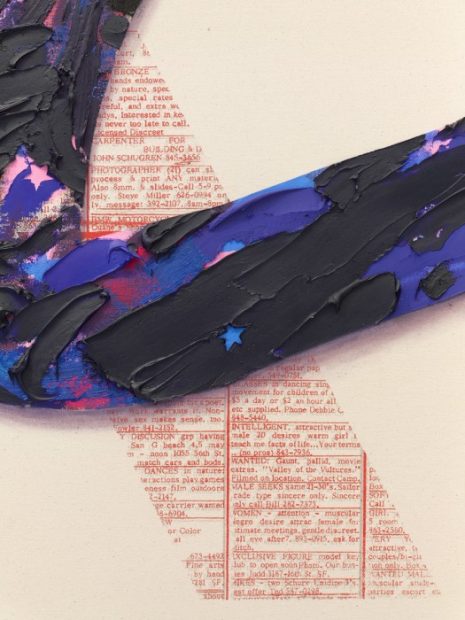 The book focuses on one of Owens’ strengths as a painter — her use of mixed media. It explains her technical processes, which the DMA show best exemplifies with the installation of selected works from her Pavement Karaoke show of 2012 at Sadie Coles HQ. This body of work comprises seven paintings inspired by her love, natch, of karaoke and the band Pavement. The original compositions evolved through Owens’ complicated process of editing and layering, which includes photography, digital-image manipulation, printing, painting, and collage. The resulting works are made up of several kinds of paint, resin, and collaged elements like fabric, thread, and pumice stones.

These paintings exemplify Owens’ playful use of pictorial space. Major compositional elements often begin as calligraphic marks made with a computer that she transfers to a canvas. The shapes start flat, but she fills them with thick, gestural applications of paint. They may appear illusionistic, with screen-printed or airbrushed drop shadows. Her use of serigraphy becomes another type of brush stroke, and allows Owens to use text as textural elements in her paintings. Owens remains keenly aware of a hierarchy of materials, however. She often employ a large arsenal of techniques and media, but painting always comes out on top. 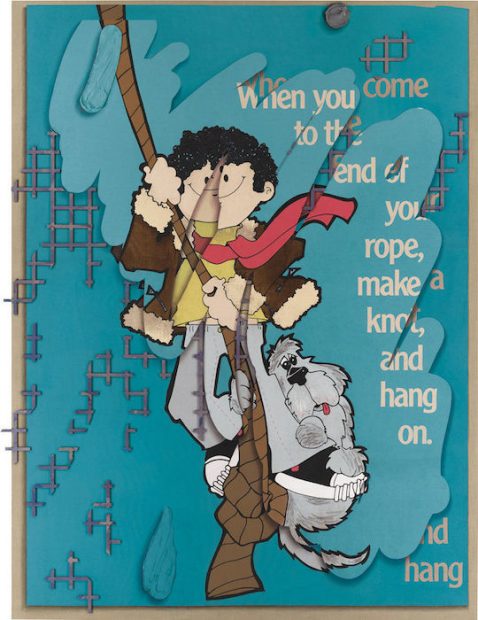 In the Dallas show, the piece that best qualifies Owens as a champion of painting is Untitled (2014), originally displayed in the 2014 Whitney Biennial. This painting quotes an image from an inspirational poster that depicts a goofy boy and his dog, clinging to the end of a rope, with text that reads: “When you come to the end of your rope, make a knot, and hang on.” Owens recreated the image on a grand scale, and utilized digital processes to fracture the cartoon imagery. She expanded her mastery of material and went for broke. According to one of her assistants, “We went from using four screens to about thirty” on the work. It makes for a long list of media: ink, silkscreen ink, vinyl paint, acrylic, oil, pastel, paper, wood, solvent transfers, stickers, handmade paper, thread board, and glue on linen and polyester, five parts. The “five parts” on this list seems confusing because Untitled (2014) appears to be one canvas, but only one can be seen, with four other paintings arranged behind it, like Russian nesting dolls inside the stretchers. The inclusion of elements that cannot be seen by the viewer reveals the concept-heavy influence of the faculty during her graduate studies at CalArts. Owens often includes seemingly arbitrary elements into her work, like a hidden speaker, bicycle wheels, or even sound bites on a website. These work like a conceptual cherry on top of her work, adding one more layer. In her Untitled (2014), the hidden components possibly refer to all the ideas that go into a work but are never visible. 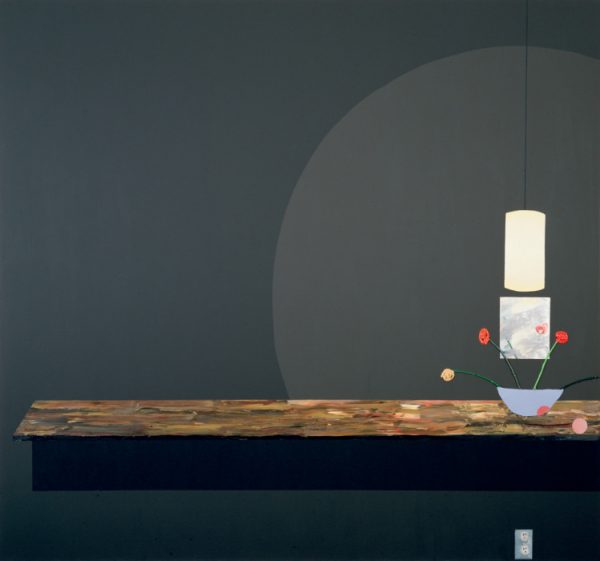 Gentileschi’s Self-Portrait as the Allegory of Painting also alludes to a painting we cannot see, thus creating another connection to Owens’ work. Both women excel in their field, but connecting them because of their gender is a red herring. Gentileschi’s story is often told as one of tragedy and resistance. In her Self-Portrait, Gentileschi wore a gold chain, which is a symbol for the cannon of painting. She incorporated this in her painting as if to say that she deserved to be considered, which she should be, and not because she was woman, but because she was a good painter. 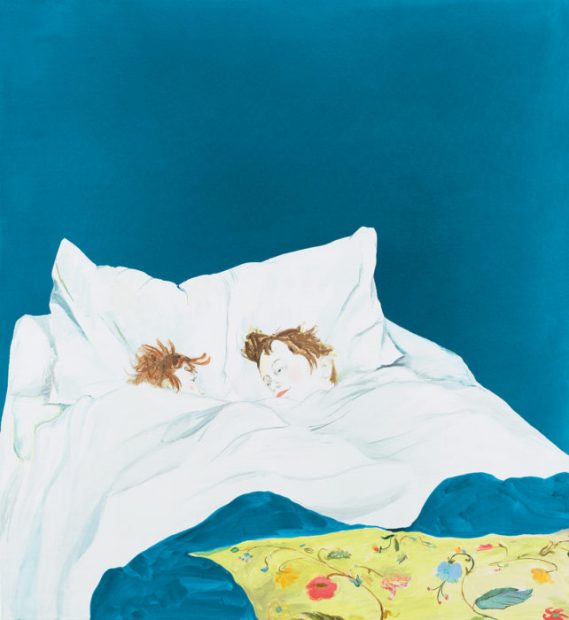 Laura Owens is no different. She too deserves to be included in the canon of painting because she, like Gentileschi, took the developments of previous painters and blended them into something new, but devoid of many of the macho conventions of previous generations. Owens manipulates space, drawing the viewer into her layered and complex world, much like the one we live in. Her show at the Dallas Museum of Art does something different. It becomes a playground where figuration and abstraction frolic. Complex media choices play hide and seek. Conflicting elements hold hands and skip across the room. Laura Owens reminds us of the joy of painting, and that she has forged her own link in the chain of great painters.

Correction: An earlier version of this text mentions that the exhibition catalog is the brainchild of Scott Rothkopf. It is in fact a collaboration between Rothkopf, the artist, Tiffany Malatooki, and Asha Schechter.

I appreciate that this review places Owens in a historic context- will be required reading for any future painting courses I teach.