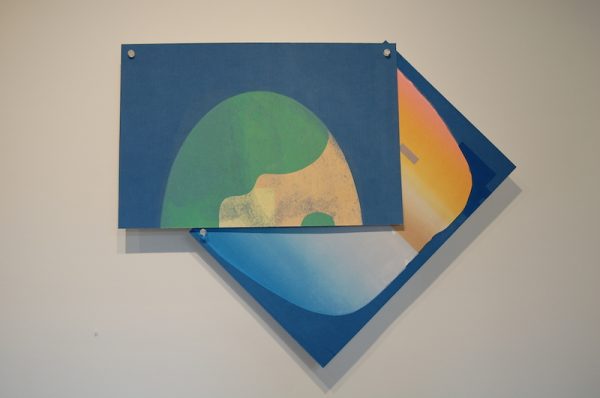 Even as someone who takes great pains to insulate myself from technology, it’s difficult to deny the seductive glow of a screen, or that of the collaborative work of Nick Butcher & Nadine Nakanishi. Their show Café Avatar, at grayDUCK in Austin through February 18th, marries the tactile practice of printmaking with the light, candy-store feel of the internet. This is a fitting aesthetic for a show that asks in its own literature, “As humanity enters a new graphic skin, how will we remember our physical selves… Where do our avatars hang out when not in use?”

Butcher and Nakanishi make up the Chicago-based print collaboration, Sonnenzimmer, which claims, “The graphic arts predate the siloed genres of fine and applied. We like to think of our work as finely applied graphics.”

This explicit blending of intentions can been seen in the grayDUCK show. While the work presented in Café Avatar is incredibly pretty, it also has a satisfying heft. It’s both playful and thoughtful. Attractive and off-putting. 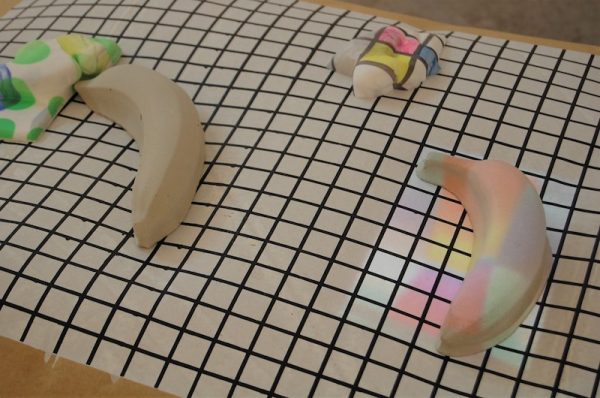 By way of example, a work titled Fruit Plane Starring Banana Concrete sits at the center of the room. It is a large, paper pillow, topped with a grid, two cement bananas, a few abstract shapes, and a projection of what seems to be a rolling rectangle of undulating color within a frame of slightly less-undulating color. Even when looking at other works in the show — perhaps especially then — the flicker of the small, rectangular projection suggests a constant flow of new text messages, posts, and updates. Were you washing the dishes? Were you doing your taxes? Were you looking away for even a moment? — it seems to ask. And just like the uninvited text, or status update, when you drop everything to look, it’s still just a cement banana on a paper bag.

The projection does transform the banana into an oddly alluring light show, so that when, for just a moment, the projection stops, one has the empty feeling of staring into the blackened screen of their phone, waiting for something to happen, or for someone to say hello. Outside the explicit thesis of the show, there is something indescribably pleasing about this laying of chaotic gestures over the rigid structure of a neat grid. This is perhaps a little dramatic, but isn’t that just… life? 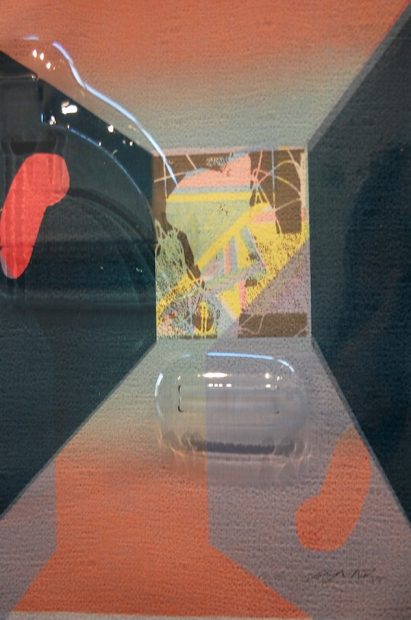 Close up of Studies in Matrix 3.8.

While the show is part of Print Austin, and is predominately composed of screen-printed materials, there are many interesting material choices that augment and distort the images. A series of nine different Studies in Matrix and Studies in Matrix Monoprint feature vacuum-molded plastic coverings which bend the images, cause glare, and cast a variety of shadows, some dot-like and pixilated, others irregular and abstract. I initially resented these plastic sheaths which challenge the viewer in their quest to view the work. And yet. The mere act of squinting and shifting to find a better angle and avoid the white streaks of glare which obscure the image felt comically familiar — it is so much like squinting into a device. These nine images are stunning puzzles which share elements and actual (printing) screens between them so that images shift and recur. Though these images are grouped in places and stand alone in others, as one moves between them a suspicion begins to grow — the feeling that I’ve seen this before. Each image suggests a sort of hallway where a Memphis Design-style collage of dreamy pinks and blues tetris together abstractly at the end of the corridor. The hallway has three variations. An elongated blob of color that I struggle to describe as anything other than a pink, fleshy, penis repeats in a few of the images. A set of ovals repeat. Even the palette implies a Wikipedia-type wormhole that one enters and swirls down into, like circling a drain. 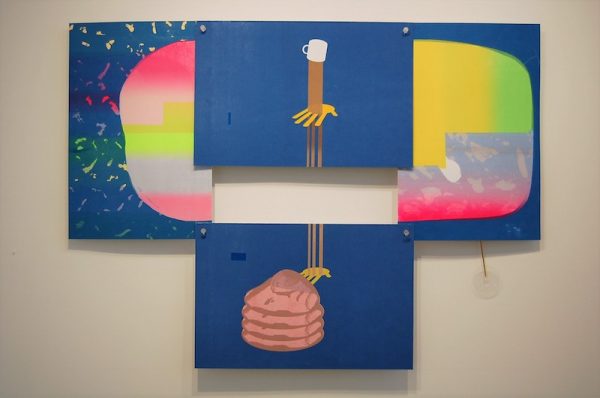 The largest image — “Knuckles” — has both the most explicit imagery and yet feels the most amorphous. A cup of coffee is poured over an open hand and rains onto a canvas below, where it hits another, identical hand. A stack of pink faces lie at the bottom of the image like sliced ham, or pancakes. The lower hand makes a sort of spatula, preparing to flip the top face off of the pile. Two vertical canvases are attached to the sides of this pair, making a confusing set of neon-gradient wings.

Am I thinking about it too hard? Not hard enough?

The pieces in this show feel more like portraits of our beloved technology than depictions of its landscape (perhaps least of all, however, the images with faces, which feel  more like representations of our technology’s machinery, duplicating, pixilating, and distorting either in or against our best interests). To labor over a physical portrait of our chintzy digital existence seems in keeping with the idea of a portrait, to my way of thinking. That is, it is not just to present the individual or object as noble or worthy of the effort, but to exult the values of the time and culture — be that the virtue of power, or poverty, or piety.

While the show asks where our avatars hang out when not in use — the café presented by this show, it is suggested — a more pressing question seems to be: What is the value we ascribe to our avatars? Is this show a collection of portraits of the portraits we present on our behalf, like ambassadors to the distant shores of other people’s electronic doorsteps? Perhaps.