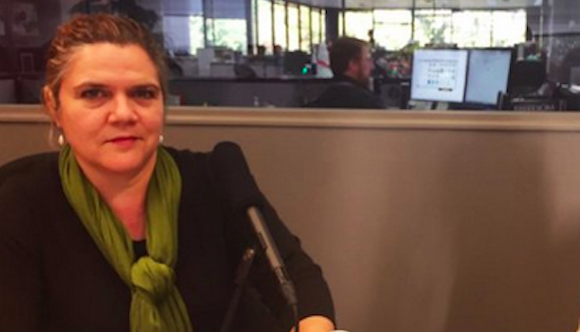 Austin has long pouted about its lack of arts coverage (as do many cities), but now Seth Orion Schwaiger of the Austin Chronicle (and Glasstire) really has a beef. He reports that the Austin American-Statesman, the city’s daily paper, is letting go of its full-time arts writer, Jeanne Claire van Ryzin, effective at the end of the year. According to the Statesman, she will be replaced by occasional freelance writers. Schwaiger strongly states:

Unassisted freelancers aren’t likely to replace van Ryzin’s sense of mission. For her, the writing is never about the author – never a platform to air one’s wit, show how cerebral one is, or make grand displays of cultural acumen, as is always the temptation for the freelancer (I admit) – no, for van Ryzin, it’s about opening up the artist’s work for every reader.

Van Ryzin received a bachelor’s from Columbia, a master’s from the University of Texas, and worked at both the Austin Museum of Art (now the Contemporary Austin) and the Ransom Center. She did freelance editing and writing for The New York Times, Art Lies, Art Papers, and the Statesman, among others, in 1997. Two years later, she became the Statesman‘s full-time critic.

The bummer decision of the Statesman may be best summed up by grayDUCK gallerist Jill Schroeder: “The message this sends is that the paper doesn’t regard the arts community as a very important part of the city.”

Please note Ms. Van Ryzin attended Barnard College (which is one of the schools of Columbia but important to differentiate). Thank you.

It’s a newspaper! You know, physical newspapers. Birdcage liner material, car ads and yesterday’s news. They have long ago proved their general disinterest in visual art, especially in Texas. They typically layoff and fire from the top quality of writers down, so she should find it a validation of talent. Glasstire and countless other vital and inventive media (both online and in print) carry on the torch, and often quite valiantly.

Darn, Austin is not only a music city, it has a lively visual art scene hat needs to be nurtured. Letting Jeanne Claire go is a tragedy for art in Austin. PLEASE BRING HER BACK!!!!

thats a tough beat, JCVR, I imagine, will hopefully find some outlet for her voice, if not in Austin then a better city for the arts. Her efforts and writing helped the statesman at least portray a veil of interest in the creative arts in the TX capital for a long time. many who have lived in Austin for a while are dead tired of the crap music most of the city churns out daily for quick profit, and the struggle to make unique, original creative work in any medium gets harder & harder every year and Austin loses more and more of its finest artists for better cities, this sux, and I can’t imagine it will get any better over the next 4 years, strap in, strap on I guess 🙁

Not surprised. The culture is following the reduction of the appreciation for the arts and the rise of the flip-flopped, cargo pants wearing, t-shirt adorned, fast foodie and gimme’ hatted middle class.

Are you the Bill who has the chance to write for a national publication but only promotes himself and his cronies? Need more art critics and less self-glorifying directors who moonlight as writers.