Terry Allen’s Road Angel: “Every Freedom I Most Value” 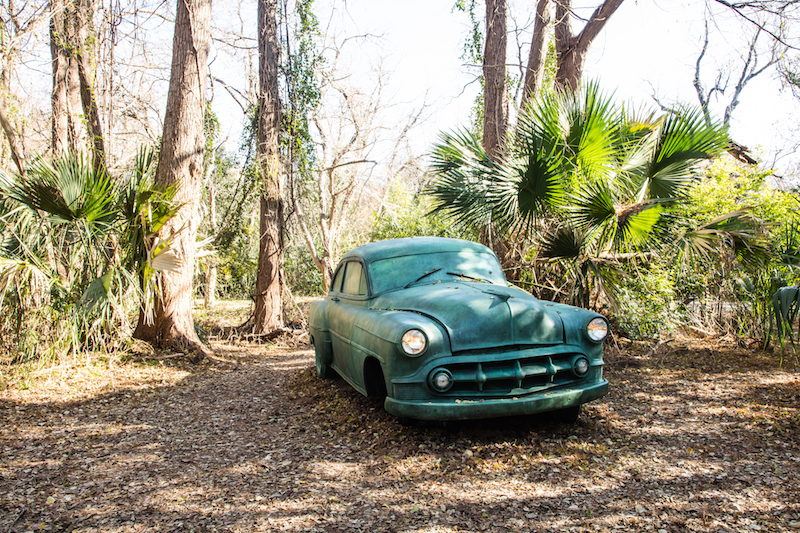 It was 1963 in Lubbock, Texas. Coming of age in the twilight/dawn of John F. Kennedy’s New Frontier, Terry Allen and his friends generated a rite that echoed a pioneer Texas pastime, the ranch dance, when folks would travel long distances to gather and dance to a fiddle band. “A dozen carloads of us would head out to the cotton fields, loaded down with bootleg beer and whiskey,” the artist recalls. “We’d park in a perfect circle with the headlights aimed in, tune all the car radios to the same station and dance in the dirt. At 10 p.m. or so, we’d tune in ‘The Wolfman’ on XERF out of Del Rio with its massive transmitter in Ciudad Acuña, Coahuila and drink and raise the dust to that.”

At other times, blasting up through the heartland from the banks of the Rio Grande, the mysterious voice of The Wolfman held Allen spellbound as he drove alone through the Panhandle night. It was, he says, “impossible to know who or what that voice actually was. Some thought it was Moms Mabley, the great gravel-throated female comedian of the time, and some thought it was a Mexican jive artist or black hipster preacher rapping. But whatever it was, it was the music that it played that was the true revelation. Music you heard for the first time that opened every door and actually changed your life RIGHT THEN AT THAT MOMENT… Rock n Roll, Rhythm n Blues, from New York City across to LA and down through Memphis to New Orleans and the Mississippi delta… AND with the actual recordings of wolves howling placed exactly in the middle of the perfect place in any song that made your greasy hair stick straight up!

“That sense of hurtling through great black empty space… late at night on a dead straight line of asphalt with headlights shining… driving a car as fast as it would go… and listening to ‘The Wolfman’ on the radio turned up as loud as it would go… is probably where every freedom I most value in my life first began.” 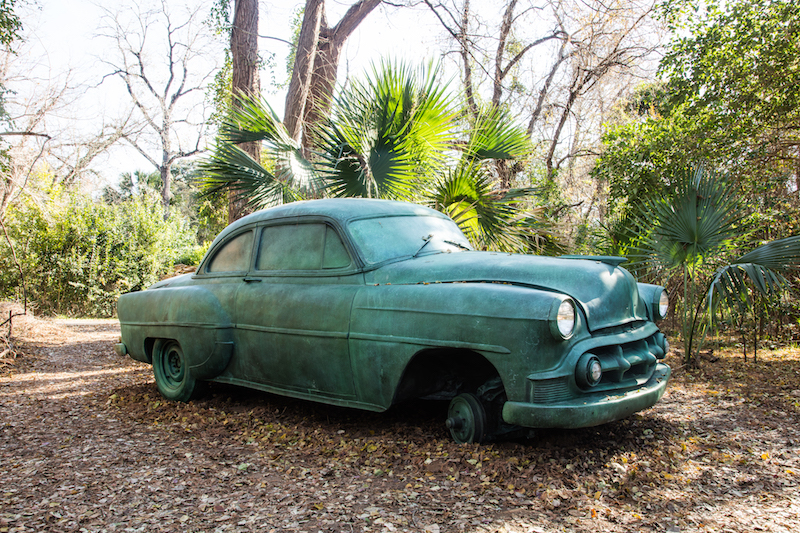 The iron beast on wheels that transported the young artist through space and time was a sweet ’53 Chevy. And now a bronze poltergeist of the escape-from-Main-Street wagon has come to rest on the wildscape grounds of The Contemporary Austin Laguna Gloria. It’s in the body and soul of Allen’s sculpture and sonic installation, Road Angel.

The wooded peninsula that juts out into the Colorado River and an adjacent lagoon on which Clara Driscoll built her 1916 villa, repurposed as an art museum after her death in 1943, used to be even wilder. Long before Clara worked to save San Antonio’s Alamo from demolition, Native Americans camped on her future Austin estate to partake of a spring. A State Archeological Landmark, remnants of their campsites are said to remain extant.

The grounds were still somewhat feral in 1979 when I worked as a clerical assistant at what was then called Laguna Gloria Art Museum. Strolling the tangled paths one afternoon I happened upon a couple in their birthday suits, poorly concealed beneath a pile of brush, going at it from hell to breakfast all Adam-y and Eve.

Though the terrain is a bit more sedate today, especially after extensive recent pruning to remove invasive plant species, the presence of Road Angel reclaims a rockin’ legacy of zona libre cool. Peering into the unseeable back seat, inadvertent voyeurs imagine a pair of steamy young lovers, enraptured with the outlaw pulse of eros on the run.

We might also see the sculpture as a happy fugitive from the automotive graveyard. Its right front tire and wheel already lost to some unspecified indignity, the bruised-and-battered, patina-proud ’53 rests in a sylvan glade, with a view of the lapping Colorado, its innards secure from any further bone-picking and junkyard salvage.

But like the man says, You got to move, child. You got to move. It’s all about the locomojomotion and the passage and the sound that gets right down in the road that runs through it. Every journey has a soundtrack, and Road Angel lays down a linear blast of a hum and a thrum and a throbbing bassline with pulsing rhythm and steel guitars that bend and moan and fill up the corners of our big ol’ melancholy highway with that amber ache that makes you feel alive. 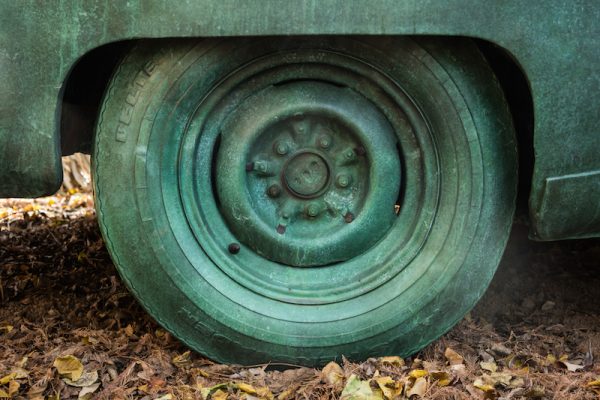 The looped audio that emerges from some mysterious chamber within the sculpture includes hours and hours of material, so anytime you visit Allen’s messenger of our communal pathway you’re likely to hear a different groove. A pair of adjacent tree stumps make fine spots to park your trunk and allow the soundtrack to massage your memory and tweak associations as your mind drifts with the river’s muse.

Over the course of several visits, I’ve heard a collage of songs, stories, and sounds that often address our culture’s automotive mythology. Jimmie Dale Gilmore’s bouncy rendition of Butch Hancock’s Red Chevrolet shares headroom with Leonard Cohen’s Back on Boogie Street and the Blasters’ Long White Cadillac (by a different artist?), Your Cheatin’ Heart by the lonesome-est heartbroke-est drifter that ever haunted a highway; Shawn Colvin’s take on Springsteen’s Racing in the Street, and some cuts too delightfully mysterious to decipher. Allen’s sons Bale Creek Allen and Bukka Allen contributed the tunes Winters-Wingate Highway and Land of Dreams. 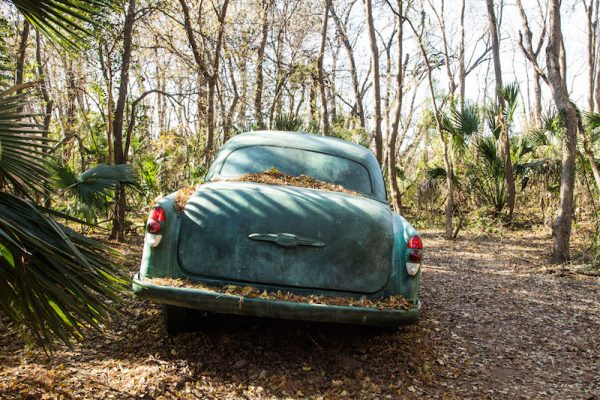 Storytellers like Texas Tech’s artist-in-residence Andy Wilkinson unfold tales about beloved ’51 Mercs, Henry Ford’s only son Edsel Ford, a horse that ate the rag in the ragtop of a ’52 Ford, and the voice of a ’53 Bel Air Chevy that confesses, while it once “was brand new,” has become “an art object today.” One narrator recounts a family saga in which his Open Road Stetson-wearing father lost a job and its “fine company car” and had to buy a ’52 Chevy “from the bad side of town” to move from Texas to Pennsylvania, somewhat Grapes of Wrath-ish, to find work. In time, after the narrator learned to drive in the ancient conveyance, he would sit in the ’52 at night, pretending he was driving it back home to Texas. Ed Ruscha sent Allen a spoken word recording of Amber Tamblyn’s text, Vehicular Ventricle. David Byrne, Jan Reid, James Drake, Jo Harvey Allen, and dozens more also contributed audio. And amongst the scritches and scrootches of scanning-the-dial sounds, you can even hear the Grandpappy Rapmeister of Border Radio, the Goat Gland Man, Doc Brinkley, snake-oiling for treatments derived from his early agricultural version of Viagra. The Carter Family’s announcer follows a snippet of Keep on the Sunny Side with an invitation to come down to “Old Mexico,” and the “old Wolfman himself” offers listeners a hundred baby chicks by mail and “a LIFESIZE AUTOGRAPHED PHOTO OF ME THAT GLOWS IN THE DARK.”

It’s kind of a shame that we can’t visit Road Angel at twilight and beyond, to experience the piece as darkness is dented by the tiny flicker of the ever-burning red tail lights and the soft beam of the white headlights. My sense is that we might come upon it as a retro UFO, as alien and common as beatniks in a 1950s ‘burb. 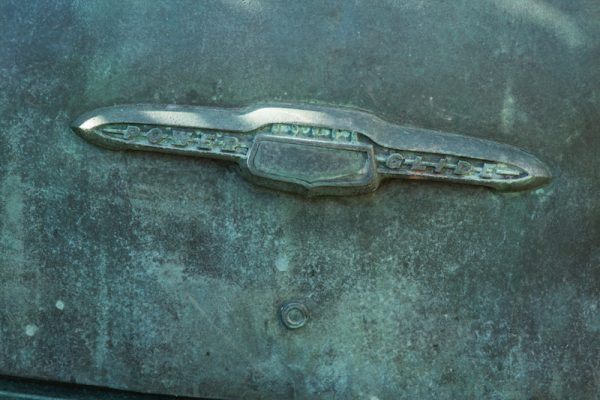 Through my series of Road Angel visits, I came to feel like I was sitting with an old friend. As a person with some mileage on his mortal chassis, the sainted ’53 for me represents an element of the visual landscape that has receded as I’ve aged, disappeared in slow motion. It’s become an oasis of the familiar, yet one that beguiles with glimmers of a personal frontier. And of a road that, yes, goes on forever… .

Afoot and light-hearted I take to the open road,

Healthy, free, the world before me,

The long brown path before me leading wherever I choose…

You road I enter upon and look around,

I believe you are not all that is here,

I believe that much unseen is also here.

You express me better than I can express myself,

You shall be more to me than my poem.

It can be difficult today, after decades of social change and zippy transit along the information superhighway, to grasp the cultural impact of Wolfman Jack on 1960s America. So strong was the spell he cast across the airwaves as he exhorted the nation’s youth to “get nekkid and squeeze mah nobs” that… well, in 1988 when I gave a talk at the Tyler Public Library on my book, Border Radio – Quacks, Yodelers, Pitchmen, Psychics and Other Amazing Broadcasters of the American Airwaves, a starry-eyed lady approached me afterward and related that she and her friends had started out one night from Colorado, on LSD, to drive to Del Rio and offer their worldly goods in service of the howlin’ prince of platters. Kinda shudder to think about that now.

The Keinholz piece was commissioned by a German collector near Hope, Idaho. As far as I know it’s still in the woods outside of Hope. According to my friend who saw “Mein Camp,” Kienholz would never publicize the piece during his lifetime. The whole thing is cast bronze: the felled tree, the figure, stacked logs and campsite, and the entire vintage truck including all the interior parts: seats, engine, everything. It must have cost a fortune in bronze. Not that many people know about it.

looks like an incredible piece of art to unwittingly stumble on, especially if there is a soundtrack playing..I would love the opportunity to photograph this piece!