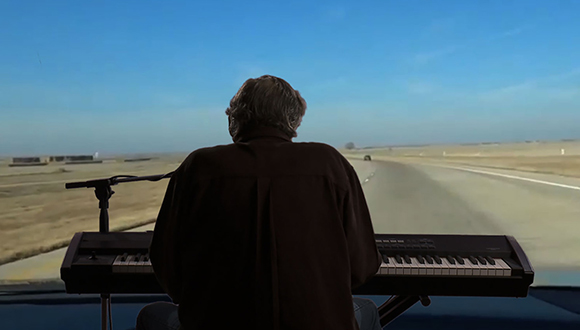 “Sometimes the thing that makes a song,” writes Terry Allen,“happens long after the song has already been written.”

In Terry Allen: MemWars, on view at the Blanton Museum of Art, the 78-year-old artist and musician invites us into his songwriting (and storytelling) process through a series of vignettes modeled after sintesi — Italian Futurist micro plays made popular for the stage and screen a century ago. Sintesi, which means “synthesis,” seems like a well-suited genre for the anti-genre Allen. An outlaw country musician with a flair for French writers and a penchant for the pan-disciplinary, Allen does not discriminate when it comes to making music and art.

The Blanton show features over 20 new works on paper and a three-channel video installation that pulls back the curtain on the people and places woven into his songs. The visual and textual commingle in Allen’s collages, with scenes that play out in graphite and gouache and snippets of story that read like scripts. Characters, both real and imagined, bring each tale to life: a Denny’s waitress, a desert whale, Lassie and Marquis de Sade, together at last.

“It’s really all one thing for him, he’s very adamant about that,” says the exhibition’s organizer, Carter E. Foster. “None of his creative pursuits are separate from the other.”

If Allen’s visual art is a map key to his songs, then his songs are a map of his life: stored memories and memorable stories, from the intimate details that shape an individual early on, to the monumental moments that never quite loom as large. “In 1967 my friend Stan was killed in Vietnam,” Allen recalls onscreen. “He was in my wedding.” 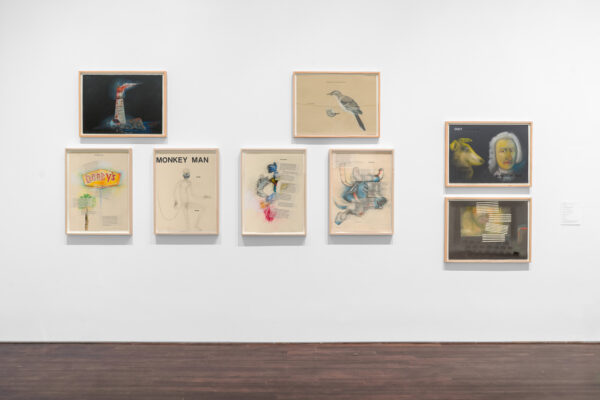 The Vietnam War, and the general agitation of the 1960s (when Allen was young and agitated himself), are entangled in a lot of these pieces. MemWars as a title alludes to that era, but also to the unfought internal battles from long ago. The diptych Proximity (2019) demonstrates such cause and effect: on the left, an image of a house that reads “Where It Happened 1,” and on the right, a portrait of a head that reads “Where it Happened 2.”

Allen, who grew up in Lubbock, reportedly couldn’t wait to get out. And yet, that flat Panhandle horizon offered him an empty canvas like no other: a sense of freedom and a sense of boredom, along an endless highway of the imagination. That highway eventually brought him and his lifelong collaborator and wife, the actress Jo Harvey Allen, out to California in the 1960s, where they lived for many years. First, in Los Angeles (Allen graduated from the Chouinard Art Institute), then the Bay Area before settling in the Central Valley, where Allen taught at Fresno State.

California and Texas tend to bookend the auteur’s mythos of the American West, along with the borderless borderlands of the U.S. and Mexico. Allen’s 1975 concept album, Juarez (which, come to think of it, sounds a bit like MemWars), metaphorically treks across this entire region, culminating in an ill-fated encounter between two couples from its opposite corners. Though the album isn’t explicitly referenced in the Blanton show, a similarly dark and atmospheric mood comes through. 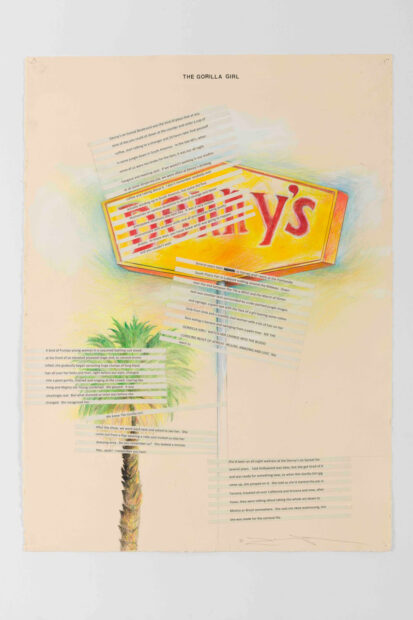 Juárez — the city, not the album — does get an honorable mention in a collage-based work titled Road Runner (2018-2019), in which Allen recounts a story about his old friend Stan, the one killed by a landmine in Vietnam. Thin strips of text have been neatly affixed to a blurred pastel of the Looney Tunes character, describing a drunken weekend in Juárez, where Stan had the cartoon tattooed on each calf: “…the roadrunners were the way he was identified,” writes Allen. “I didn’t even know he’d been drafted.”

Recollections reside in messy piles of the sacred and the absurd; nothing is clear-cut or linear in these narratives. In fact, Allen’s praxis appears to be one giant collage, reworked over and over, until all the pieces get at a truth if not the truth. Innermission (2019) admits as much, with its murky tale about some kid getting into trouble at a movie theater, though its details get lost inside the film itself: “He thinks he remembers this / Maybe he doesn’t / Maybe he’s making it up / Maybe both.”

Though the show’s collage-based works were all made in 2018 and 2019, the video component of MemWars was first screened in 2016 at SITE Santa Fe (the Allens now live in the city). For the Blanton edition, the installation is housed in a site-specific theater that takes up half the gallery. With a runtime of 82 minutes, the video features nine segments that alternate between narrative and performance.

Allen and wife Jo Harvey talk it through on opposite walls before the center screen lights up with Allen, at his rickety piano, playing whichever song was born out of their story. Corresponding footage — a full moon, an endless highway, wreckage from a twister — accompanies each piece, while Allen, hunched over at his instrument, dutifully plunks out both song and myth.

One of the more memorable segments recalls a trip the couple took to Cambodia, which ultimately links the Khmer Rouge regime to the Oklahoma City bombing some years after. The particulars are impressively convoluted, but suffice it to say Allen’s song, “Peggy Leg,” is a poetic intersection of the two events: “There’s a one legged woman / on the dance floor / and that one leg’s so pretty / she don’t need no more.” 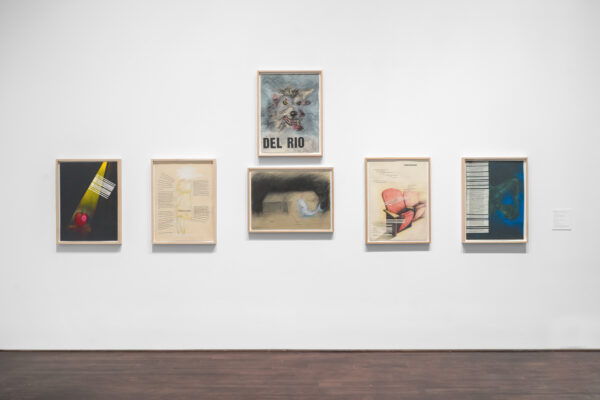 Another segment describes a deadly tornado that touched down in their North Texas town during adolescence. People were eating tumbleweeds, Jo Harvey recalls: “The dirt blew all weekend.” Allen ponders the death of a classmate and a woman cured of cancer during the ordeal before offering up his tune, “The Lubbock Tornado.” In a way, Allen’s storytelling style is a bit like a twister, sucking up everything in its path and rearranging the contents accordingly. 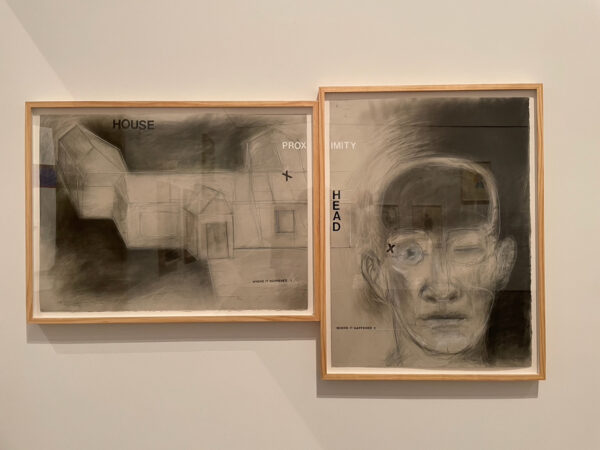 Lubbock (on everything), Allen’s other concept album from the 1970s, claims several onscreen performances in MemWars, including “The Wolfman of Del Rio,” “Blue Asian Reds” (another ode to the ravages of war) and “Amarillo Highway.” Despite the vast stretch of highway of Allen’s own imagination, we get the sense that Lubbock remains the ever-present backdrop of his sintesi; that the unpretentious genius of his music and art might very well come from that empty horizon of wide-open mystery.

Maybe the thing that makes a song happens long after the song has already been written — and long before there ever is a song.

“Wide open mystery”is a just about perfect way to describe that particular feeling I get from seeing/listening to Terry’s work. Good article. Thanks.

Good article! There is a typo, though. Flair, not flare.

Debe! Thanks for catching that. -BP