One of my favorite pieces of 2017 is an Instagram video by the Austin-based artist Charles Zhang. Played in slow motion to the drop of the new-age Enigma classic Sadeness, Zhang, wielding a samurai sword, slices perfectly in half a pineapple thrown at him from outside of the frame. I’ve watched this video perhaps a 100 times and pondered what precisely makes it so absurd and charming, hilarious yet strangely impressive. This video at least partly articulates the ineffable essence of Zhang’s work as a painter, whose watercolor pieces are funny, exhilarating and beautiful, often all at the same time. 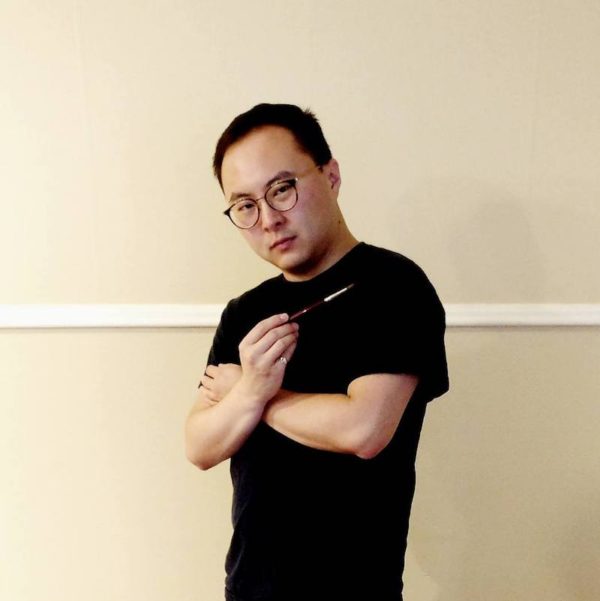 Zhang is a compact, intense, bespectacled man who usually wears all black and initially projects the vibe of the terse assistant who brusquely shows the detective out of a mansion after the scion of a shady family is questioned. I believe he uses this normie façade as a stealth disguise of his true eccentricity. An example: I was having a drink with a friend in Austin and asked about the dog-tag necklace she was wearing. Zhang had made the tags and had given them out to people. On one side they read “Charles’ Slave,” and on the other, “Bush did 9/11.” Zhang has an effortless fluency with surrealism; his humor and creativity collide into a frisson of dark wonder. Most of his works are “jokes” but the punchline is a twisted denouement that rolls around in your mind for days. 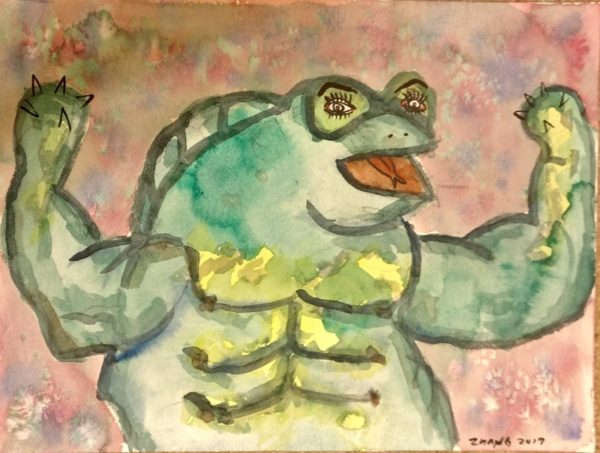 Zhang’s show from 2016 at Las Cruxes in Austin (which I reviewed), found Zhang inserting himself, feral and with sharpened teeth, as iconic film characters such as Braveheart. The works articulated the mania of vanity, the perversity of dreams, the embarrassment of imagining one’s life as a film and one’s self as the hero. For his current show at EAST 166, Zhang’s portraits present grotesquely gleeful lizard people, which conjure the paranoid fantasies found in Reddit forums, InfoWars, and the writings of David Icke — the idea being that the people who run the world are actually Reptilians, or lizard aliens. Zhang clearly had this in mind, as he describes the show:

“I was thinking of a comic book idea where we fight in an intergalactic space war and lose to space lizards that enslave us. The actual idea of lizards is because I was eating at a buffet and I thought only a being who never ate real human food would serve this to humans. They all wear cool suits in the future, because everyone in my universe loves Miami Vice and Don Johnson.” 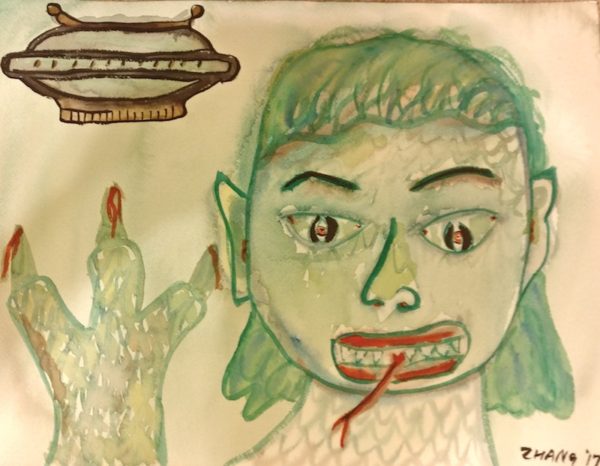 It’s a blissfully silly concept, but one that strikes deep at some profound concepts. Conspiracies, especially those as humid and deranged as Lizard People, are a form of negative faith. In some ways it would be so much more comforting if all the glum horrors of the world, large and small, were the work of nefarious alien overlords instead of the bleak systems we created for… “civilization” I suppose. Nostalgia also seems to be taking on the halo of faith. As the world becomes more baffling and unsettling and we feel increasingly powerless, the media memories of the past swathe us like an opiate blanket. 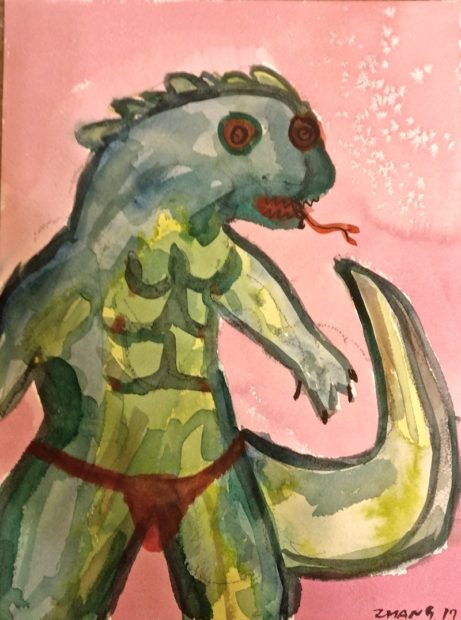 Zhang’s Lizard People are depicted in various states of celebration and leisure. One, wearing a red banana hammock, has a dazed, blank expression as if Fabio was snapped by the paparazzi leaving a tanning bed. Another, a turtle-shelled lizard person, is in a state of EDM-like rapture, perhaps stamping to a bass drop on the playa at Burning Man. Zhang has a natural, elegant, classicist style with his watercolors, and despite the absurdity of the subjects, the pieces have a stately beauty.

Zhang’s works have the commonality of ruthlessly interrogating the hysteria of ego. The more he spins out into fantasy, the more pitilessly recognizable his portraits appear. The penetrating honesty of Zhang’s vision is tempered by an insouciant warmth. When I asked him about humor in his work he simply responded: “I don’t know, I just like having a good time all the time.” A “good time,” like the brilliant film of the same name, can mean a lot of things. It could mean skipping mimosa service with your friends to train with a samurai sword, to prepare for the lizard people.

Charles Zhang’s work will be on view during the East Austin Studio Tour, 2017 at EAST 166 at Bolm Studios.

Invasion of the Bug People (and Bug Art)