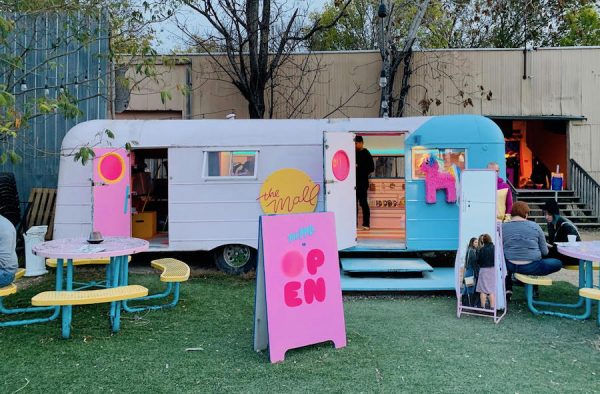 A pop-up at Canopy

Big Medium rounded up more than 800 artists for this year’s EAST, Austin’s annual art-pocalypse, which stretches out across the city’s storied East Side for two very full weekends. The free, self-guided tour (which takes place Nov. 16-17 and Nov. 23-24 this year), celebrates an eclectic neighborhood known for its rich history and hipster-y vibe, with studios, galleries, businesses, and pop-ups opening their doors to a curious throng of onlookers in search of some cool shit.

Here are the highlights from Weekend 1:

Built in 1914 and beautifully restored a century later, Oakwood Chapel is a non-denominational reflective space that also hosts quarterly art exhibitions. (According to its website, the permanent exhibit is the cemetery surrounding it.) A panel made up of Reverend Daryl Horton (Mt. Zion Baptist Church), Ben Heimsath (Heimsath Architects), and filmmaker and producer Collin Hardeman (Amaz1n Entertainment) discussed the vibrancy and diversity of African-American churches in East Austin — as well as their preservation on prime real estate. Following the panel discussion, a joy-infected performance by the choir of the Church of the East Side rounded out the cerebral with the spiritual, blowing the roof off with a rendition of “A Shelter in the Time of Storm.” 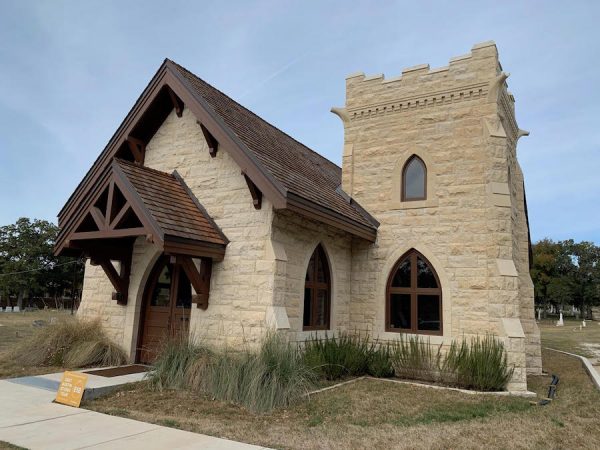 To Believe is a digital display of historic photographs as well as Hardeman’s three-screen video installation, with footage of church services from four local congregations. (His crew strapped GoPro cameras on their heads to capture the many hours of worship, which he then condensed into 25 minutes.) Inspired by the life and legacy of Reverend Jacob Fontaine, a black Baptist minister who founded six churches in Austin after becoming a free man at the age of 57, To Believe is a must-see for anyone interested in the culture and history embedded in the city’s East Side.

As EAST’s unofficial epicenter, Canopy, the arts complex at 916 Springdale Road, was busier than ever this year, and after pushing past the beer lines and baby strollers, a few things really stood out. Painter Nadia Waheed’s open studio showcased approximately 10 works in progress; large-scale female portraits which feel both feminine and feminist. Waheed, a willowy 20-something with a waterfall of black hair, has already caught the attention of several galleries outside the U.S. Her paintings almost always portray women who embody modern and traditional, strong and sensual, Western and non-Western sensibilities — a dichotomy she likely identifies with, given her Pakistani heritage and American upbringing. 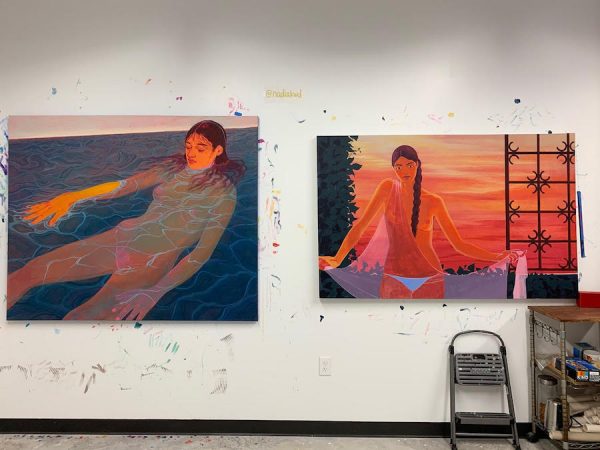 Works in Progress by Nadia Waheed

Black Mountain Project’s The Vegetal Other is an immersive audio/video experience in a pitch-black “micro space” which offers limited seating. Plants in dire need of photosynthesis line the floor just beneath a screen playing The Secret Life of Plants (1978), a documentary about African-American agriculturalist and scientist George Washington Carver, complete with a score by Stevie Wonder.

Artists Adrian Aguillera, Betelhem Makonnen (the most recent winner of Big Medium’s Tito’s Prize), and Tammie Rubin make up the Black Mountain Project — an ongoing collaboration which encourages discourse around art and culture for and from people of color. 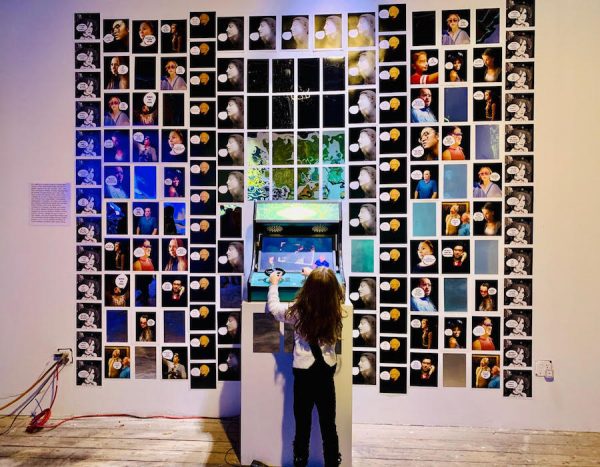 Fantastic Arcade Retro(spective) at The Museum of Human Achievement

The Museum of Human Achievement (MoHA) has transformed its 7,500 square-foot space (a former sex toy factory) into an epic arcade experience. To celebrate Fantastic Arcade’s 10th anniversary, this retrospective exhibit is packed with indie video games and digital art, complete with throwback cabinets and theater-sized screens for all your retro recreational needs.

Preservation Austin and the Texas Society of Architects co-hosted two photography exhibits which speak to the architectural extinction of our ever-changing skylines. Lily Brooks’ Drawing the Moon is a black-and-white spread of Austin’s disappearing moon towers, which were initially erected in the late 1800s. By using good ol’ fashioned film and taking long exposures, Brooks achieves deep darkness and tonal range with her gelatin silver prints, intertwining each image with their historical context. “I think of light and dark from start to finish,” she confessed at the artist’s talk this past Saturday evening. 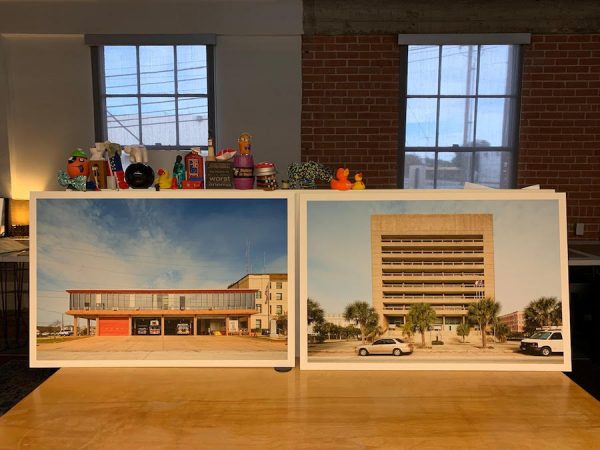 Leonid Furmansky’s Where Architecture Meets the Sea captures the strange facades of Galveston, Texas, by way of Coney Island, New York. The Brooklyn native, who grew up by the boardwalk before moving to Austin, first visited Galveston as a BMXer and BMX photographer, exploring the city’s many ledges, rails, and tunnels on his bike: “I found architecture on two wheels.”

The city’s backdrop became a thing of beauty as he began photographing structures in Galveston which didn’t necessarily speak to Galveston — big behemoth buildings which instead reminded him of Brooklyn’s housing projects. Furmansky’s Coney Island roots drew him to the seawall, conveying a loneliness in his filmic photos, which are slightly blurred around the edges. But architecture without people has no purpose, Furmansky explains. “And People move to Galveston to be left alone.”

Poetry on the Porch

The final highlight of Weekend 1 was as far north as one could go without leaving the confines of the East Austin Studio Tour, in a neighborhood known as St. Johns. Thelma “Grandma Wisdom” Williams was performing for a small audience from her porch. Part spoken-word poet, part motivational speaker, the 78-year old longtime resident shared life stories and little insights while we all sipped on hot chocolate and listened to her recite verse in her “Love Yard.” 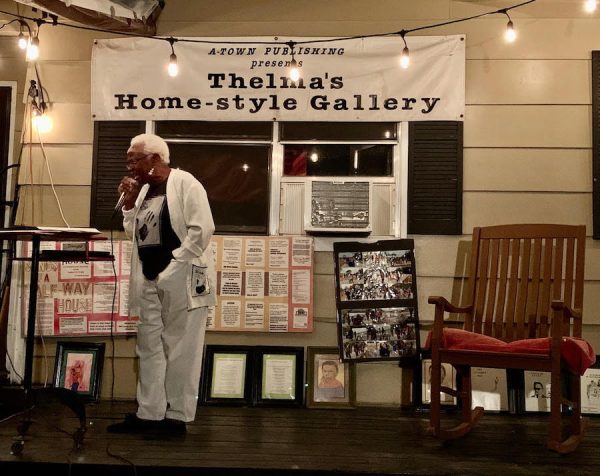 Affirmations eschewing hatred and self-doubt are posted all over the premises, as she insists, “You gotta love away the hurt.” Thelma talks about having raised two kids on her own, feeling angry and abandoned at times, being frustrated as the only black female employee at her former job (“I’m fluent in good ‘ol boy,” she jokes), and transforming all of that hurt and pain into something positive.

Her performance felt wonderful and inspiring, and decidedly un-EAST — a quirky contradiction which makes it all the more East Austin.