A Conversation About Art and the Silos on Sawyer 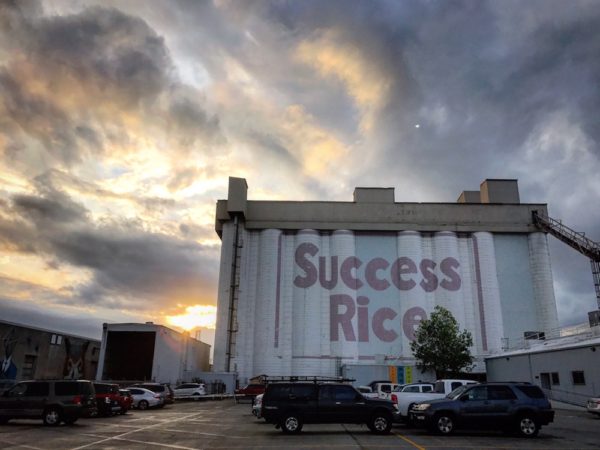 Christina Rees: This could be a discussion about art versus architecture, but I don’t think it needs to come to that. Because I didn’t see the inaugural version of the Silos show last year, I can only say that this virgin time for me walking through them last weekend was really exciting. Just completely novel — I’ve never been inside a grain elevator — and I drive by these giant silos all the time throughout Texas (actually, I have a good view of the massive Pearlstone silos from the roof of my house in Expo Park, Dallas), and I loved taking it in architecturally. And the smell is so distinctive.

With that, I think some of the artists did an outstanding job of using these incredibly weird, difficult, monolithic cylindrical rooms. Certainly some of the work was strong enough to pull me from my silos-are-cool reverie to get me focused on the art.

What do you think of the venue, and how would you compare this show to last year’s kick-off version? 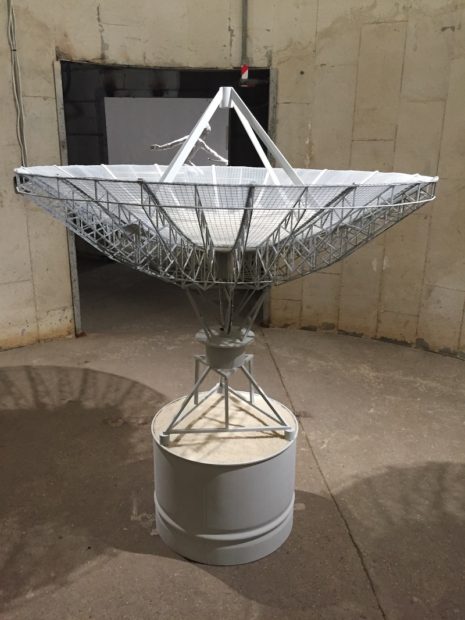 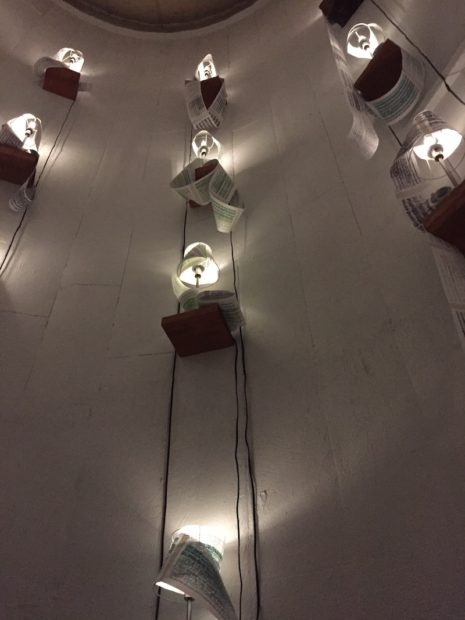 Rainey Knudson: Well, there is arguably a gimmicky aspect to showing art in a grain silo — it’s not an ideal setting, generally speaking, for showing work. I wouldn’t want to try to run a commercial gallery in there.

But I like the silos. As you say, who’s ever even been inside one? They are very, very specific.

The artists who have done best, both last year and this year, have really stepped up and responded to the oddness of the architecture. They consider the circular spaces, the nature of the sound in there, the sort of beat-up concrete walls and floors, and even the cool, damp air and the faint smell of rice. I agree that this year was uneven — some of the artists either couldn’t or didn’t bother to do something interesting with the curved walls, and that was also the case last year. But the best of the installations really stuck with me. Last year about half of the artists really knocked it out of the park: Jesse Lott, Chris Sauter, Ed Wilson, Joe Mancuso and Jeff Forster all come to mind. Jo Ann Fleischhauer did an installation that I think might have fallen flat in a rectilinear space, but that worked beautifully inside the hollow column of the silo — she’s an example of someone who used the shape of the space to her advantage. Same for Sharon Kopriva, whose circle of creepy macabre figures also worked well in the silos last year, but I think wouldn’t have had the same impact in a regular gallery.

Interestingly, a lot of the artists use motion-activated lights or sounds in the silos. There’s something theatrical about the setting I suppose. As a viewer you repeatedly enter these individual cylinders and set them off. 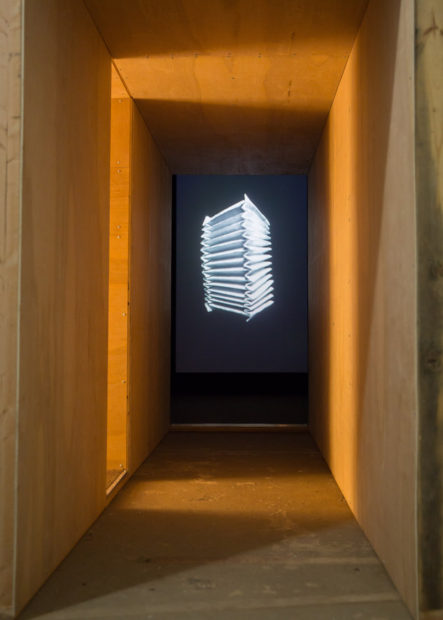 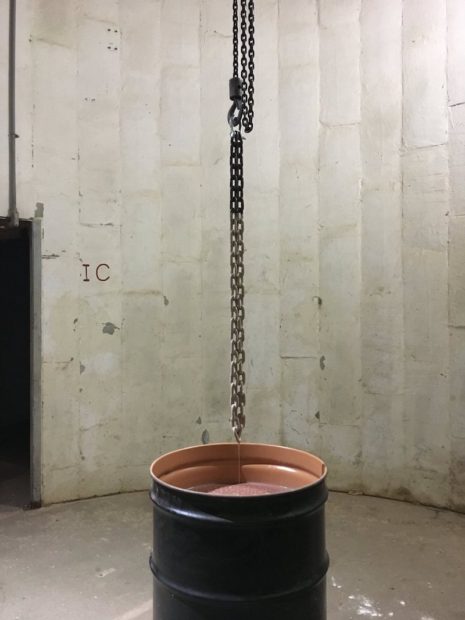 CR: I will say we got lucky with how and when we walked through it. The show hadn’t opened to the public, and Trey Duvall opened the space for us and had it all up and running. So we could hear and see everything without crowd noise or interruption. I think you and I both fell hard for Jeff Shore and Jon Fisher’s room, which is motion-activated, and the sound aspect of it is crucial. Though they’re also the ones who completely obliterated their cylinder by building a square video projection room inside it. Those guys are so, so good. Cam Schoepp’s piece, with the heavy chain dipping in and out of the big paint-filled drum, was an inspired bit of harmony with the space. It felt like it was an absurdist, working part of the silos, like it’s something you could find in any big grain elevator, and it’s just doing its mechanized job around the clock without human intervention. What else stood out to you? 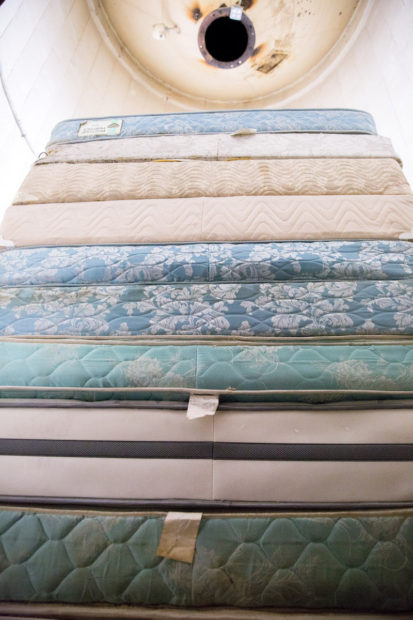 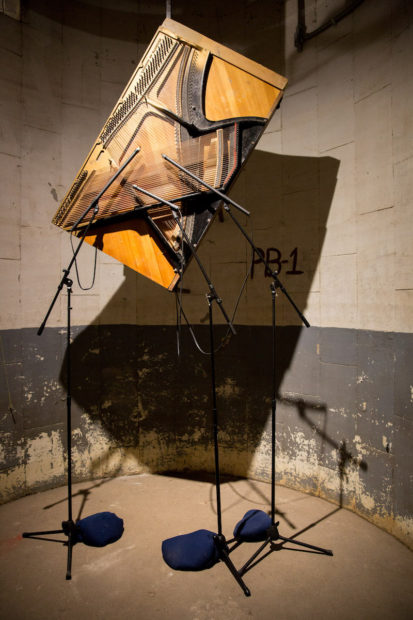 RK: I thought Joe Havel did something really interesting with his stacked mattresses that almost prevent you from entering the silo. That was good, and felt like him stretching out and having some fun. There was both a nice formal quality to it, but also some pathos as well as humor, and Joe doesn’t normally do humor. Tommy Gregory’s mirrored disc — another motion-activated piece — was nice, although they shouldn’t have dimmed the light. Let the people be blinded by the light! I was sorry we didn’t get to see Kaneem Smith’s silo, as I’ve really loved the ceramic pieces she’s been doing lately. She was still setting up: occupational hazard of previewing shows before they open.

But one of my favorites was Mark McCoin, who had a (again) motion-activated sound piece which involved vibrating tools against what looked like the guts of a piano — just the string part under the hood, but hung vertically. I liked how that riffed on experimental music, chance, and of course the viewer participation. Also it was just a cool noise in that space.

I think the best thing about these Houston Sculpture Month shows is that they give an assortment of artists the opportunity to really shine. I’ve come to look forward to the shows, and not just because of the venue. I don’t know if the artists feel less pressure so they loosen up in there, or we’re seeing people who aren’t showing as much, or they just really step up to bat — or some combination thereof. But this has come to be one of the best regular group shows in Houston, in just two iterations.

A cautionary tale (or an inspirational one) for other statewide shows, like the Texas Biennial and others? 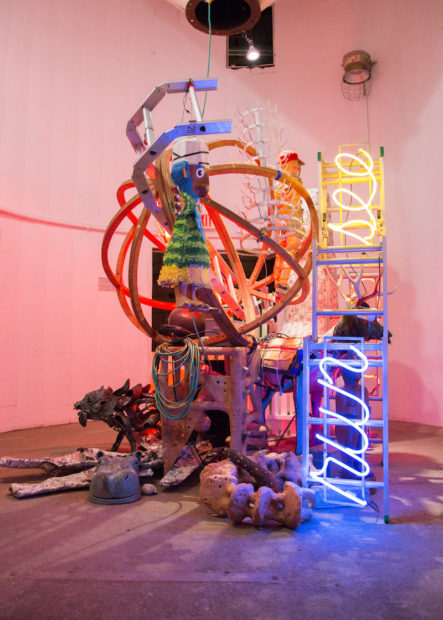 There are so many great sculptors in Texas that giving them another interesting space to stretch out and try things is satisfying. Though I wouldn’t want to see the Texas Biennial, in any of its past or future forms, tie itself into a venue as distinctive as a grain silo for fear of it becoming gimmicky, although a silo space could be part of a much bigger Texas Biennial (which you and I have both argued for).

So here’s what I’m wondering after seeing this one: does this whole concept run its course after a few more years? Or do the future artists in this show just get a chance to push themselves more and more… and more, to keep the silos viable as a space? How crazy and unexpected can the work be? I’d like to think that in six years’ time we’re really looking forward to seeing what that round of artists manage to do with the space, rather than rolling our eyes and going “Not the Silos thing again.” 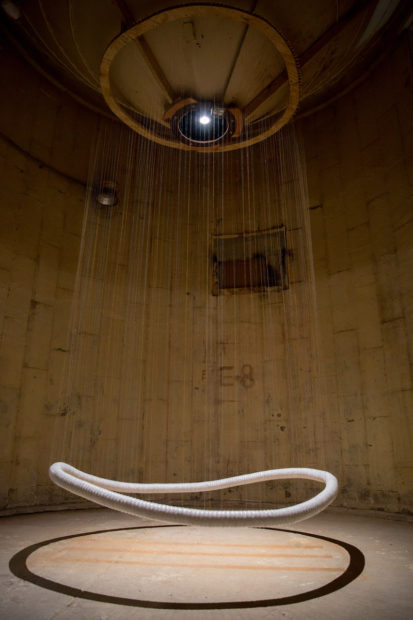 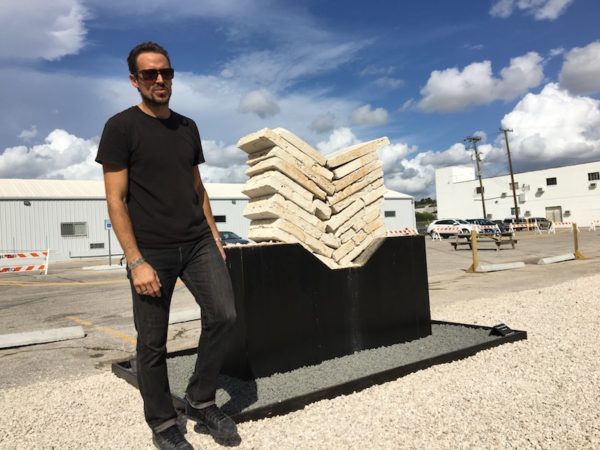 Trey Duvall in front of his work outside the silos.

RK: This is a good point. It’s easy now because they started with the low-hanging fruit in the sense of getting some of the strongest sculptors in Texas to do installations. But some of these people have been making work for decades — great sculptors don’t just grow on trees. I could see two more really good group shows, maybe three, and then they’ll probably need to tweak the format.

I love the idea of handing the entire space (some 25-odd silos in total) to one artist, or an artist working with a performing arts company. As you say, the curation is everything. Up to now, it’s been mostly excellent. I’m OK with a few duds.

Regarding longevity: the silos are a readymade immersive environment, and immersive playground art is king in the international art world right now. I heard that pretty much summed up the Venice Biennale this year. With the silos, you don’t have to do much to give the viewer a cool experience, at least for the first visit. They have this in common with the Cistern in downtown Houston, and with similar old industrial spaces in other cities. But some point, immersive playground art will fall out of fashion. I think most serious artists have moved on from the idea (if they were ever there to begin with), even as the museum cash registers merrily ring up all the bums in seats.

For now, I assume it’s far cheaper for the developer of Sawyer Yards to host art shows in the silos rather than to tear them down. And I’m happy to keep seeing how artists respond to the spaces. Some of these installations will stay with me.

‘Tensile Strength’ is at SITE Gallery Houston at the Silos at Sawyer Yards through Dec. 2, 2017.

The Next Frontier: A Visit to Ken Little’s...

I hope that John Deal stays the course with this space. In a matter of time there could be some flavor of the month brewery or restaurateur wanting to “SODOSOPA” or “Transport and Renew” these amazing silos. The bar is being set here, I hope that other developers look to artists to engage their warehouses or such spaces.