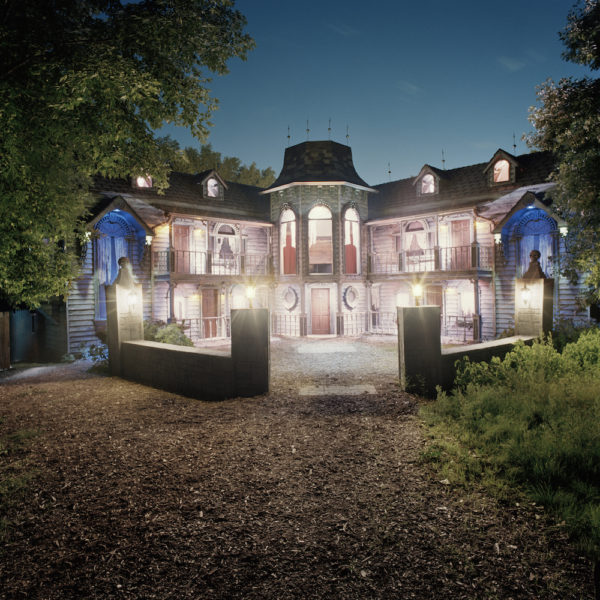 Given our political moment, this may not be the best time to ask the question “What do Americans fear most?” But if you finesse that question a bit and instead ask “What do Americans find most thrillingly creepy and spooky?,” you’re going to have a much more friendly conversation. And Misty Keasler, the Dallas-based photographer, would be a great person to ask, seeing how she’s spent so much of the last couple of years photographing our nation’s most acclaimed commercial haunted houses.

Keasler’s solo show opened at the Modern Art Museum of Fort Worth last weekend, just in time for the October descent into our country’s annual Halloween state of delirium. Haunted houses have a come a long way since the ‘70s and ‘80s, when most were volunteer-run, neighborhood-friendly firetraps organized by charities and churches. Now they’re mega-profitable stand-alone theme parks that take all year to plan, organize, and administer, and the people behind these largely independent business are fanatical about delivering full-body frights. Gore, controversy, adult themes, and some truly frightening ideas are their capital, and if anything, Keasler has created an impressive body of work that documents the fragile moment in an industry when it’s growing rapidly, but still really a labor of love. My guess is that within ten years, the majority of our marquee haunted houses will be corporatized and franchised, overseen by bean counters and some hired academic consultants who specialize in what scares us. 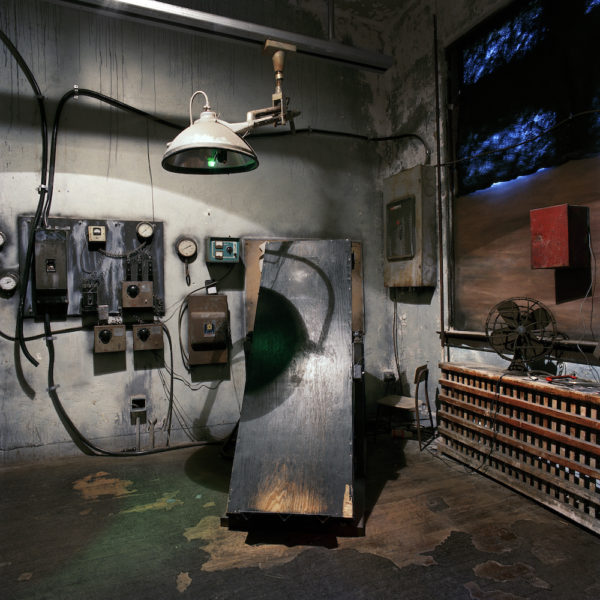 But for now, we’ve still got the big “haunts” created by the obsessive, the emotionally invested, the specialists, the true fans. Today’s big haunted houses are a perfect intersection of fantasy, horror, cosplay, set design, knowing theme-park kitsch, pop-culture narrative, and adrenaline. And while a photograph (even a big, juicy, beautifully composed one like Keasler’s) can’t capture the actual experience of being a paying customer running through one of these haunts, her cunning images of them — of their very details — allows a whole new level of voyeurism and analysis that I’m sure will be hugely satisfying for people who are longtime fans of haunted houses, along with those of us who are way too chicken to set foot in one. Keasler, like any great photojournalist or documentarian, took a deep breath and dove into this esoteric and unlikely subculture with her eyes and lens wide open. It’s a charming, surprising show. And as luck would have it, it will support multiple visits, much like a good haunted house can. You can go once and then go back again with your friends.

Keasler admits that she spends a lot of time deciding her next big project, which makes sense considering the time, expense, and equipment-laden travel required by each one. She’s already nationally known for at least two of her previous projects (there are more): her photographs of the themed rooms of Japanese love hotels, and her photographs of the human communities that live off of and service massive garbage dumps in developing countries. But Keasler is not a straight photojournalist; she’s not attempting any objective view. Her subjectivity, which is consistently savvy, is what gives her photos a charisma and power we’ve come to expect from great photography. This is photographer as an especially perceptive op-ed essayist, only done with pictures instead of words.

So with Haunt, Keasler understands there’s something there worth exploring that most of us are too scared or too rushed or too overwhelmed to take in. It helps that she herself wasn’t a huge fan of haunts before she got started; she simply understood that the level of dedication the haunt purveyors insist on throwing into their projects is intrinsically interesting on several levels — sociologically and psychologically — and that it throws up tremendous visual value, despite the fact that most of these scenes are, without a camera, too dark for the naked eye to comprehend. Keasler told the audience at her recent museum talk that she had to leave the exposure open on the camera for up to an hour in some cases. The resulting images are contemporary grand-guignol, which is marvelous fun. 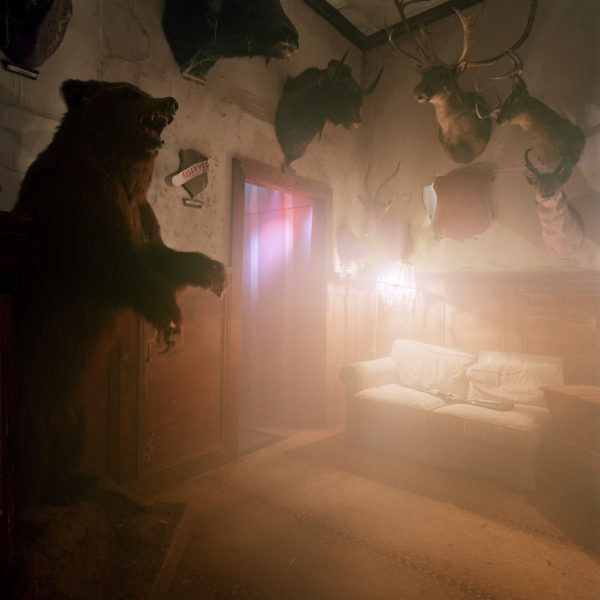 The haunt people know what gets to us. We Americans are still clearly in love with Kubrick’s The Shining, and Hooper’s Texas Chainsaw Massacre, and King’s It (as the current box-office can attest), and of course our serial killers. We still reference the gothic (more southern than European). We fear cults and secret societies, and mental institutions, and carnivals. We fear aliens, and vestiges of an oppressive Catholic church. We fear our own grand myths, and the backwaters and isolation of the deep south and wild west, and we feel guilt over our own geographic expansions and social experiments. Keasler’s images are of dank rooms and ornate buildings and outdoor installations that could well be stills from the set of this week’s streaming horror hit, but they get their extra traction from the fact that they were built, lovingly, for someone just like you to experience in person. If you want to. 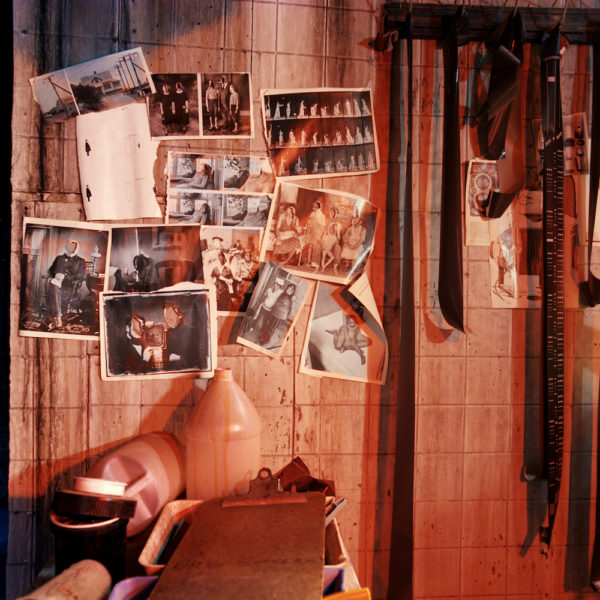 Like her Love Hotel images, a whole section of Keasler’s Haunt images are unpeopled. For the photos she took of the interiors and exteriors of 13 haunts across America, this works well, and especially since Keasler has a tendency to aim her camera just off of what may have been the focal point of a room or scene. Instead of centering on the dead body in the killer’s bed, she captures the killer’s bedside table, with its stack of dog-eared books, crooked lamp, dust, and handcuffs. Her photos draw a larger picture of just how obsessed the haunts’ creators are with narrative, and how thorough they are in making a haunt’s backstories complex and comprehensive. The audience may not be specifically conscious, for example, of the John Wayne Gacy-inspired narrative that shapes the 13th Gate haunt in Baton Rouge, but they likely pick up on more than they realize as they go through it, and what they’re picking up is incredibly upsetting. Through Keasler, we get a close look at the killer’s staircase strewn with trash and broken toys, his hair-raising “playroom,” and the dire, tricycle-dotted garage where he parks his blood-spattered ice-cream truck. Ugh. These haunt people are good, and through Keasler’s lens, we realize just how good. 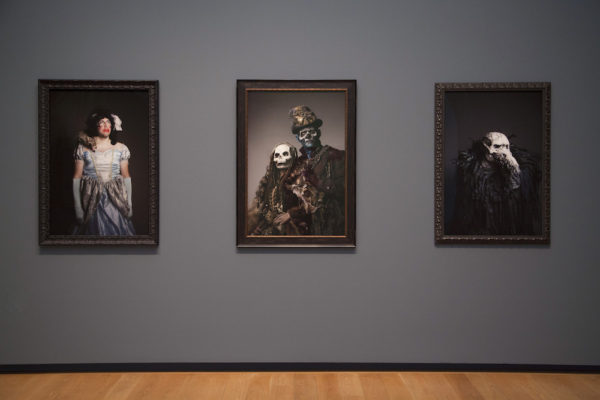 I’m partial to these photographs in the series, but I reckon a number of viewers will favor Keasler’s excellent formal portraits of the haunts’ players. This is the second, bonus part of an already convincing show, and we humans are certainly suckers for looking at humans — especially ones this compelling. The people who play the characters in these month-long, immersive, theater-of-terror plays approach their costumes with the same dedication you’d expect from people who’ve built the houses and sets. This is cosplay at the varsity level, and the resourcefulness and seriousness of the actors is a strange and gratifying (and startling) example of a true enthusiast’s ingenuity. We, the visitors, are allowed to dip in and out of this world, and leave it behind entirely come November 1. These people, you come to understand, are simply coming up with the next terrifying thing they can be, so they can scare you silly all over again next year.

I saw the show a few days ago. It shows the problem of showing at a serious institution like the Modern. There was a huge, obvious drop in quality moving from the collection to this show. It was ultimately not compelling and did not hold my attention. It would be a great show for a smaller institution. The Gilbert and George on the same floor is fantastic, though!

“As Kirchner notes, many of today’s special effects, technology and other Hollywood-level production techniques are possible because talent migrated from the movie industry to the haunted attraction industry (on at least a part-time basis) when CGI became more popular in films. ”

I agree with the OP, Damon. I feel that this show would have been quite successful somewhere less noteworthy.