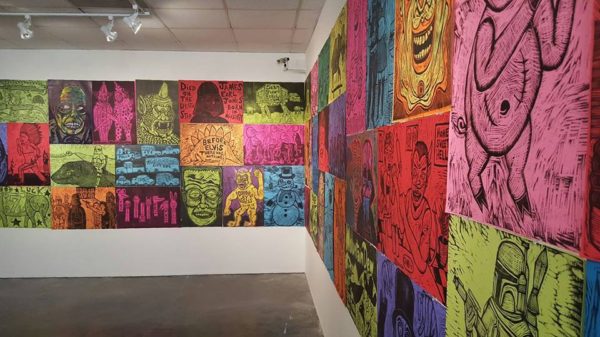 Walking into an exhibition of prints by Sean Starwars makes you feel like a kid again. Aptly titled Woodcut Funhouse, Starwars’ show at Houston Community College Central doesn’t have an anchoring theme besides the fact that all of the prints were hurriedly carved from plywood by an artist who takes his name from George Lucas’ brainchild. The woodcuts in the show come in three forms: printed on thin colored paper, printed on thick white printmaking paper, and printed on wood. The exhibition also includes painted woodblocks that could either be Starwars’ matrices or additional iterations of his images. 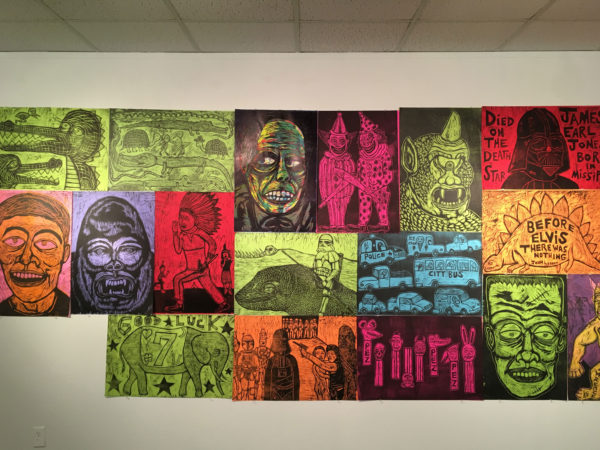 The jovial nature of the show is Starwars’ hallmark — an artist wouldn’t change their professional name to reflect a fictional universe if they didn’t have a good-humored and genuine appreciation for pop culture. In this regard, it feels like Starwars never really grew up. We know he’s not young, per say — his works are littered with images of Pez dispensers, Pac Man, and Atari consoles — but at the same time, his output and persona demonstrate a youthful energy. This is heightened by parts of his artist statement:

I choose the format of the large scale color woodcut because it best suits my energy charged, caffeine induced, aggressive approach to image making… I hammer out the carvings and blast out the prints, and move on to the next print, the next day.

Here’s the declaration greeting visitors to his Etsy page:

My woodcuts are carved from Russian Birch plywood using an assortment of Japanese gouges fueled by ice cold Mountain Dew with Guided by Voices always playing loudly in the background! 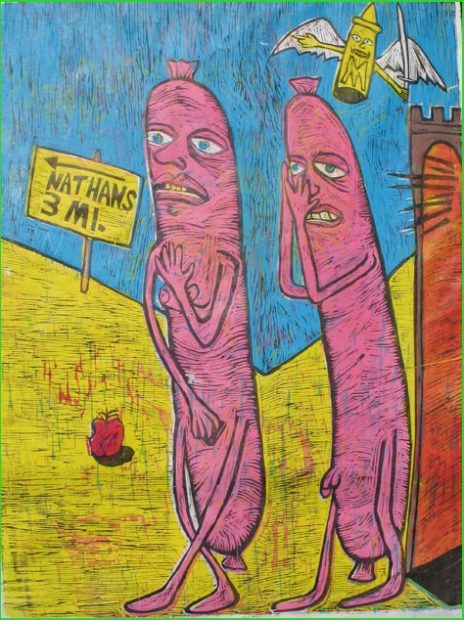 Starwars pulls out his art-school chops when it suits him. Though his multi-block woodcuts are at times misregistered, both his inking and application of color theory are always spot-on; he has good instincts. He also draws on and reinvents art history: Leonardo da Vinci’s Last Supper is transformed into a Sausage Party-like cannibalistic feast where hotdogs seated behind a table look skeptically at a haloed Jesus; in a more obscure reference, Massaccio’s Expulsion from the Garden of Eden is turned into a radiant walk of shame for two weenies guided by an angelic mustard bottle.

Partly the nature of his medium, and partly the artist’s desire to buck a polished aesthetic at surface level, Starwars comes off as a self-taught artist. His style merges the graphic nature of Warhol’s everyday objects with an autonomous art brut-style creation method that involves, as described in Raw Vision, “a spontaneous psychic flow from brain to surface,” that allows Starwars’ hot takes on our world to come on loud and fast. This outsider mentality is something Starwars thrives on — he is a member of the Outlaw Printmakers, a self-branded group of artists who rebuke academic methods of printmaking and the traditions imbued in the medium and instead create rough-hewn works that address backwater themes and situations. 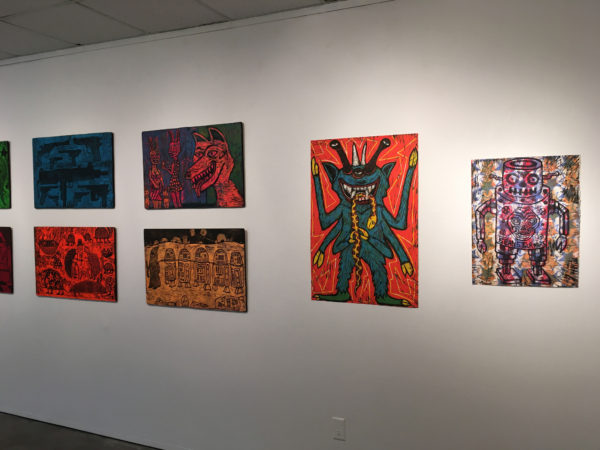 In Starwars’ work, you get exactly what you’d expect from a Laurel, Mississippi-based artist: melting ice cream cones, gators, wood-paneled interiors, and banjo playing goats are all reoccurring subjects. And this, along with his carnivalesque, cockamamie style makes him one of a kind — if he were working anywhere else, executing obnoxious numbers of woodcuts a year (as he is prone to do), Starwars would be just another workhorse not getting his due. When he emerges from the middle of nowhere, however, we can’t help but take note.