Doug Aitken at the Modern Art Museum of Fort Worth 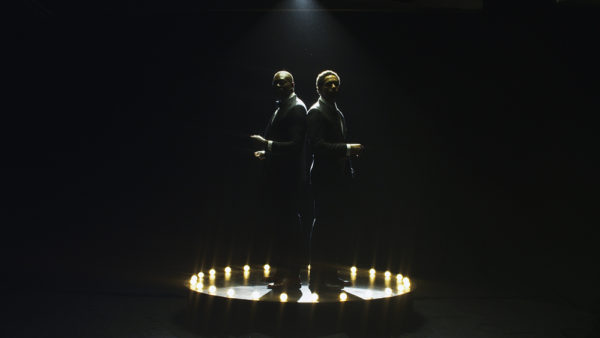 I’ve seen Doug Aitken’s retrospective twice now—once in Los Angeles at MOCA last November, and once last Sunday at the Modern in Fort Worth. There’s the theory that we tend to like things that are familiar to us, and I’ve been familiar with Aitken’s work since his solo video show of diamond sea at the Dallas Museum of Art in the late ‘90s (I wrote about it, glowingly, back then), but all this exposure hasn’t much warmed me to his work over the long haul. Overall I admire his ambition and determination to get the big things done — especially some of his video productions — but his work is uneven, and the Fort Worth show drives that point home. It’s a show I want to like more than I do. 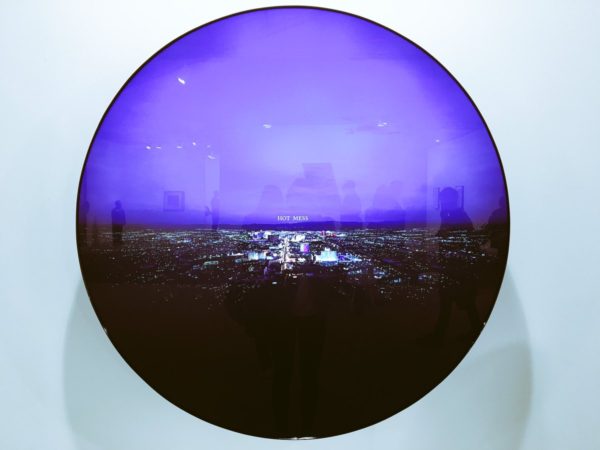 Aitken’s biggest problem is that his sculptures and wall pieces are so weak that they undermine his often excellent (if not iconic) video work. Even at the cavernous and unforgiving Geffen MOCA, which Aitken filled from corner to corner with work — including some installations that felt like overblown afterthoughts made for the space (though they weren’t) — I found myself cringing at most of his 3D work. Too much of it has the kind of “cool shit” thinness I associate with the worst impulses of Alex Israel and Wade Guyton. A big round lightbox of an LA landscape at night superimposed with the small words “HOT MESS” is just chum for dumb celebrities at a second-tier art fair, as is a big wall relief that spells out “1968” in cracked mirror. When an artist’s ideas are this bad it makes me look at even his best work with a skepticism I didn’t sign up for.

His recent project for Desert X, the art festival of site-specific work in the Coachella Valley in California, didn’t help this matter. Mirage was certainly one of the most popular of those installations, and I’m sure the most photographed, but in person it didn’t work. I visited it. The mirrors looked flimsy, buckled, and dirty; instead of creating a mirage effect it was named for, it looked like a collective of gung-ho art students had run out of money two-thirds of the way into realizing a not-so-original project. I wondered how an artist so occupied with slickness — in creating something so dependent on slickness — would sign off on such a thing.

So back to Fort Worth. I should mention that I have a lot of time for video art. I tend to like it, to cut it a lot of slack, to look for it, to crave it. My instinct, post-MOCA, was to rush past Aitken’s 3D work, interspersed throughout, and spend more time with his videos, and I did, but the show is notably compressed from the LA iteration due to space constraints. And yet it doesn’t improve because of it. I can’t remember the last time I walked through a lauded artist’s mid-career retrospective with such a lack of curiosity and wonder. Turning the corner into each new gallery at the Modern wasn’t an adventure, it was a hail Mary plea to some god that the next room was video and only video. Sometimes I got lucky. His best videos are very good. 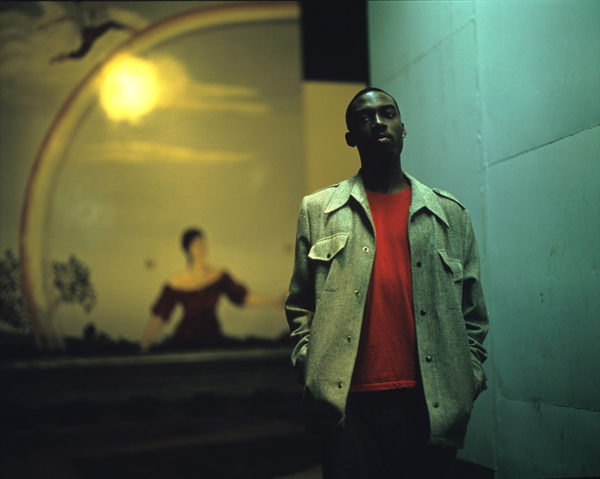 I think some of his newest videos work well, though the one that sticks with me the most, and did so from viewings in both cities, is an oldie but goodie. Electric Earth (which the retrospective is named after) may be Aitken’s signature piece. It’s from 1999, and it’s also a piece that doesn’t feel as tied to Los Angeles as the rest of the show. It’s multi-channel and installed in a sort of nonlinear stutter of opposing screens — this is also the rhythm of the piece itself, and it follows a lone young guy through a cityscape at night in what seems like an abandoned earth. He’s both of and not of this world, as he reacts to stimulation around him, and slips in and out of and dominates the frame. This has the cold, steely feel of an early New Wave film, or the earliest Luc Besson, or a precursor to the most sophisticated music videos that were made in the following decade. As a jittery, paranoid reverie, it’s completely hypnotic. And the soundtrack, which is part musical and part mechanical, is half of the trance inducer. But the work is electric, and queasy-making, and exciting. You sink into the night along with this young man, though it’s not clear if he would welcome any kind of wingman. I’d recommend Aitken’s show at the Modern just to catch this one. 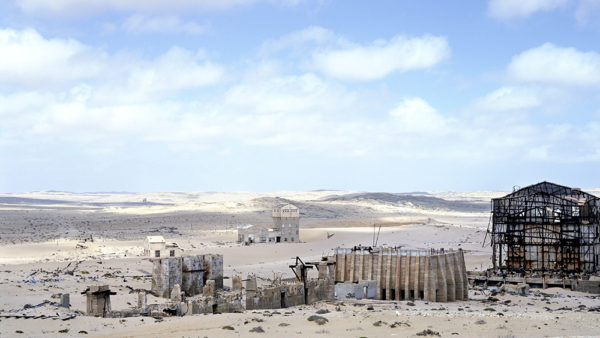 The aforementioned diamond sea, from 1997, is here, and it holds up pretty well. It’s an impressionistic and meditative portrait of a section of the Namib desert in southwest Africa that up to that point no artist or filmmaker (or really anyone) could get access to: the diamond mining of multi-national corporations had been automated for a long time by then, and most of humanity had left and been blocked from returning. The uneasy but working relationship between a particularly harsh, bloody capitalism and its politics and nature’s reclaiming of the land makes for great viewing, and would probably fare just as well as a minimally narrative documentary. Some of Aitken’s earliest tricks (the multichannel installation; the low, roaring and buzzing soundtrack; the time-lag spacing of images between screens) seems old-hand now among video artists, but in 1997 it was fresh and authoritative. I still like this one, though its stylistic tricks show some age.

I also wondered, as I do with other examples of Aitken’s videos, how well they would work on smaller screens or without multiple channels. This isn’t an entirely fair question given that much of what he shoots is meant for a certain size and format and only for that size and format. One recurring observation in a show like this, though, is that a good deal of the work’s authority comes from its scale. Song 1 is a giant video installation that was the first to greet you at MOCA and it is here, too (it worked better in MOCA’s boomy warehouse space), and its soundtrack is (primarily) different people singing — from minimally a cappella to maximally studio-produced — the song “I Only Have Eyes for You.” It’s lovely to hear, and the gorgeous video of the various performers (and other complimentary and quasi-narrative footage) is projected onto a huge, curved, surrounding screen. You can walk right into the center of the visuals and sound, sit down, and be part of it. It’s really the most glorified music video I’ve ever encountered, and it advances the argument that Aitken is more of a stylist than a storyteller. But it’s nice. It’s luxurious. 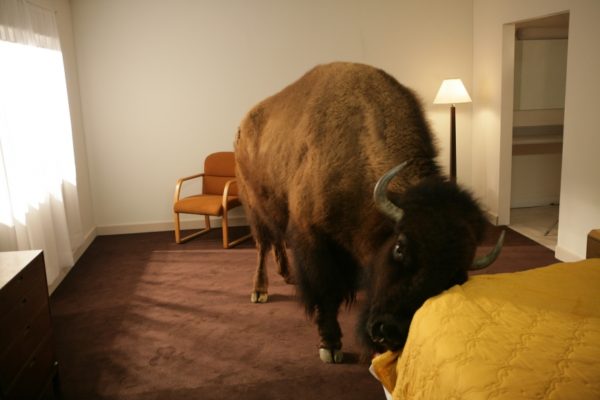 Another obsessed-with-scale piece is three billboard-sized screens (which are, like billboards, mounted on big steel beams); they cut formally through a big darkened space. Images of unlikely animals inhabiting hotel and motel rooms fill their screen surfaces front and back. A buffalo, an owl, a reindeer, and others — they are so beautifully and clearly rendered as they go about exploring their improbable and slightly worn human environments that the images pin you to the floor for a while. This is migration (empire) from 2008, and in this gallery, which is several removed from that of Song 1, you can still hear the easy, slow doo-wop of “I Only Have Eyes for You,” and so the David Lynch factor here is through the roof. Not that there’s anything wrong with that; it seems half the population is re-infatuated with Twin Peaks. Anyone as taken as Aitken is with Los Angeles, with the tension of noir, with the look and feel of cinema, with dreamy hazes of time and mood — and the connections and missed connections of humanity, and the brutal inevitability of nature and entropy — is bound to evoke the seemingly ever-present Lynch. We call that Lynchian. And I’d argue that at this point we can also call the video works of plenty of Aitken’s artist progeny “Aitkenian” — and perhaps they’d do well to stick with making videos.

At the Modern Art Museum of Fort Worth through Aug. 20

Re- the videos, for the benefit of anyone who hasn’t seen them or has seen them just briefly, I’d just like to clarify that (imho) they suggest meanings susceptible of sustained, in-depth unpacking, as well as being beautiful and atmospheric.

I haven’t seen other the other big Aitken shows Christina refers to, but for me, this one was thrilling.