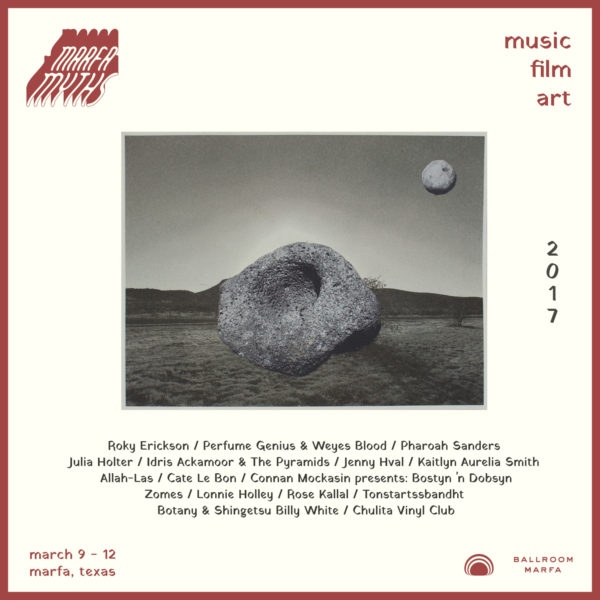 Marfa Myths is officially returning for its 4th year of music and art in the hight desert of West Texas. The four-day festival, put on by Ballroom Marfa and Brooklyn-based music label Mexican Summer, will run from March 9th to 12th and feature performances at venues across the city, including Ballroom, Wrong Marfa, and El Cosmico. And there aren’t just musical performances—on the first night of the festival, Ballroom curator Laura Copelin and poet Eileen Myles (who is a featured speaker in Glasstire’s upcoming OFF ROAD speaker series will co-host a “Dirty Gay Movie Night” at the Crowley Theater.

Marfa Myths also hosts music and art residencies during the festival that result in limited edition recordings and the annual Marfa Myths journal. This year’s artist-in-residence is Matthew Craven and the musicians in residence are Gustav Ejstes and Reine Fiske of the Swedish band Dungen and Jeremy Earl and Jarvis Taveniere of Woods.

See the full lineup below. For more details on the festival and to buy tickets, go here.