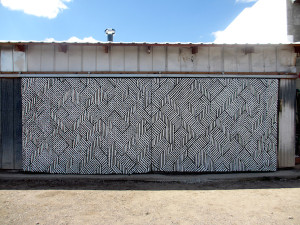 The massive SXSW in Austin has led to a number of smaller overspill festivals in other Texas cities eager to take advantage of so many music acts passing through, and last weekend Marfa enjoyed its second annual Marfa Myths festival, organized by New York record label Mexican Summer and Ballroom Marfa. Globe-trotting musician/artist Grouper was one of the dozen or so acts in the international festival lineup and has stayed on in Marfa to create an outdoor mural on a wall in the Lumberyard.

Grouper (Liz Harris), got to know Marfa during a music residency there in 2010, and splits her time between making music and making art. She tells blouinartinfo that this mural is ” mainly improvised;” it’s a long wall of blocks of lines set in a diagonal weave pattern, painted in black and white. The plan is for the mural to be semi-permanent. To read more about her process and inspiration, go here.