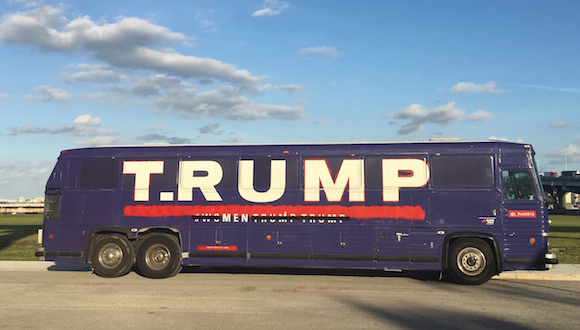 It was recently reported by Hyperallergic that the artist collective T.Rutt was informed it will no longer receive free exhibition space for its Donald Trump protest bus at the Red Dot Fair in Miami. The artists behind the project, David Gleeson and Mary Mihelic, received an email a day after the election from the fair’s president, Eric Smith, stating that he was rescinding his offer to host the duo: “In light of the surprising results [of the election], I’ve decided to pass on both the bus display and flag. I trust you understand.”

Of course, the bus Smith is referring to is a former Trump campaign bus that the two artists found and repurposed into a roving political protest project. The flag is a more recent artwork, for which the artists sewed words from Trump’s leaked Access Hollywood tape onto an American flag.

In a phone interview with Hyperallergic, Smith called his cancellation of T.Rutt’s project “a business decision,” saying that he was “always iffy about it.” He went on:

“[T.Rutt] has a limited budget, and they’d asked for a [free] place to park the bus. Then I saw the flag project, which had some pretty derogatory words embroidered on it. The P word and ‘fuck’ and ‘shit’ and stuff on the flag. It just offended me. After a while, I thought it wasn’t worth my while. It’s kind of past news.” 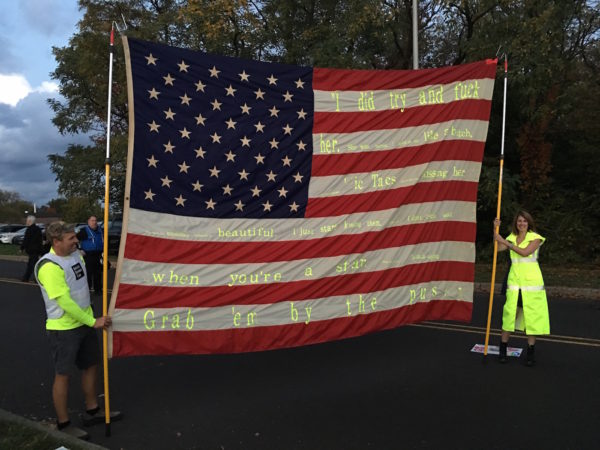 Smith did contact T.Rutt and tell them that they would be welcome to the fair if they, like other galleries, paid a booth fee. The collective is now looking for another place to display their work, but have valid concerns about the future of the art world at large:

“After all this, we do not think the top-tier of the art world will show anti-Trump protest artwork inside the USA under the Trump administration. If the initial reception of our anti-Trump artwork in Miami is any indication, it seems unlikely that the top-tier galleries, dealers, and fairs will take that risk under Trump.”

This is disappointing. Art is meant to be one of the most sacred places for free speech. If art cannot reflect an artist’s point of view or be a reflection of our society, then what is it good for? Very disappointed in Red Dot Fair for not representing the authenticity and freedom of expression in the art world.