Using Art to Protest Family Separations on the U.S.-Mexico Border 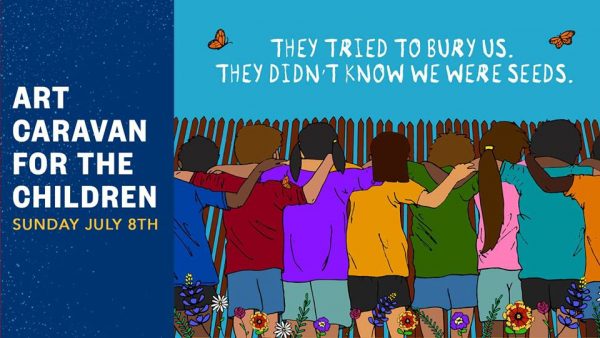 This Sunday, July 8, 2018, the Texas-based civic engagement organization Jolt Texas is organizing a caravan from Austin to Brownsville with the goal of using art to protest family separations on the U.S.-Mexico border. In its “Art Caravan for the Children,” which will occupy Brownsville’s Alice Wilson Hope Park (1300 E Levee St.) from 2-4PM, a group of Latinx youth, artists, and allies will paint a mural on canvas aiming to show the Latinx community’s social and political influence. One of the goals of this rally is to help organize Texas’ Latinx population around issues relevant to its community, and to turn opinions and words into political involvement in the upcoming midterm election. The event will also feature screenprinting and art-making opportunities, a mariachi band, and community speakers talking about the U.S. government’s family separation and immigration policies.

Jolt’s event is a direct protest to the Trump administration’s “zero-tolerance” policy on border enforcement that was announced this past April. Because the Justice Department decided to criminally prosecute every adult caught crossing the border, and because children cannot be held in standard immigration detention centers for more than 20 days, the administration has separated families. President Trump recently signed an executive order reversing his policy on family separation, instead saying that families should be detained together. By doing so, he asked Attorney General Jeff Sessions to obtain a court order allowing children to be held in detention centers for longer than 20 days.

This zero-tolerance policy set in motion a number of protests on the issue, many of which happened on June 30, 2018. And although the administration claimed that some minors have been reunited with their families, they recently admitted that there are “nearly 3,000 children who are still in federal custody.”

In a statement to Glasstire, Jolt Texas commented on why it felt the need to organize an event using art to protest family separations on the U.S.-Mexico border:

“Families make the journey to the United States seeking refuge and a better life for their children that is free from violence. Instead upon arrival they are faced with the inhumane and horrifying policy of this administration that tears families apart. Jolt seeks to fight back against this latest attack on our community with an uplifting event centered around Texas’ southern border that shows our community’s unity and electoral power. This action will incorporate art, music, and our culture in a way that shows the strength of Latinos across Texas and that this administration cannot stop the inevitable. Latinos will become the majority in Texas despite any number of anti-immigrant policies that are implemented by our state or federal government. And Latinos will show that strength at the polls. Immigrant rights matter to young Latinos in Texas, because 53% of Latinos under the age of 30 in the state have a parent that is an immigrant. We are working with Latinx artists to create an installation that plays on the quote “They tried to bury us. They didn’t know we were seeds” and illustrates the strength of our community to rise together.”