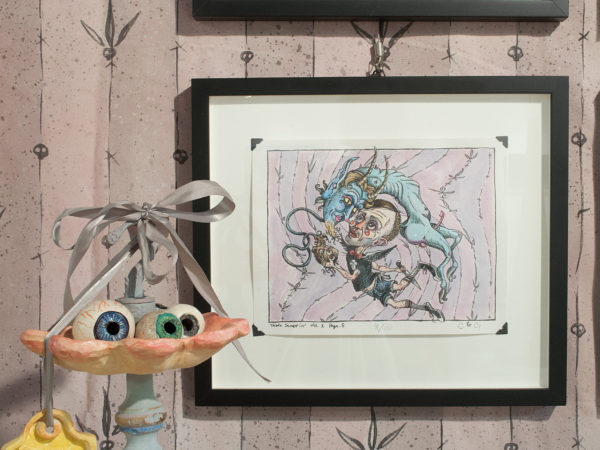 Members of two Fort Worth art collectives—Bobby on Drums and Exhibitionists—recently joined forces to establish Art Tooth, which they describe as an “artist-run, hybrid gallery project that uses a digital and pop-up platform to make invigorating art accessible.” After successfully mounting several pop-up shows in Fort Worth, their first exhibition in a dedicated art space is currently up at Gallery 76102, the Fort Worth satellite gallery of University of Texas at Arlington. As a play on the name Art Tooth, the group’s first official gallery offering is called Amuse-bouche. Sheryl Anaya, Chuck & George, Erika Duque, Dannie Liebergot, Shelby Orr, and Tiffany Wolf Smith are the featured artists, and the premise of the show is to examine how each artist interprets their personal and local environments. 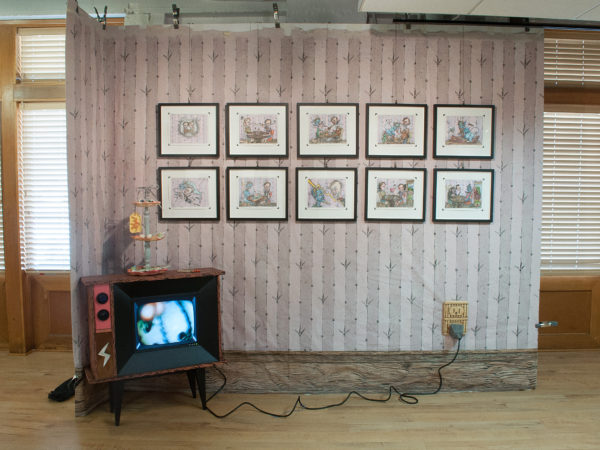 Dallas artists Chuck & George (Brian K Scott and Brian K Jones), known for wicked humor, present a send-up of domesticity in their tableau titled Table Scrappin’: Bits and Pieces. Their installation establishes its own domestic space by setting off a false wall in the gallery with handmade wallpaper attached with clamps. This wall forms a backdrop to their constructed vintage TV, wall outlet and baseboard and a series of framed prints. This series of ten hand-colored letterpress prints depicts the two protagonists interacting with stuffed bears and food at a kitchen table in grotesque scenes reminiscent of commedia d’arte characters merged with Marc Chagall’s flying figures. The tableau is completed with the TV’s animated display of the print images, and a tiered ceramic serving plate that proffers eyeballs. 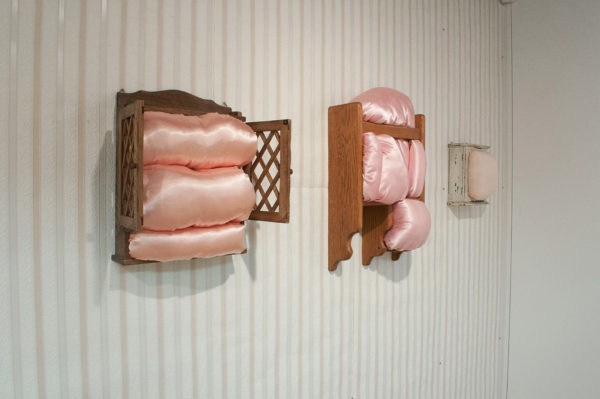 Tiffany Wolf Smith also uses a wallpaper backdrop to reinforce domestic notions—in this case, a deconstruction of wedding and homemaking rituals. Her mixed-media piece incorporates found objects with the fabric from a bridesmaid’s pink dress. Fragments of the bodice are displayed on the wall, suggesting that the bride (or her maid) has been stripped bare. The virtual striptease reveals false padding inside the dress’ bustline, tying into conventions of artificiality and enhanced beauty. Other pieces of the satin dress have been cut up and stuffed like pillows into found wooden cabinets. The cabinetry, with its overstuffed maternal elements, evokes several things at once: the accumulation of material possessions in a bridal trousseau, the swelling form of childbearing, and the confining nature of domestic partnerships.

Several of the artists present more literal manifestations of place. Dannie Liebergot, a Fort Worth-based artist, did an artist residency in Iceland following her graduation from UNT. Her experience is revealed in her photographs of Icelandic locations defined by cold and snow. Her images conjure real sensations as well as a sense of entrapment. One feels the heaviness of snowflakes silently blanketing the land in Blizzard in Siglufjörður, as well as the volcanic forces that gave rise to the land itself in Snow Covered Lava Field 1. 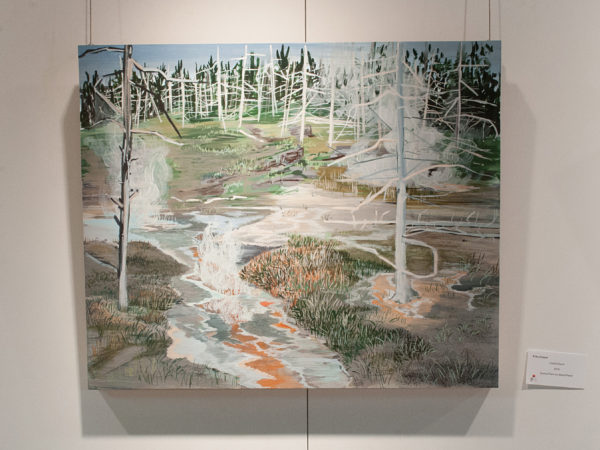 This suggestion of fiery creation of place carries over into two of Erika Duque’s paintings of a landscape filled with a steaming geysers, as in Grand Geyser. Duque’s painting Grand Geyser Part II combines the representation of the atmospheric effects of the geyser together with her semi-abstract rendering of trees and other landscape features. The freedom in Duque’s painting approach is refreshing. Duque is a native of Flushing, Queens and currently lives in Fort Worth. 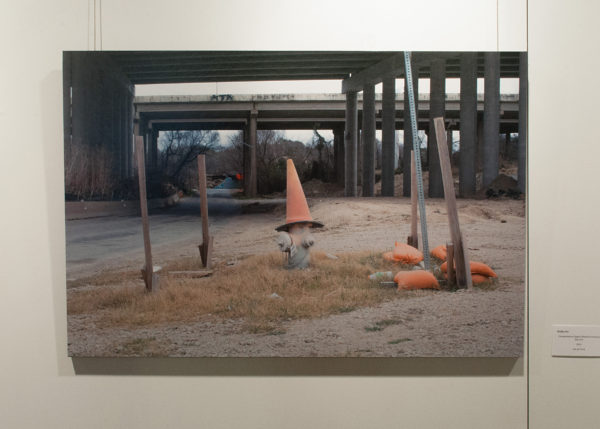 In Fort Worth artist Shelby Orr’s photography, ordinary objects take on heightened significance through her imagined narratives. A traffic cone jauntily poised on top of a fire hydrant, surrounded by a circle of construction stakes becomes a Consecration of Space (Wizard Ceremony). In Ladies, the artifice of posed female manikins is further transposed through their reflected images captured in store windows. Orr’s work was recently included in the 2016 Berlin Foto Biennale. 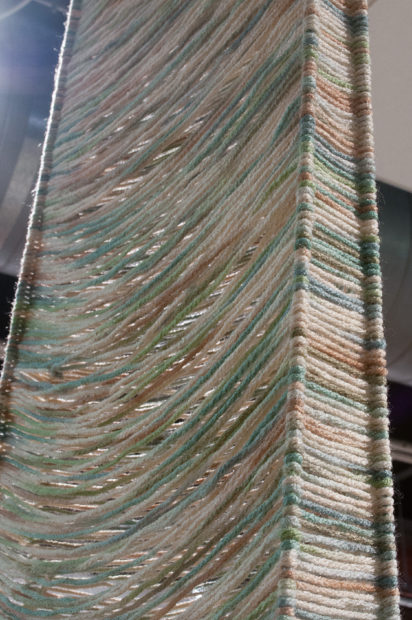 Sheryl Anaya, I want a place that feels like home.

The vertical form of Sheryl Anaya’s acrylic fiber installation in the center of the gallery serves as a visual anchor for the overall show, even as it defines its own specific interior space. I wouldn’t go so far as to say that the woven piece is “rife with intimacy and emotion” as the introductory panel insists, but the understated formal simplicity of Anaya’s work is certainly enhanced by its tactile appeal. Anaya is a native of Puerto Rico and currently lives in Dallas.

Overall, Amuse-bouche is a well-rounded selection of artists, and several sales resulting from the show suggest that Art Tooth achieved one of its goals to connect artists with patrons. As staged by Art Tooth members Aimee Cardoso, Shasta Haubrich, Dee Lara, Brandon Pederson, James Talambas and Jay Wilkinson, Amuse-bouche seems to have succeeded in whetting the appetite of its audience for contemporary art and in reinforcing Fort Worth as an art destination.