Make the Tech Work For You: ‘Array’ in Dallas

by Colette Copeland May 15, 2018
FacebookTwitterEmail 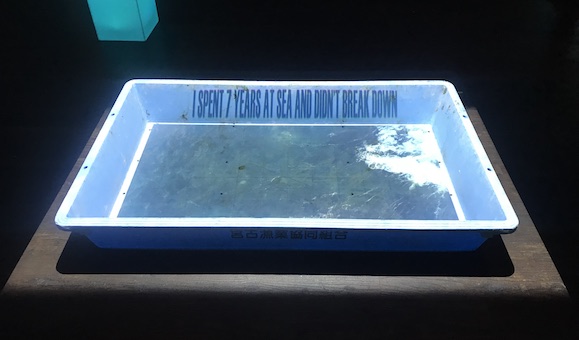 Array was a one-night visual art and musical collaboration event in Deep Ellum in Dallas, part of the larger three-week long Soluna International Music and Arts Festival, which focuses on merging classical and contemporary music with arts and technology. As a multimedia video artist, I’m always interested in how artists use technology to create innovative sculptural installations. A few challenges that new-media artists face include expensive equipment requirements and technical expertise in both installing work and maintaining the work during an exhibition, as well as lighting (or a need for total darkness in an otherwise lit gallery space). Capital One was a major sponsor for this event, so I hope the event’s artists and curator received some funding for their respective commissions. Canton Hall was a perfect setting for this event — a dark club venue with enough light to safely maneuver throughout the space without compromising the integrity of the video and light works. (Similar to Aurora, but on a smaller scale.) Curator Erica Felicella chose ten local artists to create multi-sensory, immersive works specific for this event.

One of my criticisms of some new-media work, as shown in large public spaces (like Aurora), is the emphasis on the technology as the driver for visual experience. In other words, the technology seduces the viewer, providing a stimulating “eye candy” visual, and sometimes an immersive experience, but one that’s conceptually vacuous. The Array artists exceeded my expectations. Most of the artists that I spoke with were using technology as a tool in their investigations into larger conceptual issues relating to culture today. 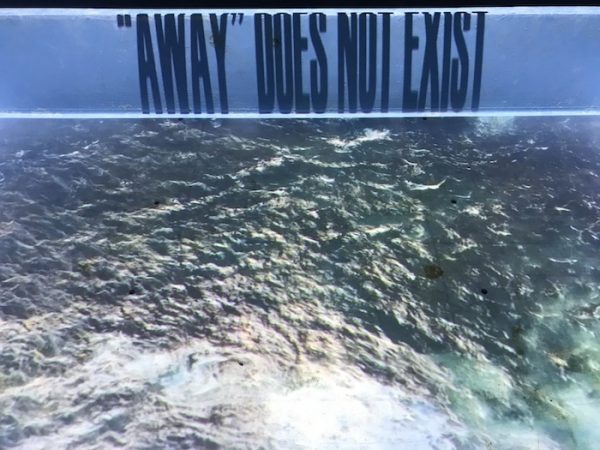 Jeremy McKane’s Life Support. His practice focuses on filming the world’s oceans and raising awareness of marine plastic pollution. The video is projected into a vessel that traveled in the ocean for six years as a result the Japanese Tsunami. 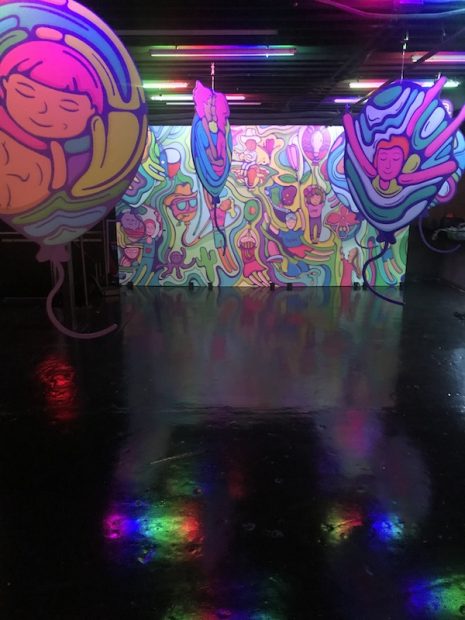 Alejandra Camargo’s Happy Thoughts. Her trippy, psychedelic Pop-inspired work explores the “Energy of Happiness,” with the premise that emotions can be transferred from one entity to another. Perhaps this can diffuse some of the negative energy surrounding all of the President’s tweets. 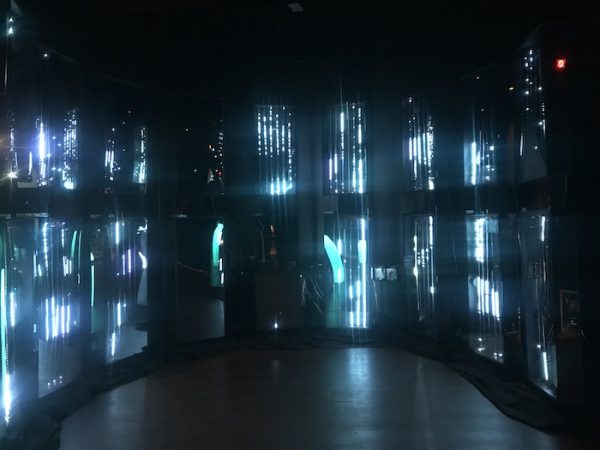 James Talambas’ betweenthenow. The artist collaborated with members of the Dallas Street Choir. He shared with me his own experiences of being homeless. The provocative, haunting vocals resonated strongly in this work. 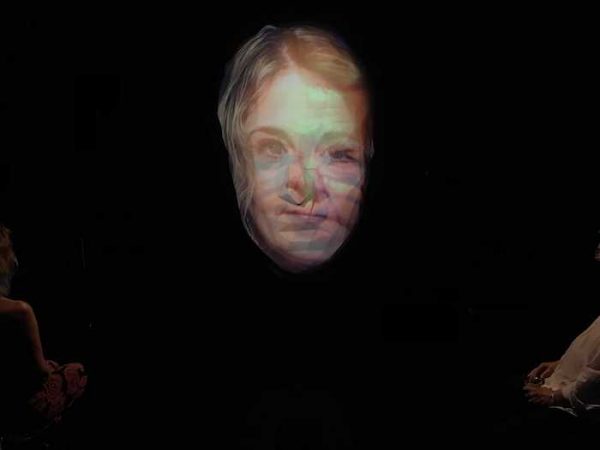 Eric Trich and Jordan Castilleja’s Partial Personality.  Two viewers sat in chairs and tried to align their faces with live video feed. While the artists’ intention is to comment on the construction and manipulation of identity through social media, I experienced the work as the desire to merge as one with another person. 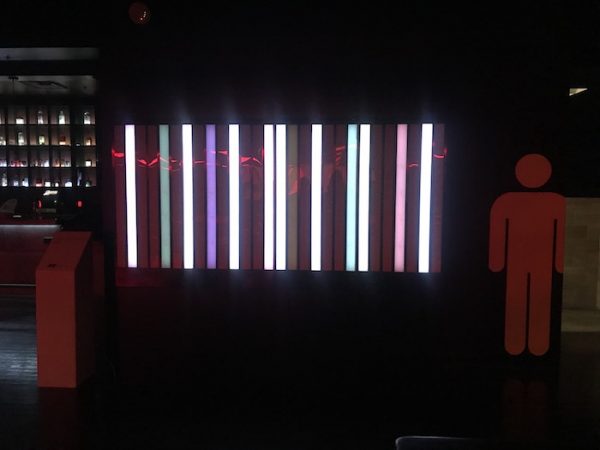 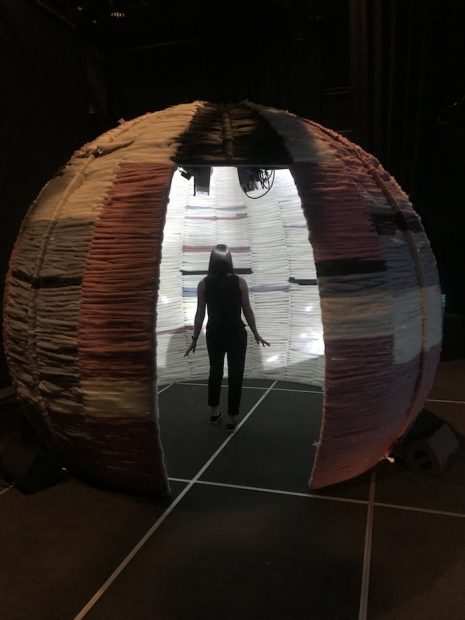 Sheryl Anaya’s Good Way Off. A woven hut with video-projection mapping and sound, evoking themes of memory and loss. I appreciated the juxtaposition of the laborious hand-work of weaving with the digital technology. 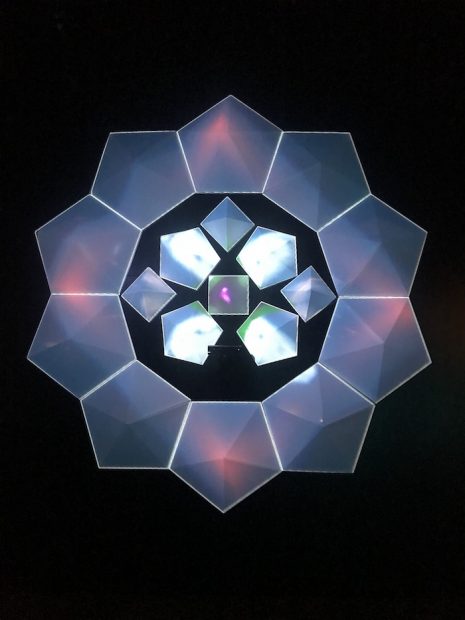 Carmen Menza and Mattheiu Brooks’ Staring at the Sun: Origami-inspired sculptural form/projection surface with video of shifting geometric patterns triggered by viewer movements with an original soundscape. It was interesting to note that the sculpture attached itself to certain viewers and was reluctant to respond to just anyone.

Please note: Given the personal nature of the experience, I was not able to document Tramaine Townsend’s Virtual Reality work. Acclaim is a piece of 360-degree VR new animation. I didn’t want to leave him out, so I mention him here.

‘Array’ took place on Saturday May 12th at the Bomb Factory and Canton Hall in Deep Ellum, Dallas