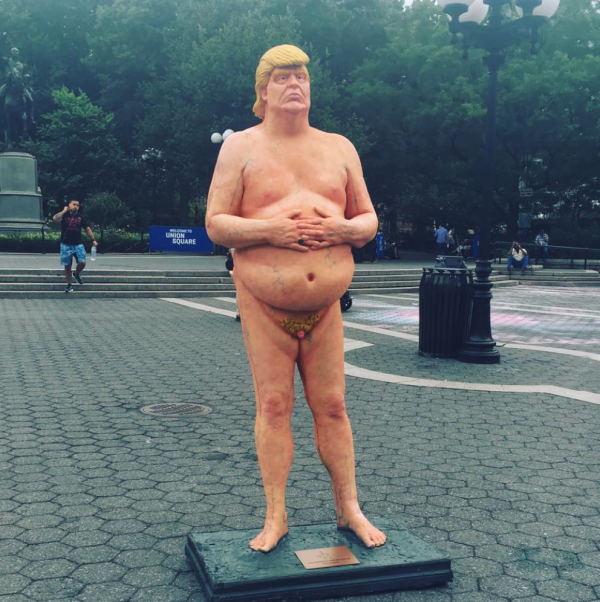 Identical life-sized sculptures of a very naked Donald Trump have cropped up in NYC, Los Angeles, San Francisco, Cleveland and Seattle. It’s a selfie bonanza! Stylized but also-kinda-accurate, the statue lacks balls, is a sickly pinkish-orange, and has (of course) smallish hands. The pubes are blonde, so the creator is giving Trump the benefit of the doubt (to say the least) in the carpet matching the drapes.

Here he is in the Castro. 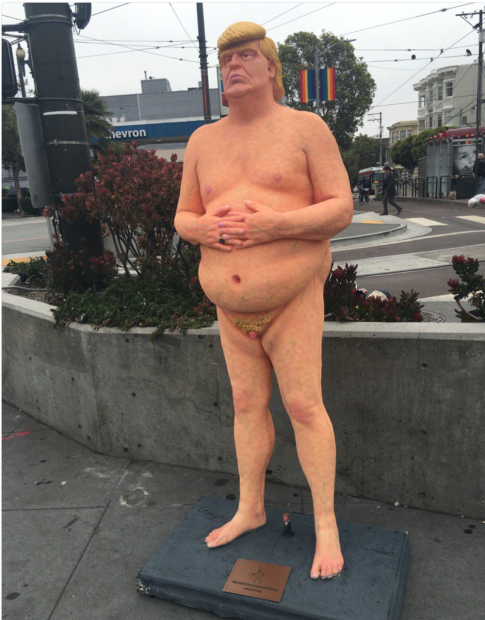 The works were commissioned by (via Huffington Post) “an anonymous anarchist street art collective” who calls itself Indecline. Past actions by the group include “putting the names of black victims of police brutality on the Hollywood Walk of Fame.”

The artist (who was commissioned and is not a member of Indecline) is out of Las Vegas and is named Ginger. Ginger typically creates monsters for haunted houses, and for Trump used hundreds of pounds of clay and gave him what Ginger refers to as a ‘constipated look.’ Ginger says: “Trump is just yet another monster, so it was absolutely in my wheelhouse to be able to create these monstrosities.”

Says Indecline: “We decided to depict Trump without his balls because we refuse to acknowledge that he is a man. He is a small arrogant child and thus, has nothing in the way of testicles.”

For more images and a video, go here and here.

Couldn’t get a job with http://www.syfy.com/faceoff ? It’s ok, do Soros next or bill having oral sex with HillLIARy maybe?