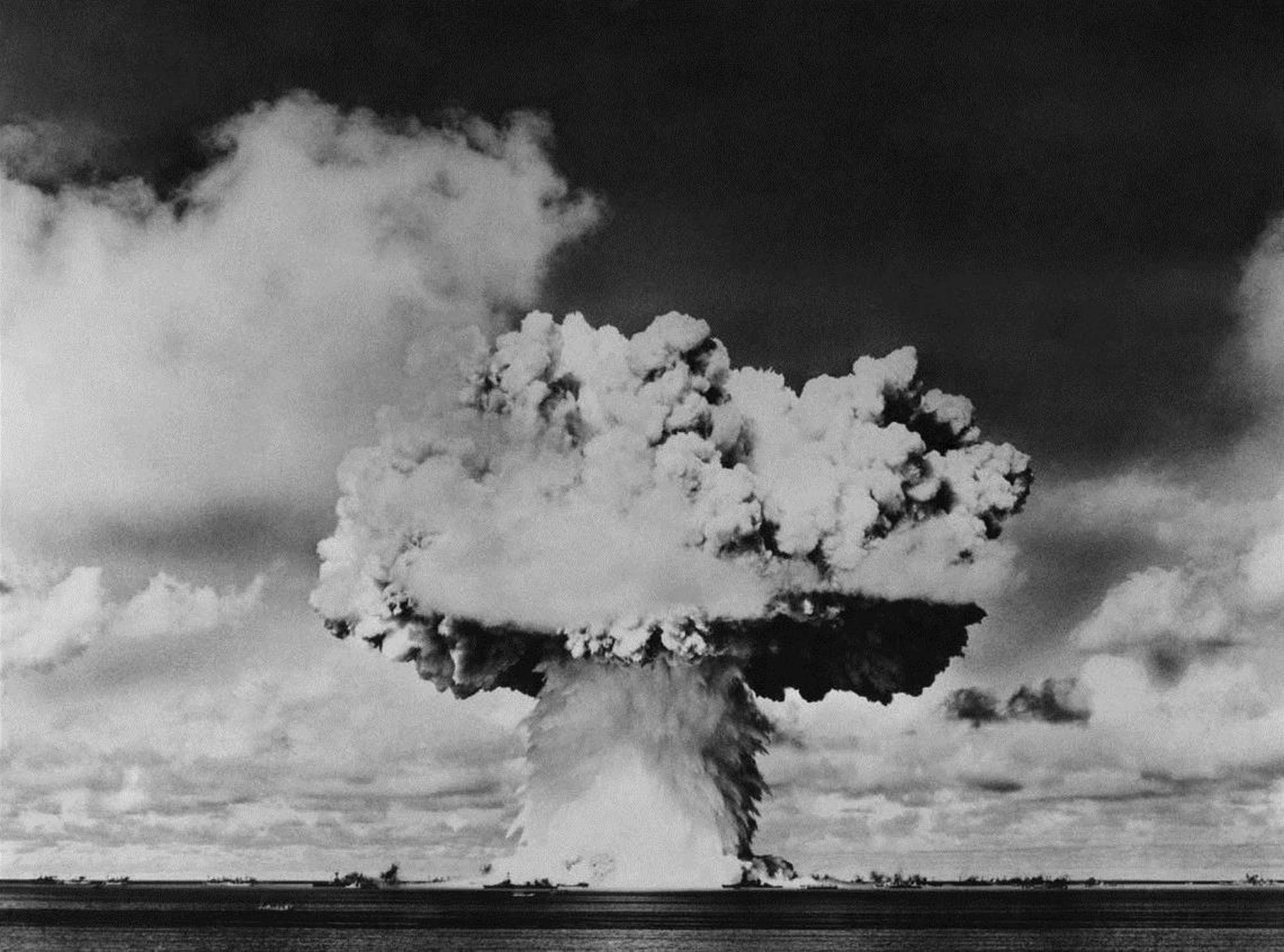 I went to the still-newish Whitney Museum in New York City two days ago, and at the end of my visit of its current exhibitions, I walked into a darkened screening room showing Bruce Conner’s 1976 film CROSSROADS. It’s 37 minutes long; I started it in the middle. There were about 20 other people sitting around in the cavernous space (the screen is appropriately huge to convey what CROSSROADS has to show us, which is a real nuclear bomb explosion, over and over), and at first I was just grateful to finally see this important work that I missed when Conner had a recent retrospective at MoMA. I knew about CROSSROADS, but I wasn’t prepared for it—not even after sitting through a the whole screening of Hito Steyerl’s dystopian Factory of the Sun, just around the corner.

Let’s contextualize this a bit, though: Headlines right now are sickening. This past week has been one giant, crazy-making kangaroo court for the concerned citizens of United States of America and the world, and it likely won’t let up anytime soon. The rage so many of us are feeling is coalescing even in the afterglow of the buoyant January 21st mobilization of civil society. Last week, when Masha Gessen, a beleaguered and tireless Russian-Jewish journalist told Samantha Bee that the worst-case scenario facing the planet in the wake of Trump’s election is “nuclear holocaust,” she wasn’t kidding, and she wasn’t saying something that hadn’t already crossed millions of minds. When Vanity Fair runs a story about how quickly technologies are surfacing that would allow even a basement troll (or Russian fake-news generator) to resort to trickery that could spark a world war (and you can watch exactly how this can be done), the thing that Conner unearthed and turned into a public-service-announcement-cum-artwork is that much more terrifying. And it is terrifying. CROSSROADS shows us multiple camera angles, in varieties of slow motion, of the Bikini Atoll nuclear testing that happened in 1946, and if you’ve forgotten what the power of a full-blown atomic bomb looks (and sounds) like, here it is in spades.

At one point, as the movie started back up and got going, a couple of well-meaning middle-aged women came in and sat down next to me, and since every mass explosion that plays out is preceded by a few moments of a placid black-and-white scene of battleships circled up and waiting, I knew to brace for their first encounter with Conner’s bomb. It does make you gasp and your hair stand on end. The bomb went, and as it surged up the wall in front of us and threatened to swallow the room, one of the women turned to me in panic: “Is this real footage? Did this happen?”

I don’t know how much of CROSSROADS you can watch online, pirated or not, and unlike an earlier praise I made about a Conner work, here I don’t recommend seeking it out on your own. There is a hypnotic majesty to the onscreen horror that couldn’t possibly be captured on a smaller screen, and to boot, about half the film is Moog-y music scored by Patrick Gleeson and Terry Riley, creating a kind of heightened-tension, audio-visual ballet in the manner of some of Kubrick’s most lingering spectacles. When the music cuts out to reveal the sound of an actual explosion—at times on a several-second delay to reflect the real-time sense of light traveling faster than sound—it comes as neither relief or reassurance. It simply is. This is a canny work where Conner, who had to lobby the government to get the footage (which was shot from planes, ships, helicopters and the like), used his most uncompromising instinct to capture a rhythm of destruction that words can’t really describe. The art is in the splicing. He didn’t need to create any other effect to get the point across.

But here’s what’s so compelling about this destruction on so many levels in our present day. Some people crave destruction—thrive on it—and reportedly this footage was indeed used as propaganda by the military following the tests: the spectacular sells itself. Power sells itself. For many, the thrill of gaining absolute power (or the fantasy of gaining it) has of course its darkest flip side in that it happens at the (often dire) expense of others. That’s the point.

And here we are: Whether or not Trump’s (or Pence’s, or Ryan’s) presidency ends in a full-scale nuclear war, my generation and plenty of others’ are seeing the wholesale destruction, in real time (and from multiple angles), of social contracts and self-evident truths we once took for granted. Waking up in the morning and closing one eye while tuning into whatever news source you use is much like sitting through Conner’s CROSSROADS. The nausea kicks in and lasts the rest of the day, the week, the year. This isn’t art imitating life. Conner’s vision is art synthesizing real life in perpetuity—in 1976 and in every year (and every venue) it’s been screened since then. No matter how small or specialized an audience is at the Whitney in 2017 compared to the wider population, the movie creates a witness-bearing moment in viewers that resonates. And we need as much of this kind of art as artists can bear to create, to the point of exhaustion.

They’ll have to be resourceful though. Because by the way: the National Endowment for the Arts underwrote CROSSROADS. See where I’m going with that?

The Whitney’s New Logo: Designers Watching Too Much...

I had a trippy experience watching “Crossroads” at Bruce Connor’s MOMA retrospective. I kept thinking about the atomic mushroom cloud being inverted in the 21st century into the rumble of 9/11. Very unnerving indeed! I still think about every week.

Along the same lines, Isao Hashimoto’s “Time Lapse Map of Every Nuclear Explosion Since 1945.”