I’m watching an artist fail because his medium has changed around him and he seems completely unaware of it. He’s failing because he undermines his intention of projecting himself as assertive, competent and powerful—he can’t adapt to the fact that now he can’t control how his work gets viewed. He’s failing because his art has moved to the internet and he doesn’t have final say as to what gets seen or how we see it.

His work started in a branch of photography known as the photo opportunity or photo op. Merriam-Webster defines the photo op as: a situation or event that lends itself to and is often arranged expressly for the taking of pictures that give favorable publicity to the individuals photographed.

He managed to incorporate video later in his career, in the guise of a network television program. Essentially, with the staging, filming, editing, and post-production polishing of his video appearances, this was an extension of his original act—it was an hour-long photo op. We still saw him as he wanted us to see him.

But now, this artist’s problem lies with the fact that we can see the processes; he’s a magician whose curtain has been opened, and we see behind the scenes. We see how the photo gets staged and created, and it’s ugly. There is no magic. His previously desired and achieved effect is revealed as an illusion.

Take the following image. It works perfectly for a story in a newspaper or weekly news-magazine. This is photo op 101. 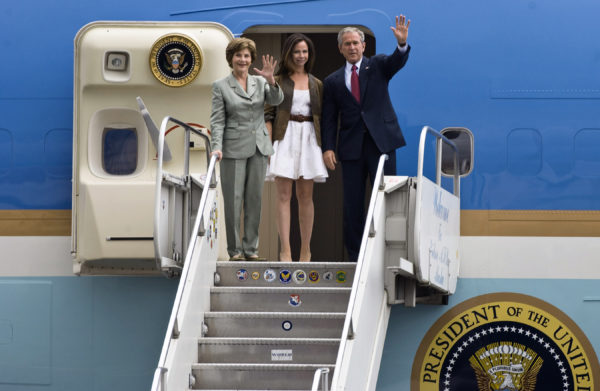 An American President waves as he boards Air Force One for a trip. He looks the part; he’s off to get the business of the county done. The favorability of the image reaches a higher level simply by arranging his wife and daughter into the frame: a responsible family man in a loving relationship, as proved by the appearance of his spouse and progeny.

Let’s turn our attention to another President attempting the same photo-op. 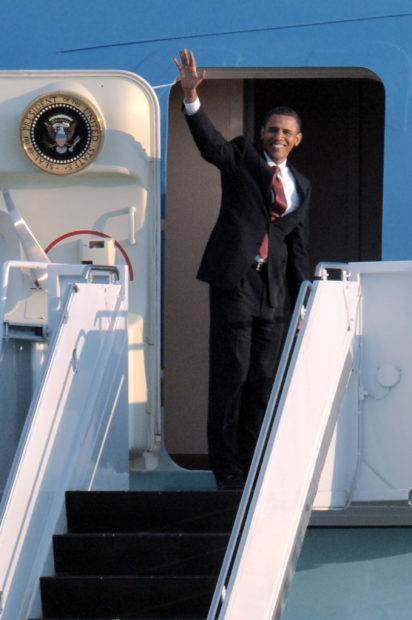 Again, looks confident and in control. However, you’ll note the lack of family or assistants; this could possibly diminish the favorability of the image. Nonetheless, here it works. Family (props) are replaced by his natural, easy smile. Happy people get things done—otherwise, why are they so pleased? This comes from a skilled photo op maker.

Now I offer the following image. 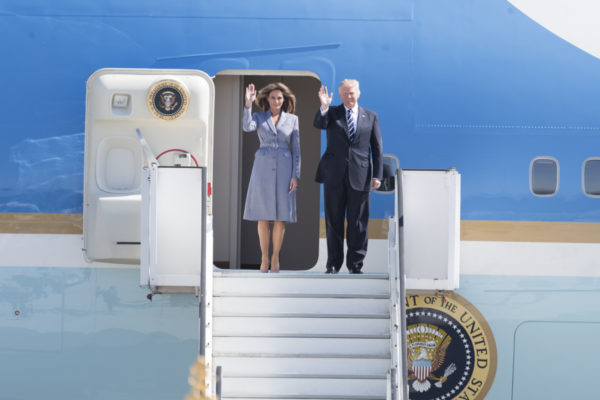 A little stiff perhaps, but the current President manages to look the part. Including his spouse helps soften his image and raises the favorability in this photo. Having the backdrop of Air Force One helps tremendously. No real difference from the previous images.

Here we see the things that the photo edits out, what’s left out of the frame. Here we see the optics of a trophy wife and an artist who apparently isn’t worth holding hands with, even in public, even on the clock. Not a very presidential look for the artist.

(A gif of course is a very brief and concentrated snippet of a video—sort of like a sports re-play, if you will.)

The power of this gif undermines the staged photo op so thoroughly that any future Air Force One photo of this President instantly calls to mind the First Lady avoiding his touch. Notice that the photo posted above isn’t even the same location as the gif. The gif image occurred in Italy, while the photo was taken in Belgium.

In isolation, in the above gif, the argument could be made that it was simply poor timing for the couple and Melania was adjusting her hair. But that video clip appeared shortly after another:

Again, this video of the couple walking on a red carpet sets the stage of any photo op. But we see behind the curtain, we see the set-up, and the spouse is not cooperating—at least not up until the official photo is taken.

Let’s shift focus to the most obvious failing in this artist oeuvre: the NATO summit in Brussels. 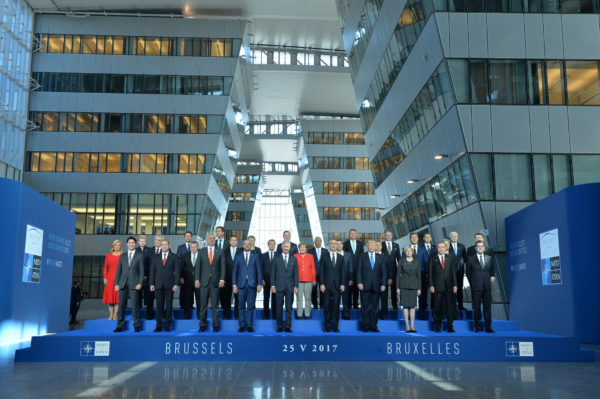 Look at the results of this photo op. Dramatic background and world leaders evenly spread out. In an official photo concerning politics, obviously you reserve the front row for the important people. (In a school class picture that’s where the short kids stand, but I digress.)

Naturally the hosts take center stage. The three men in the center from left to right are the Prime Minister of Belgium (blue suit and glasses), the king of Belgium, and then the Secretary General of NATO. The President stands immediately to their left. He looks presidential, he’s a leader. How do we know this? He’s in the front row. It’s what the photo communicates, and that’s what the photo op is for.

Yet, again, a video exists that undermines this perfect photo of our leader. Again, since you’re reading this online, I assume you’ve seen the video leading up to this photo op moment. Its power is such that I don’t even need to show you the video, because I’m sure you can imagine it right now. Looking at that picture from the NATO summit, all I can imagine is the shove from the President to get to the front, making sure his photo op isn’t wasted. No matter how good the final photo looks, the video undermines him.

When focusing only on the final product of a photo op, it doesn’t matter how you get there, as long as it looks good in the end. But in this artist’s mind, the final image is the only medium he seems to know how to work in, and he hasn’t adjusted to the fact that now we can see how his ‘art’ is made, and it’s ugly. He’s crude with his process—his staging and props undermine his message. Without him fully realizing it, his medium changed, and he’s failing at what he once did best. Failing badly.