Sugar Land Gets a Selfie Statue 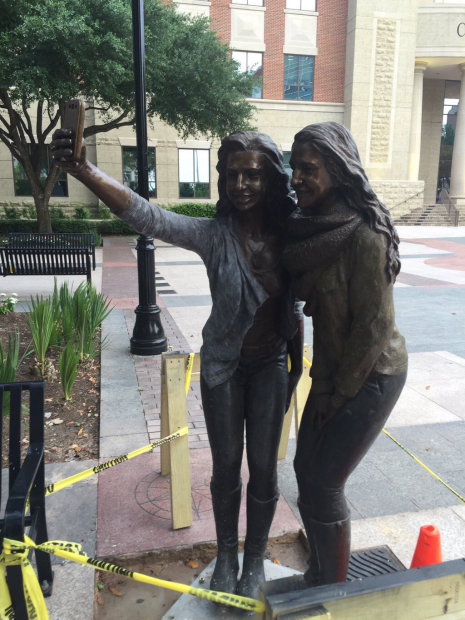 It was recently announced that the ever-growing Houston suburb of Sugar Land has installed two sculptures in the city’s Town Square public plaza. The new artistic additions, however, are a far cry from the heroic, larger than life monument dedicated to Stephen F. Austin that already calls the plaza home.

One of the cast bronze statues, the lesser of the two evils, sits on the ledge of the square’s fountain and depicts a man playing a guitar. The other statue shows two girls taking a selfie. A press release states that both of the works “show activities common in the plaza.” Additionally, the City of Sugar Land had this to say:

The inclusion of sculpture in the Town Square plaza aligns with the continued vision of the City and the Legacy Foundation’s commitment to establish cultural arts amenities that “provide and/or support activities and facilities that enrich the artistic, cultural, educational, and historical character of Sugar Land.”

The two sculptures installed in Town Square are part of a ten piece collection donated to the city by Sugar Land resident Sandy Levin. Two more statues from Levin’s collection (both depicting alligators) were installed in Sugar Land Memorial Park.

Residents of Sugar Land have already taken to social media to express their displeasure with the new works on view (and, of course, the city responded on their official twitter account): 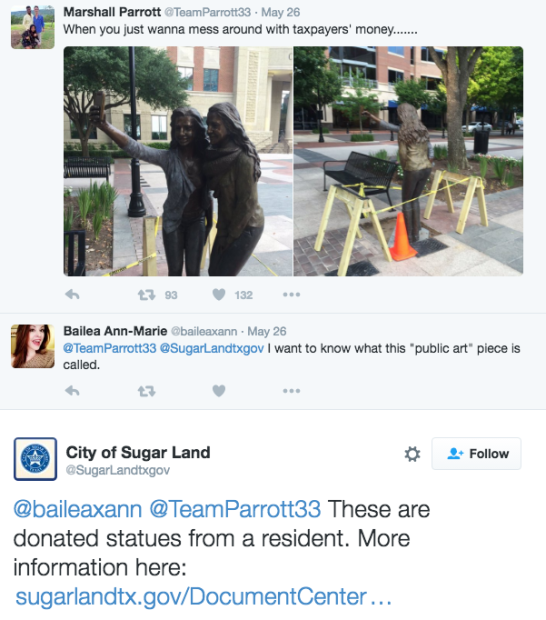 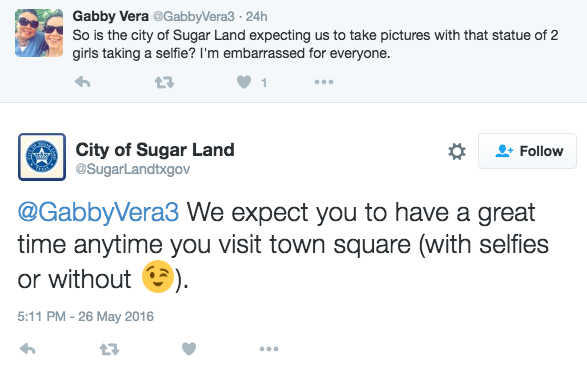 Readers: what are your thoughts on the statue?

What’s “evil” about the statue? Seems just fine, and reminds me of the many historic artworks that feature a person looking at their self in a hand mirror.

Like I commented before about all the bronzes @ Kyle Field, College Station…… whats’ with all the bronzes..? Has there
been some breakthrough in bronze casting technology that lowered the price? Bronzes at one time were few and far between.

My dad works for NOAA and just rushed home from the south pole observatory to say the irony of social media users with selfie avatars complaining about a monument in their honor is causing global tsunamis thanks a lot.

I think this is a great way to engage the next generation into thinking that the arts are not a lot of snobby old people. This shows that they can indeed, see both the amusement of the older generation and the grace they receive from that group.
A completely interactive statue. When I showed this to a set of teens studying social media marketing they were thrilled and said, all young people at heart would strike the same pose and take the pic with the statue. Worth a road trip to Sugarland…do I hear increasing tourist dollars at the registers in Sugarland? I think so….