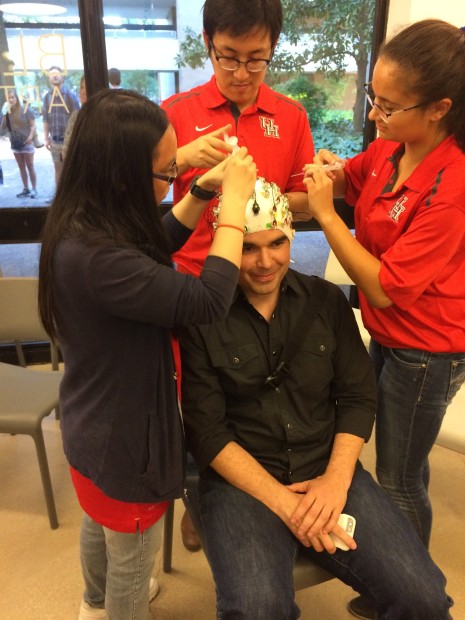 Dario Robleto getting wired up. Image via houstonpublicmedia.org

Researchers from the University of Houston (UH) have analyzed brain activity data collected from more than 400 people who viewed an exhibition at the Menil Collection, offering evidence that useable brain data can be collected outside of a controlled laboratory setting. They also reported the first real-world demonstration of what happens in the brain as people observe artwork, reports the UH newsletter.

The art viewed in the study was last year’s “The Boundary of Life is Quietly Crossed,” a huge exhibition of Dario Robleto’s work. The research found significant increases in functional, or task-related, connectivity in localized brain networks when the subjects viewed art they considered aesthetically pleasing, compared with baseline readings. They found differences both between men and women and between the youngest and oldest subjects.

“As an artist, it’s been a dream of mine to contribute useful data to scientists,” Robleto told the Houston Chronicle last year. “It just so happens that the one scientist that I would want to work with is at UH.” That scientist was UH researcher Jose L. “Pepe” Contreras-Vidal, widely known in the medical community for his work on thought-controlled robotic exoskeletons.

The ultimate goal of the study was to observe common patterns in the visitors’ brainwaves in order to isolate the effects of an aesthetic experience and the findings may help in Contreras-Vidal’s quest to reverse-engineer the brain and map thoughts and neural networks inside of the human mind. The researchers also collected data from artists as they created work.

“I don’t think we will understand the mystery (of how art is created),” Contreras-Vidal’s said. “The conception of art is a very individual process, built on the artist’s experiences, skills, memories, values and drives. But we will know what happens in the brain. We might find that there are people who are very attuned to visual art, or to music, or poetry, and there might be an underlying common neural network. If we know that, we could optimize the delivery of art for therapy, for teaching.”