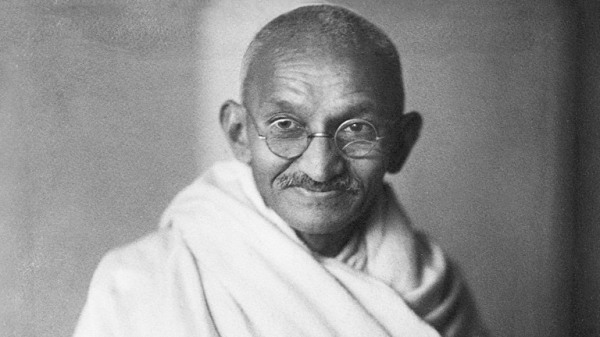 Happy Birthday to Mohandas Karamchand Gandhi (or “Mahatma” [high-souled] Gandhi, or “Bapu” [Papa]), who was born 145 years ago today! October 2 is also celebrated in Gandhi’s honor as the International Day of Non-Violence.

In the midst of the world currently going to hell in a handbasket and all, it’s refreshing to see everyone’s favorite non-violent freedom fighter for civil rights and religious pluralism being the focus of a humongous number of upcoming visual arts/performance arts/educational/spiritual events. Most programs have been organized in conjunction with Houston’s Menil Collection’s exhibition of Experiments with Truth: Gandhi and Images of Nonviolence, which opens tonight (reception at 7-9pm, after a 6pm conversation between Menil Director Josef Helfenstein and exhibiting artist Amar Kamwar).

The Menil Collection’s extensive programming seems totally in line with the de Menil’s original mission. Jean and Dominique de Menil were not just patrons of art, but serious vocal champions of human rights locally and worldwide. Now, at the Menil and throughout Houston, there will be dozens of performances, concerts, demonstrations, gatherings, poetry and book readings, off-site exhibitions, film screenings, and lectures.

In North Texas, UT Arlington will celebrate Gandhi’s birthday with a lecture by his great-grandson Satish Dhupelia this afternoon and, in Irving, the Mahatma Gandhi Memorial of North Texas will open this evening at 5pm with a dedication ceremony.