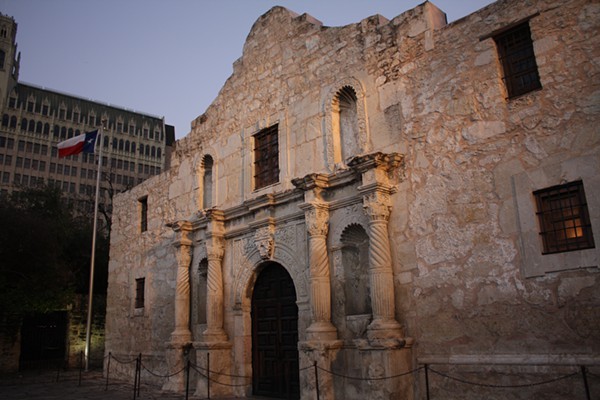 Only a couple of months after the Alamo was designated a UNESCO U.S. World Heritage site, deeming it of “outstanding cultural or natural importance to the common heritage of humanity,” a 22-year-old Laredo man allegedly used his car keys to carve his name into the limestone walls of the Alamo’s Monks’ Burial Room.

The San Antonio Express-News reports that Julio Perez was arrested after a tour guide spotted him scratching his first name into the 250-year-old interior limestone wall of the state shrine. The guide contacted an Alamo Ranger who handcuffed the vandal as he tried to flee the building with his companion. Perez was charged with criminal mischief and placed in jail on a $20,000 bond, San Antonio police officials said. While the carving was only 1” x 3”, preservation experts are assessing the damage and planning repairs, which could cost up to $250,000.

In 2012, a 21-year-old man from El Paso was arrested after urinating at the base of the church’s facade. He was sentenced by a judge to 18 months in a state jail and ordered to pay $4,000 in restitution.

Since recent studies show that men mature at a shockingly slower rate than women, perhaps Texan males in their early twenties should not be allowed into the Alamo without proper supervision.

The Alamo is not the first place in Texas to be recognized as a UNESCO World Heritage site; that distinction goes to Pine Canyon in the Chisos Mountains of Big Bend National Park, so designated decades ago. While the Alamo may be the first site chosen as a cultural touchstone and the Canyon’s presence is wholly due to its natural beauty and significance, the latter does predate the former on this august list.

I see this as a display of making someone an example. The guy is still a kid, but honestly who isn’t when people try to leave their mark behind. Carpe diem, right? Hold on to your childish inhibitions. The charge is outrageous for what he did. He’s a high price vandal. The experts who assessed the damages are pure gluttons. Are they going to clean the entire facade and put new furniture in the building? I’ll apply to do the job for the restoration of that 1″ x 3″ carving. And 18 months for one person pissing on the facade of a church should not be a crime punishable for 18 months… Seriously? Who are the Italians? Oh yeah, the Vatican and the Duomo in Florence. Who hasn’t proverbially pissed on those buildings or in reality. That’s why the buildings in France stink too. We must really do a great job in keeping our streets clean and focused on real priorities in the States.

I read a story in the dallas morning newspaper yesterday where an attorney and two men swiddled an 88 year old elderly woman to will her mansion to them as she layed on her deathbed. Judge sentenced them to 30 days in jail and 4 year probation. A guy urinates on the alamo gets 18 mos. jail sentence.

COME AND TAKE IT!

Seriously though… pick up your trash and use a damn outhouse.