And All the World is Football-Shaped 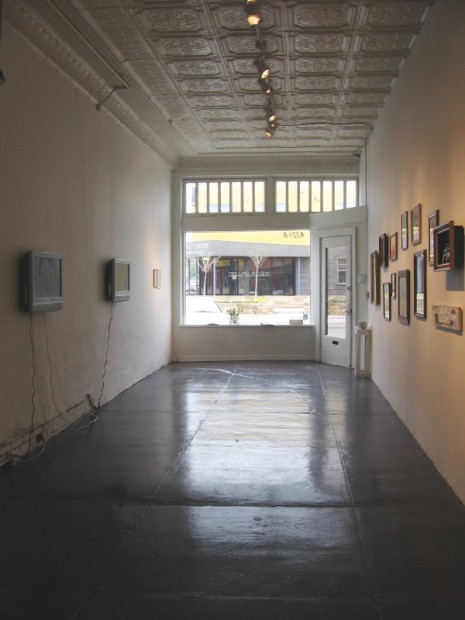 Here I offer a brief meditation on a city’s (mostly positive) growing pains.

Last week I wrote a small news item for Glasstire about two Deep Ellum galleries moving to the Design District. One of them, The Public Trust, had been at its Commerce Street location since 2006, and the other, Liliana Bloch, joined it in the same building in 2013. In one bit of press about the move, Bloch said something about how much she won’t miss the parking problem at the old space (there was no dedicated parking for their galleries) and in sympathy I was thrown back to 2005 when I was trying to decide where to open a gallery in Dallas and all the small and large decisions that go into picking a neighborhood, and how much the neighborhood says about the aspirations or personality of an art space.

But if I were advising someone today on where in DFW to open a space, I would be as conflicted now as I was back then. I suppose the first question I would ask is: “What do you want to show?” followed quickly by “Do you expect to actually sell work” and “Do you want to do this for the rest of your life?” I’m sure many would say the Design District is the obvious choice for long-haulers. Galleries in most cities concentrate with good reason.

But theoretically, someone could open up a gallery in a run-down stripmall in Garland, and if the owner is smart and charismatic and the art is strong, the gallery could rack up street cred—even nationally—very quickly with an insider art crowd, even if well-heeled collectors wouldn’t venture there. The owner would of course have to commit himself to a separate day job to keep his lights on, just as one stratum of chattering class would wonder if the Design District was over and Garland was the new thing. I’m exaggerating, but not by much. Some of the most compelling and still-romaticized spaces in Dallas over the last ten or fifteen years were geographical outliers in their time: And/Or, Angstrom, Mulcahy Modern. (They’re closed now, but not due to location. Their owners’ agendas couldn’t be categorized any more than their spaces could.) The pure labor of love could turn into a money maker, of course, but I don’t really think anyone opening any kind of space in Dallas these days should be able to count on actually making serious money, just as I don’t think any Dallas artist should believe any Dallas gallery could launch his international career right now. That’s not what regional galleries are about these days. Attention spans are short and entry and mid-level collectors are spread very thin. It’s a good time to live in the moment.

The traffic situation inside the loop of Dallas really does seem to get worse by the day. People are increasingly stuck in their cars and resigned to it, and it feels to me like nowadays people will just go to wherever the action is cropping up (something they resented ten years ago) as the action continues to spread: Trinity Groves, the Cedars, Oak Cliff. I wouldn’t be surprised if the area well past the Design District, off Irving Boulevard (and I mean southwest Irving) starts to see some gallery action (artists’ studios are already there, and we know what the gentrification cycle looks like), but I would place bets on more happening in the Peak and Haskell/Fair Park area before that, and also probably mid-Oak Cliff, well south of Bishop Arts. Not long ago a perceptive person at the helm of a big non-profit compared this growing Dallas to Los Angeles in terms of its non-centralized nature. I don’t look forward to knowing that over the coming years every car trip I make will be a minimum of 45 minutes, but I do enjoy Dallas developing a lot of interesting discrete neighborhoods where anything could happen. Just as Dallas holds up its Arts District as its centralized crowning achievement, the city’s unassuming margins are looking increasingly seductive.

I suppose in the end I would advise a non trust-fund person to only open a space in Dallas if they love to hustle and they don’t mind losing money and they just have a passion for showing great stuff they’re not seeing elsewhere. I’d tell them to look for a cheap storefront out on the peripheries. I’d tell them to make it more like a social club or salon than a shiny commercial endeavor, and to do things that bring lots of local artists into the space to look and talk, because that’s what makes a scene, and makes a space feel grounded and worthwhile. I’d tell them to make sure people have a place to park.

I thank you for the kind words, Christina.

I find myself often wondering where the hell someone would pioneer a new area for a gallery these days. I left my space for many reasons, none of them economic, but I could see the writing on the wall in terms of the real estate. My old space in the Bishop Arts is now one of two or three five-star Dallas restaurants, so I’d say Oak Cliff is indisputably way over, even mid-OC as you suggest.

But I still think the most interesting and experimental galleries will always find new areas or even new models. And the same applies to artists as well. I admire most those who make their own way as opposed to the trend copiers. Admittedly, I really dislike the design district and the corporate, non-experimental feel of most of the galleries and I keep hoping some newbies will do something radical.

Someone should open a gallery in the design district devoted to experimental art for doctors’ offices.

Plus a concentration of galleries. While there are some great “destination” galleries in Dallas and Fort Worth, I’m more likely to visit the Design District and hit eight galleries the same evening. Likewise, Colquitt Street when I’m in Houston.

Marketing 101: There is a reason there is a gas station on all four corners of a busy intersection.