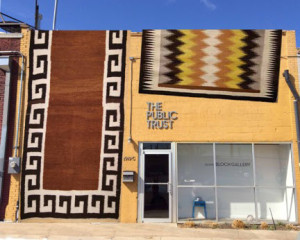 no mas… see you in on Monitor Street!

As Deep Ellum transitions, the siren song of the Design District can’t be silenced.

The Public Trust opened its doors on Commerce Street in Deep Ellum in 2006 (then under its original Denton name, Art Prostitute); a couple of years ago Liliana Bloch opened her space-within-a-space at the same address and the two galleries have co-existed since. Now both galleries are moving to 2271 Monitor Street in the Design District (next door to Gallery Urbane) and will remain next-door neighbors, albeit in physically separate spaces (much like Holly Johnson and Cris Worley’s new set up). The Public Trust closed its Deep Ellum location two days ago.

Both galleries are looking to reopen in April. Liliana Bloch will kick things off at her new space with a solo show by Fort Worth’s Letitia Huckaby. In the meantime, Deep Ellum is undergoing a major, restaurant-heavy (so far) re-imagining by several developers, most notably Scott Rohrman, and we’ll be curious to see how that jibes with the few remaining art galleries in that neighborhood.

what ever happened to Road Agent?

Liliana Bloch will also be at 2271 Monitor, that address was a typo in her release. We will have completely separate spaces within the same building, much like Cris Worley and Holly Johnson have done on Levee.

Thanks, Brian! I will correct it and make note of the HJ/CW similarity.

Haha, typo in the first hyperlink on this page.

Fixed. Thanks. But it was funny.